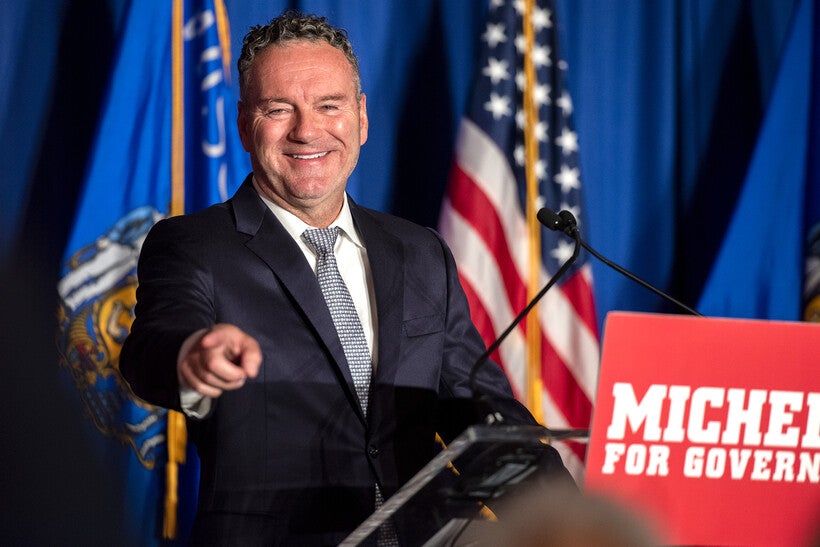 Tim Michels points at the crowd after winning the republican primary for governor Tuesday, Aug. 9, 2022, in Waukesha, Wis. Angela Major/WPR

Construction executive Tim Michels has won the Republican primary for governor in Wisconsin, defeating former Lt. Gov. Rebecca Kleefisch with the help of a "political outsider" message, millions of dollars of his personal wealth and a critical endorsement by former President Donald Trump.

Unofficial totals from the Associated Press showed Michels defeating Kleefisch 47-42 percent. Republican Tim Ramthun, the state representative who made a name for himself by calling for the decertification of the 2020 election, came in third with 6 percent of the GOP vote.

"I'm here to say the American dream is still alive, and good people need to step up and run," Michels told a cheering crowd at his campaign victory party in Waukesha. "We're going to get an outsider, a businessman and a veteran in the governor's office."

The win means Michels will take on Democratic Gov. Tony Evers in November in what will be one of the closest-watched races for governor in the country.

Michels won his race by performing well in a wide swath of rural counties that have supported Trump in his runs for office, but he also performed better than Trump in some suburban counties. For example, Michels carried one of the vaunted "WOW" counties in southeast Wisconsin, winning Washington County while Kleefisch narrowly won Waukesha and Ozaukee counties. 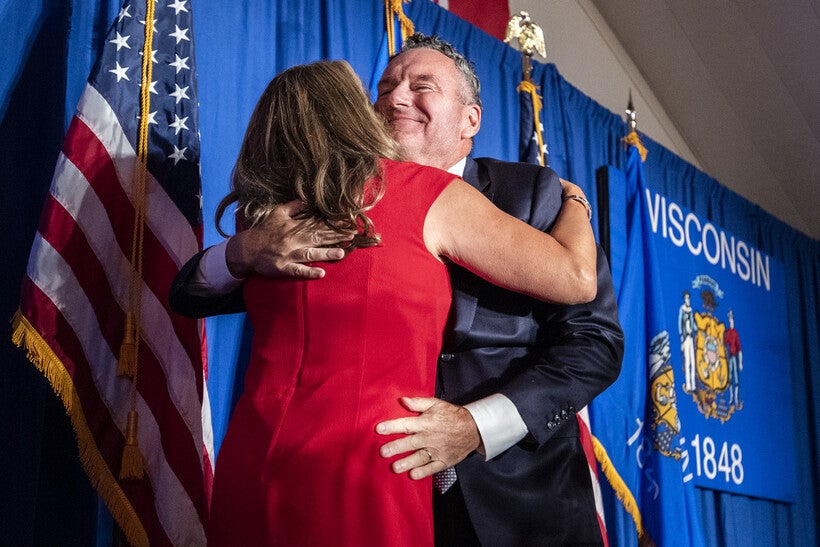 In a brief concession speech just after 10:30 p.m., Kleefisch thanked her supporters, roughly 150 of whom showed up to her election night event at a pub in Oconomowoc.

Her speech was a quick one, but she encouraged her supporters to "stay in the fight."

"The fight now is truly against Tony Evers and liberals who want to take away our way of life and I honestly still believe that hard work does still matter, particularly in our local races," she said.

Michels' victory Tuesday dealt a blow not only to Kleefisch, but also her allies, namely former Gov. Scott Walker and the state Republican Party apparatus he helped build. Walker campaigned hard for Kleefisch, who was backed by a long list of Republican stalwarts including former Vice President Mike Pence. She was also endorsed by Republican-leaning groups including Wisconsin Manufacturers and Commerce, the state's business lobby.

Kleefisch spent years building the foundation for her run for governor, and after Walker announced in 2019 that he would pass on running for office this year, she became the presumed frontrunner. In September 2020, she launched the 1848 Project, a conservative advocacy group that she would initially lead. A year later, she formally declared her candidacy for governor, and for a while, it looked like she might have the field to herself.

It didn't last. In January, Republican Kevin Nicholson, an ex-Marine and business consultant who ran a failed bid for the U.S. Senate in 2018, formally launched his campaign for governor, attacking Kleefisch as part of a "broken" political machine.

A couple of weeks later, Ramthun entered the race for governor after being lauded by Trump for his effort to pass a resolution to "decertify" Wisconsin's 2020 presidential election, a move election law experts say is impossible.

But while Ramthun received praise from Trump, he never received his endorsement. Neither did Nicholson, whose own "outsider" campaign failed to move the needle significantly in publicly-available polling. Trump also passed on giving his endorsement to Kleefisch even though — like the other candidates — she lobbied for it.

It left an opening for Michels, who formally launched his campaign in April. Michels' "outsider" message bore striking similarities to Nicholson's, and his personal wealth was enough to amplify it in a massive TV ad blitz. Through Aug. 6, Michels had donated nearly $12 million to his own campaign. In early June, Trump endorsed Michels, and by late June, polling suggested he had drawn the race with Kleefisch to a virtual tie.

Kleefisch hit back hard, attacking Michels with Walker's help over Michels Corporation's involvement in groups that had supported raising the gas tax. The company was also part of a coalition that fought Wisconsin's "right-to-work" law banning mandatory union dues at private sector businesses.

While Michels initially called the attacks a sign of desperation, before long he was attacking Kleefisch, running an ad that called her "pro China" for a trade mission she led there in 2014 as lieutenant governor. The conservative Club for Growth also attacked Kleefisch with a similar message. 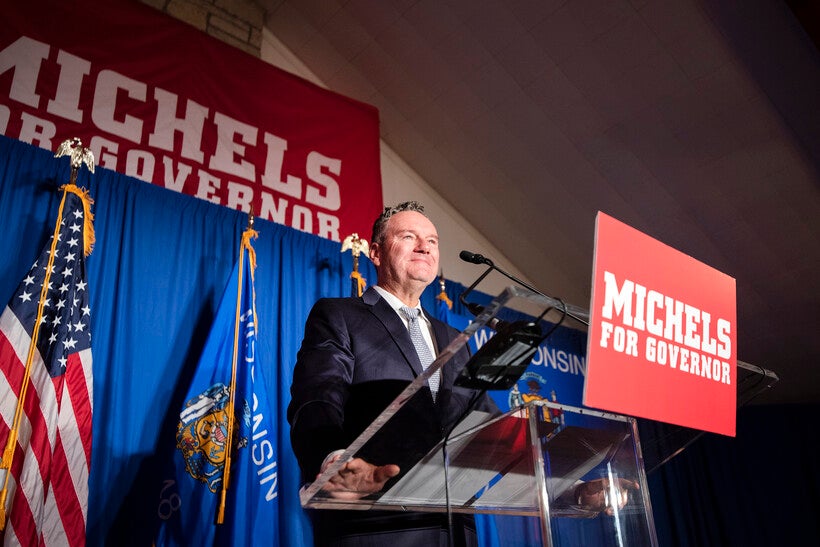 Trump visited Waukesha for Michels on the Friday before the election and laid bare the divide in the Wisconsin GOP, attacking Kleefisch as "the handpicked candidate of the failed establishment." Michels, he said, was the only candidate who could win in November.

Whether or not his support is what tilted the race toward Michels, Trump can undoubtedly claim a high-profile victory in Wisconsin, a state he's lost twice before, most recently in 2020 and before that in the 2016 Republican presidential primary.

Michels thanked Trump in his victory speech, saying it was a "tremendous validation" of his campaign. Michels' victory came a day after the political world was shocked with news that the FBI had raided Trump's Mar-a-Lago home and resort.

That's not to say Michels is assured to win a general election campaign in divided Wisconsin against Evers, whose low-key style has served him well in statewide elections. Evers' approval remains relatively high in Wisconsin despite political headwinds that are working against Democrats.

In a statement, the Evers campaign warned that Michels had staked out "extreme" positions during the primary on issues like voting rights, gun safety and public education.

"After a scorched earth primary that’s seen constant attacks and a dizzying race to the radical right, the Republican Party has chosen the most extreme and divisive nominee possible, one that will tell Donald Trump anything just to keep his endorsement," said Evers campaign manager Cassi Fenili. "While Tim Michels wants to divide our communities, Gov. Evers is committed to bringing people together." 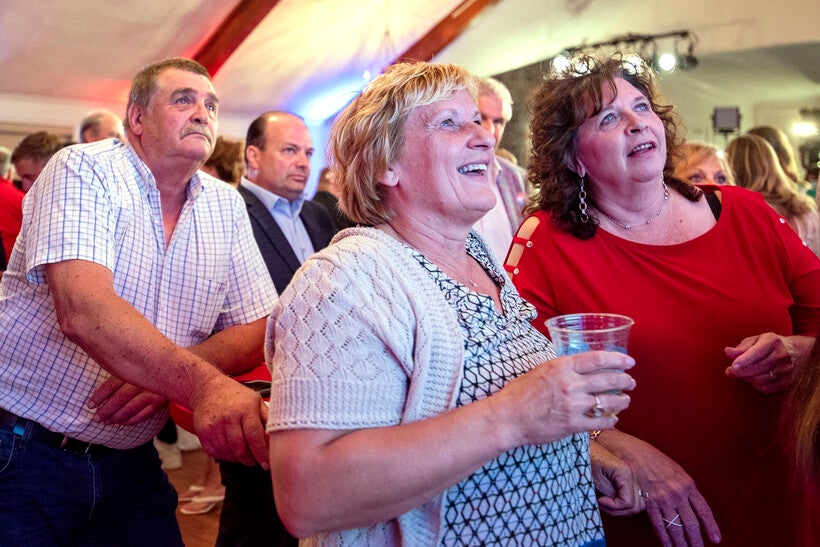 Along with Wisconsin's race for U.S. Senate, the race for governor is likely to be fiercely competitive. Thirty-six states will hold elections for governor this year. Wisconsin is one of just four of those races considered toss-ups by the Cook Political Report.

The governor's race is also noteworthy because of what's at stake. Should Evers win, he'll be able to continue using his veto pen to block major pieces of the GOP agenda in Wisconsin. Should Evers lose, and Michels becomes governor, it could open the floodgates to a new wave of Republican laws that rival what Walker signed when he first took office more than a decade ago.