Donald Trump's march to the GOP presidential nomination was all but certain in March 2016, but the Wisconsin Republican Party and its powerful allies in conservative talk radio had other ideas.

Led at the time by U.S. House Speaker Paul Ryan, Gov. Scott Walker and Republican National Committee Chair Reince Priebus, Wisconsin Republicans didn't like Trump, and they were bound and determined to stop him. They had a plan: Rally around Trump's primary opponent, Texas U.S. Sen. Ted Cruz, and set off a chain reaction in states that vote after Wisconsin.

They were not shy about this. Their plan was widely circulated. They had financial backing from the national Club for Growth, a conservative group whose leader vowed Wisconsin would be a "game changer."

Walker, who had called on the party to rally around a "positive, conservative alternative" to Trump when he ended his own presidential bid in September 2015, endorsed Cruz, and so did other Republicans. They included U.S. Rep. Glenn Grothman, who compared Trump's behavior to an 8-year-old child.

Leading the charge was conservative talk radio, with hosts in Milwaukee, Madison and Green Bay spending hour after hour, day after day criticizing Trump to their thousands of listeners in the Republican grassroots. Cruz, meanwhile, crisscrossed the state with Walker by his side.

Establishment Republicans in other states had failed to crack the code for stopping Trump, but the Wisconsin GOP was a different story. It had been battle-hardened by Walker's victories in the 2012 recall and 2014 re-election campaigns. Trump, who had no roots here, was no match.

By April 5, 2016, the plan was complete. Cruz defeated Trump soundly to win Wisconsin.

But the rest of the plan fizzled: Trump hasn't lost another election since.

"I did think that we were going to be this firewall of rationality," said Charlie Sykes, the longtime conservative talk radio host and self-described "#NeverTrump" conservative who has since left the airwaves at WTMJ-AM in Milwaukee. "Instead, we turned out to be this minor speed bump."

'A Postcard From Another World'

To fully appreciate how far Wisconsin Republicans have come on Trump, it helps to look back at where they started.

Trump looked very much like an underdog in Wisconsin's 2016 presidential primary. He had no statewide officials supporting him in Wisconsin, and for most of the primary campaign, no state lawmakers either.

Trump's lone Wisconsin surrogate was Van Mobley, the village president of Thiensville, a small community of about 3,100 residents in Milwaukee's northern suburbs.

"At that time I was the only elected official who had endorsed Trump in the state, and when the attention of the nation turned on Wisconsin, we expected that I would get more than my fair share of press," Mobley said. "And I did."

Mobley, a professor at Concordia University with degrees in economics and history, said he was initially drawn to Trump because of his opposition to trade deals, which were widely backed by GOP leaders in 2016. But he thinks there were other reasons Wisconsin Republicans were slow to rally to Trump.

"A big part of it was the GOP establishment in the state — and by that I mean Paul Ryan, Scott Walker, Reince Priebus — they had imagined a lot of futures, and a lot of those futures were with themselves at the center of the Republican Party on the way forward," Mobley said. "And they certainly had not envisioned Donald Trump."

But it wasn't just Ryan, Walker and Priebus who were uneasy with Trump.

While he had been embraced by national conservative media figures like Rush Limbaugh and Sean Hannity, Wisconsin's conservative talk radio hosts were roundly opposed to Trump.

"I was not a Trump fan initially because I knew some of his background," said Jay Weber, a conservative talk radio host at WISN-AM in Milwaukee for roughly two decades. "I knew that he's had an abrasive personality and was sort of a hotshot. He just doesn't go with Wisconsin nice. The brash New Yorker doesn't mesh well with Wisconsin nice."

Trump figured this out the hard way. As Wisconsin's primary neared, he made the rounds on Wisconsin's conservative talk radio circuit where Sykes and others grilled him.

Cruz, meanwhile, had the Wisconsin Republican machine on his side.

It's not that he was a natural fit. Most had endorsed Walker's bid for president in July 2015, but that only lasted about two months. The next choice for many Wisconsin Republicans was Florida U.S. Sen. Marco Rubio, but his campaign was no match for Trump either.

That left Cruz and Ohio Gov. John Kasich as the last men standing, and Cruz had amassed far more delegates. Wisconsin conservative talkers quickly picked up his cause, and Sykes effectively kicked off Cruz's primary campaign, inviting Cruz and his wife, Heidi Cruz to one of his annual banquet shows.

"I have a picture up on my wall of Ted Cruz, Heidi Cruz, and me, standing there. And I'm shaking his hand, and I'm telling him we're going to do everything we can to stop Trump here in Wisconsin," Sykes said. "It feels like a postcard from another world." 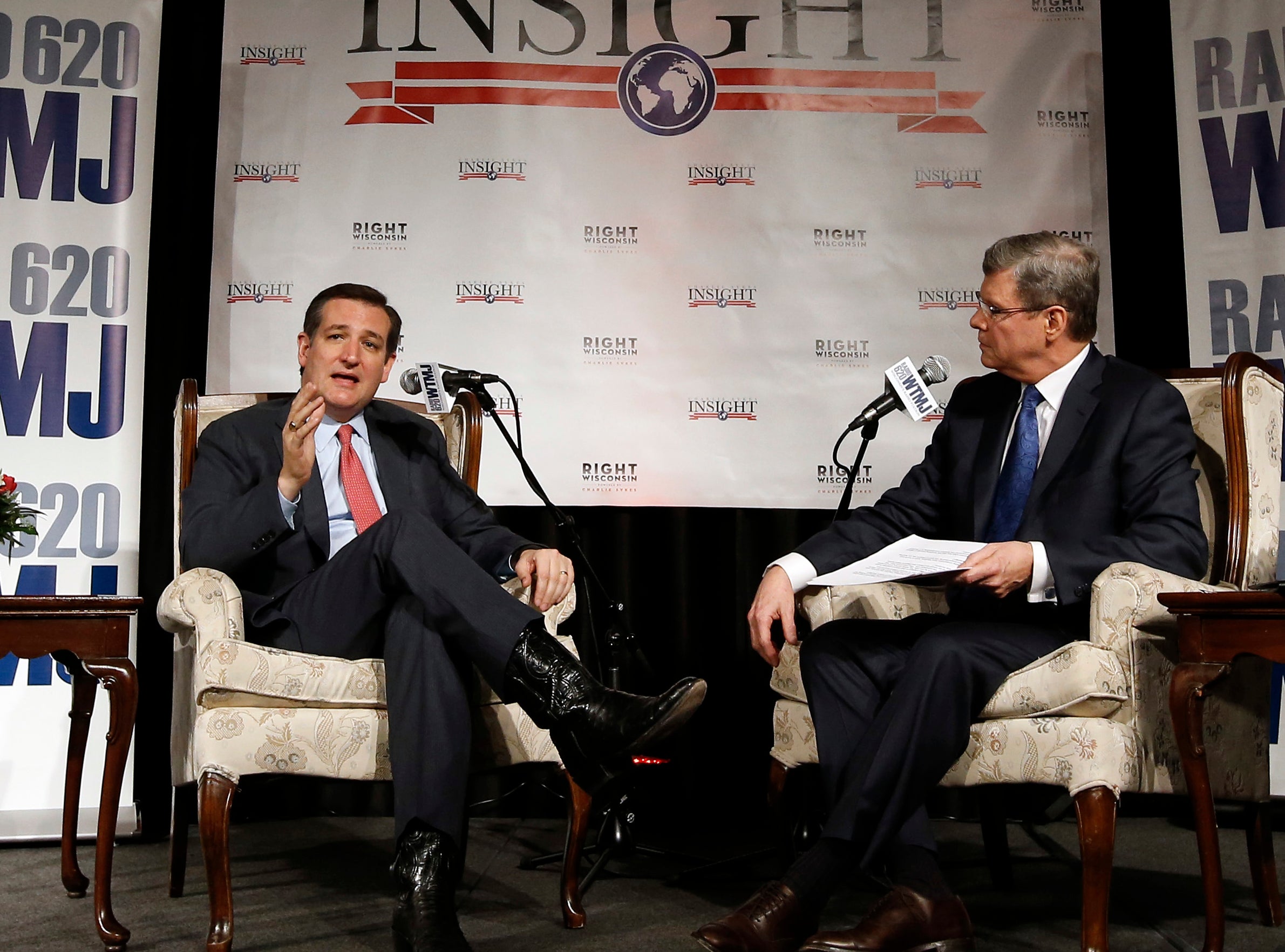 Whatever political momentum Trump had been building just stopped, albeit momentarily, in Wisconsin. Republicans nationally had been headed his direction, but Wisconsin Republicans turned on a dime and headed the other way.

Sykes and Weber insist this wasn't tightly coordinated or part of a master plan. Wisconsin Republicans, Sykes said, had been through some "political wars" during the Walker years, and his listeners knew how they felt about Trump.

"There were no meetings to discuss it," Sykes said. "It was just ... Donald Trump seemed utterly unfit to be president, and frankly, rather ridiculous."

This was the low point for Trump in Wisconsin. You can see it in a couple sets of numbers.

One came from the ballot box. On primary Election Day, Cruz received about 48 percent of the Republican vote while Trump received 35 percent.

The other came from a Marquette poll released about a week before Election Day. It showed among Republican voters, 51 percent had an unfavorable view of Trump compared to just 36 percent who viewed him favorably.

Trump never led Democrat Hillary Clinton in any Marquette poll from 2016, but Marquette pollster Charles Franklin said the surveys did show people who lean Republican were warming to him as the November election drew near.

Then something happened. Trump became president.

To put that in context, it matches the high-water mark for Walker, who hit 95 percent job approval among Republicans once in 2012, the year that he became the first governor in United States history to win a recall election, thrilling the GOP base. Among Republicans that year, Walker was practically a folk hero.

"I think that we saw extreme polarization in the Walker era. We see extreme polarization now," Franklin said. "It is always a vivid demonstration of the power of partisanship that as a party's candidate is converted into their nominee and perhaps then converted into their president, people of the party find reasons to like that candidate better and better."

As GOP voters warmed to Trump, so did most of conservative talk radio.

Sykes has been the most outspoken exception, but Jay Weber said he began to like Trump soon after he was inaugurated and began rolling back many of former President Barack Obama's executive orders.

"It became apparent that this was a guy who stepped out of private industry and was something different, and he intended to keep his promises," Weber said.

"I believe it's them who have moved, who have found reasons not to like the president or like what he's doing," said Jay Weber, a conservative Milwaukee talk radio host.

Weber rejects the idea that Trump's surge in popularity among Republicans is a product of political circumstances. He said Trump's tax cut and deregulation efforts have been huge for Republicans, along with his focus on controlling the U.S.-Mexico border.

Weber said Trump has been able to accomplish things Sykes and other Republican "#NeverTrump-ers" had been pushing for decades.

"I believe it's them who have moved, who have found reasons not to like the president or like what he's doing," Weber said.

Sykes sees it differently. He thinks the Republicans who support Trump today are driven by a "residue of the hyperpartisan battles" they had during the battle over Walker's Act 10 legislation limiting union power in Wisconsin and his recall.

"I think that the whole Walker Act 10 recall — the passions that were unleashed in that — have translated into a very intense tribalism among Republicans," Sykes said. "I did not think it would extend to embracing Donald Trump. But I was wrong about that."

Sykes said the transformation of Wisconsin Republicans — from Trump's sharpest skeptics to his most ardent supporters — is unmatched anywhere else.

"You cannot overstate that, how dramatic that is," Sykes said. "To realize that we went from there to where we are here. Which is why I keep that picture of Ted and Heidi Cruz up on the wall. You look at that and you go, 'Wow, f--- me.'"