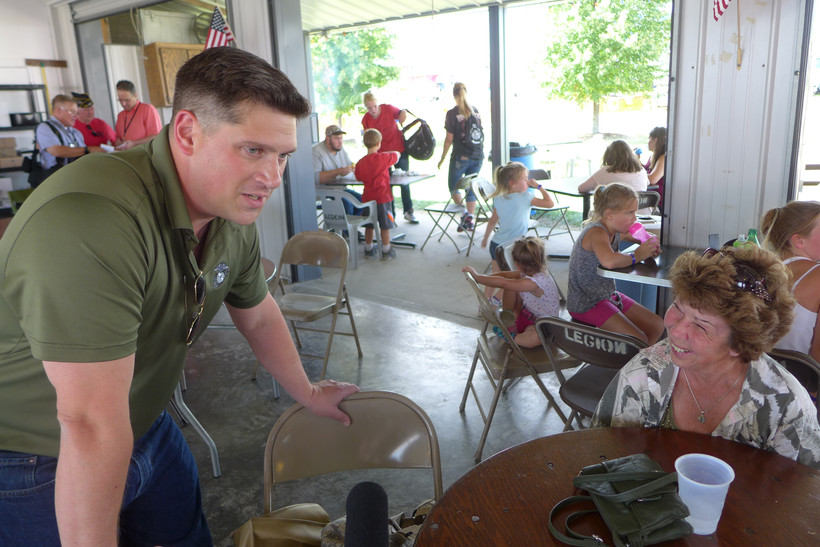 The First-Time Candidate Has Benefited From Millions Of Dollars In Donations From GOP Mega-Donor Richard Uihlein
By Shawn Johnson
Share:

Eighteen years ago, Kevin Nicholson was the president of the College Democrats of America. Today, he's within striking distance of becoming the Republican nominee for Wisconsin's U.S. Senate race.

The Delafield businessman, who's making his first run for office, said life changed him after college, especially his service in the U.S. Marine Corps. Some people are quiet about their military service. With Nicholson, it's nearly impossible to miss. 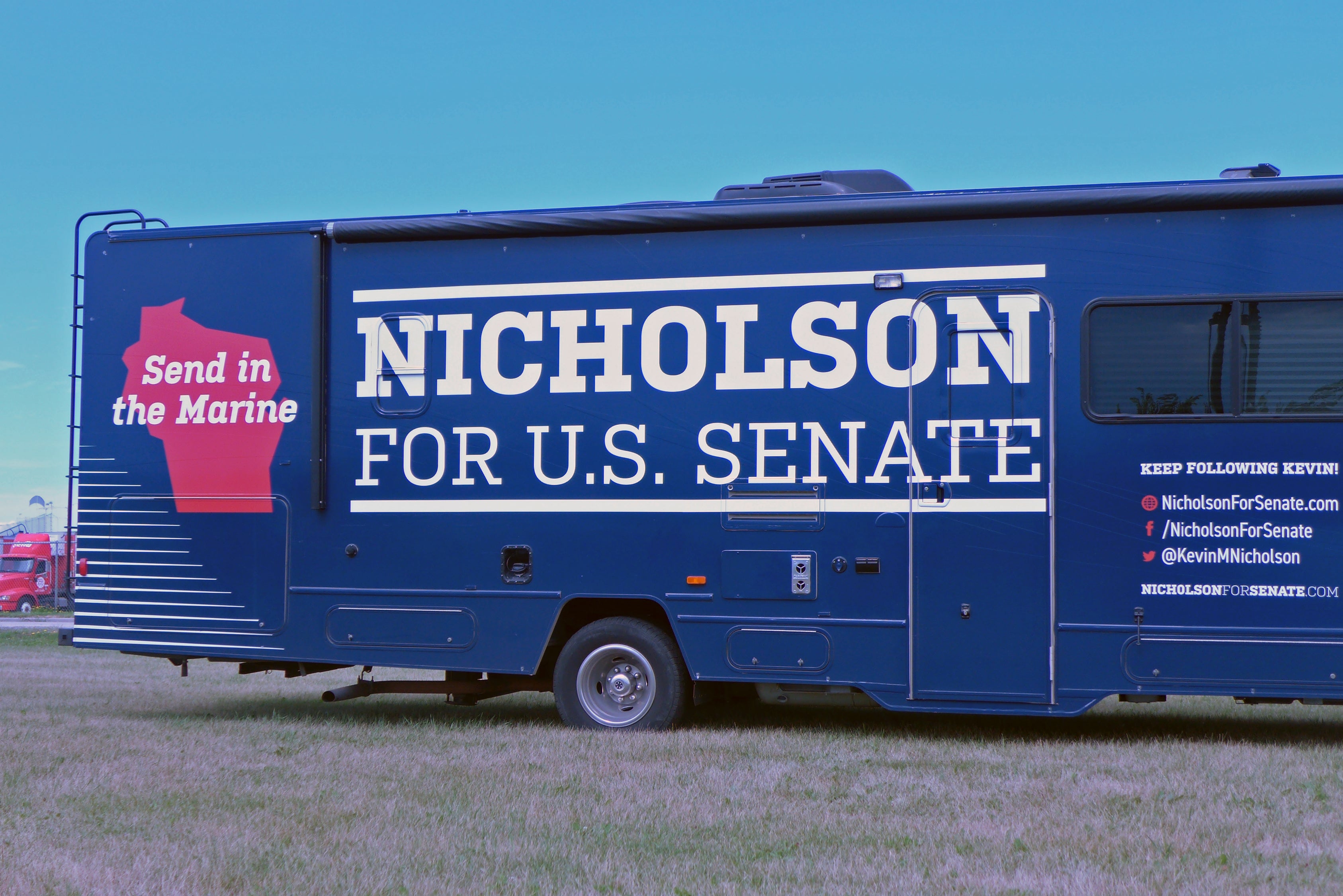 U.S. Senate candidate Kevin Nicholson's RV with the slogan "Send in the Marine" painted on the side. Shawn Johnson/WPR

His campaign shirts say, "Send in the Marine." It's printed on the side of his RV. And when Nicholson shook hands with fellow veterans at the Washington County Fair recently, he told them about his service, too.

"I served from '04 to '09 in the Marine Corps," Nicholson said to one table of voters. "I wouldn't trade it for anything. You could say the same thing. Not every day was fun, but I would do it over again in a heartbeat."

There's a reason he talks so much about his military service. For some voters, it works.

U.S. Navy veteran Alan Peters of West Bend said he was impressed by what he heard from Nicholson and more likely to support him because he's a veteran.

"I'd like to say no, but if someone did serve in the military, I think I can relate to them a little better," Peters said. 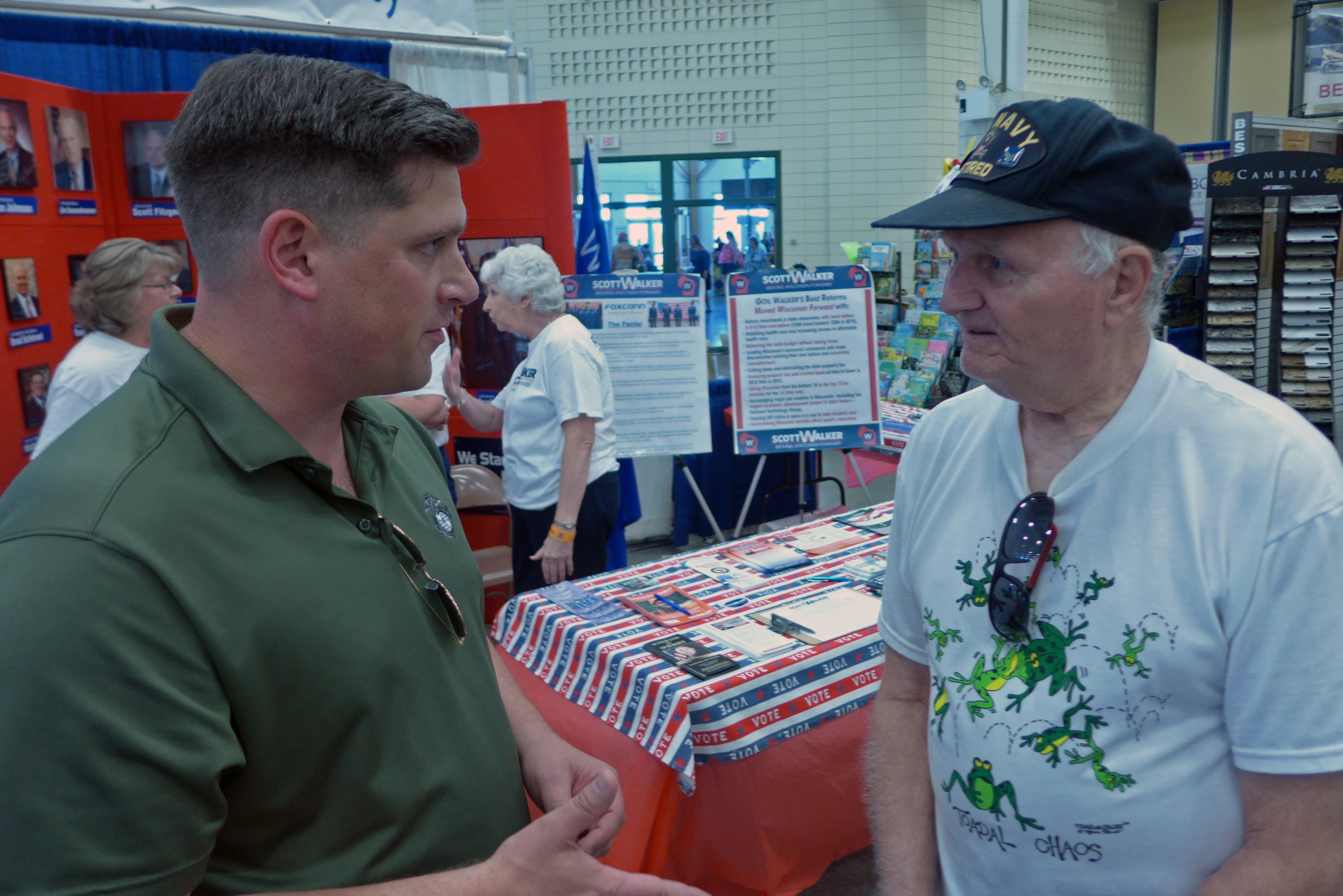 He said it was about this time that he started to become disenchanted with politics.

"I saw a Democrat Party that I didn't really like in many different ways," Nicholson said. "I thought it was obsessed with race, class, gender, ethnicity. And I thought that obsession was going to rip people apart. And it has."

According to Nicholson, that's when he started to change. He worked as a ranch hand in Wyoming and said it made him more conservative.

"And then I came on back," Nicholson said. "I got married. I joined the Marine Corp. I fought in Iraq in '07, I fought in Afghanistan in '08-'09. I had kids along the way. Every bit of this made me more conservative."

After the Marines, he went to work as a business consultant. Nicholson, who now lives in Delafield, said that made him more conservative, too.

But it's not just Nicholson's personal story that's put him in this position.

Eleanor Powell, University of Wisconsin-Madison political science associate professor, said that if it weren't for the help of one particular GOP donor, Nicholson might still be a political unknown.

"He would need to have done something to get his name out there," Powell said. "There are other tactics. You can try to say outlandish things. You can try to get your name in the paper. You know, candidates do all those sorts of things to try to get the attention. But in his case, the money is helping a lot with that name recognition."

The bulk of that money is coming from Illinois businessman Richard Uihlein, who is one of the nation's top GOP donors this election cycle, according to the non-profit, nonpartisan research group the Center for Responsive Politics.

Uihlein spent $3.5 million on a super PAC supporting Nicholson by July 2017, before Nicholson had even officially launched his Senate bid. Uihlein was the group's only donor.

The list goes on. According to the Center for Responsive Politics, Uihlein gave $4.725 million to Restoration PAC, whose pro-Nicholson ads have struck similar notes. He gave $4.15 million to Americas PAC, which has spent heavily on behalf of Nicholson and against Democratic U.S. Sen. Tammy Baldwin.

Even when other big names have supported Nicholson, Uihlein has been close by.

Likewise, Nicholson was endorsed by a super PAC with ties to former Trump adviser Steve Bannon. It received $100,000 from Uihlein, too.

This spending hasn't gone unanswered. The pro-Vukmir Wisconsin Next PAC has also spent millions in the race, much of it on an ad attacking Nicholson's past as a Democrat. Its biggest individual donor is Beloit billionaire Diane Hendricks.

But her spending this election cycle has been dwarfed by Uihlein's, at least so far.

Nicholson downplays Uihlein's role in the campaign. He said he didn't promise Uihlein anything he wouldn't pledge to other voters.

"We were introduced by mutual friends, and we're friends," Nicholson said of Uihlein. "We believe that the country has a lot of challenges. And that it takes people from outside the political class to deal with it. And that's all."

Nicholson said the threats posed by a growing national debt endanger the nation's security, and it's important that people like him get into politics to deal with it.

He said the Marines gave him his "no excuses" leadership skills and prepared him for all of this. but the self-described political outsider didn't get into this fight alone.