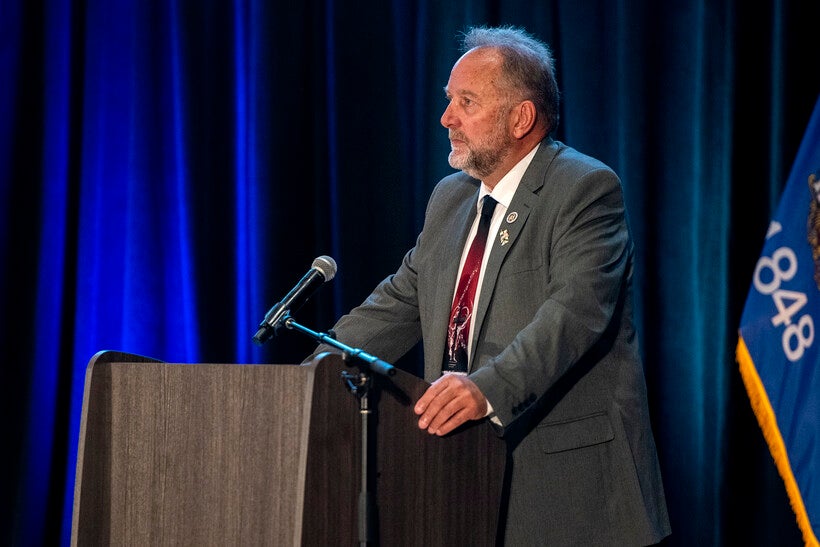 Ramthun, a GOP state representative, ran for governor after his legally impossible push for decertifying the 2020 election went nowhere in the Legislature
By Shawn Johnson
Share:

Less than a month before the Republican primary for governor, several poster boards stood on easels next to a lectern in the Wisconsin Assembly's ornate parlor. They were there for a press conference being held by Tim Ramthun, the Republican candidate for governor. But they were anything but typical for someone running a political campaign.

On one was a map showing which county Republican parties have called for a "Full Forensic Physical and Cyber Audit" of the 2020 election. Another showed which counties use different types of voting machines.

Still another was a list of figures describing Wisconsin's electronic voter database. At the bottom were post-it notes covered with numbers handwritten in black marker.

"The whole thing's a cloud," said Ramthun, the GOP state representative who made a name for himself by calling on the Legislature to overturn President Joe Biden's victory in Wisconsin. "In a way, we don't know exactly the true outcome of the election. So how can you certify something that is unknown?"

Speaking days after the Wisconsin Supreme Court ruled absentee ballot drop boxes are not allowed under state law, Ramthun said he would reintroduce his resolution calling on the Legislature to decertify President Joe Biden's victory in the 2020 presidential election. Election law experts from around the country — including the Legislature's own nonpartisan attorneys — have said that's impossible.

Ramthun has remained undeterred. He speaks with an understated, sometimes monotone delivery at events like these, reciting dates from memory and making frequent references to his 71-page PowerPoint on the election, which he expects his audiences to have read.

Ramthun's official bio touts experience with project management, not exactly the stuff of revolutionaries. But what he's proposing would be an extreme step for American democracy, and there were moments during this press conference when his voice rose.

"I am not a conspiracy theorist. I am not. How can you ignore this when you're supposed to be serving the public, and not try to do something about it?" Ramthun said, thumping his fingers on the lectern.

"Amen," answered some of Ramthun's supporters.

Ramthun is, by every traditional measure, a longshot candidate for statewide office. The top Republicans running for governor — former Lt. Gov. Rebecca Kleefisch and construction executive Tim Michels — have waged campaigns funded with millions of dollars and staffed by teams of seasoned political professionals. Ramthun raised about $170,000 through the end of June, and in the last public poll of GOP voters, he was basically an afterthought.

Even Ramthun's colleagues in the Republican-dominated Wisconsin Legislature have given him the cold shoulder. When he introduced his first decertification resolution, not a single legislator signed on as a cosponsor.

But nearly two years after the presidential election that former President Donald Trump won't stop talking about, Ramthun's message is hard to ignore. He's been effusively praised by Trump; he commands an audience with a vocal segment of the GOP base; and polling suggests his distrust of the 2020 election is widely shared among Republicans.

"I think it's terrible for our democracy," said election law expert Rick Hasen, a professor of law and director of the Safeguarding Democracy Project at UCLA.

"Not only does it undermine the legitimacy of the election process and the results of the 2020 election," Hasen said, "it also provides the groundwork for potentially manipulating election outcomes in 2024." 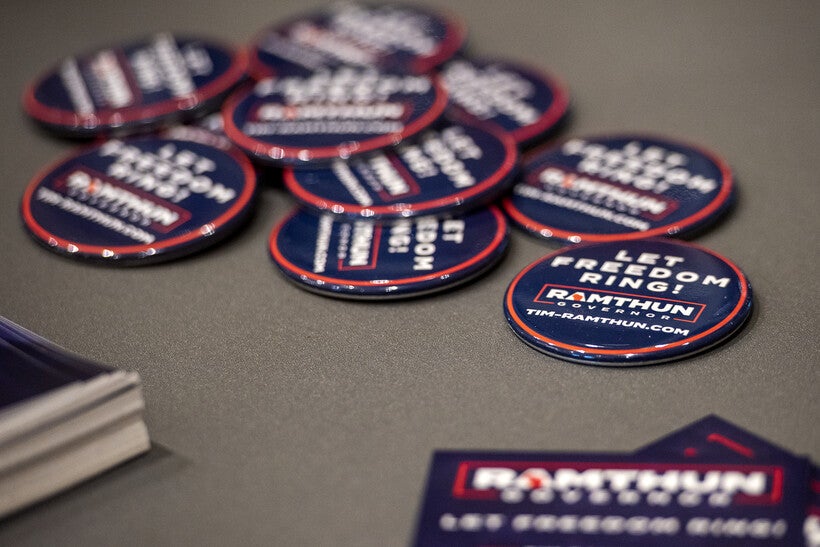 Buttons for Tim Ramthun are placed on a table outside of a debate for republican governor candidates Monday, June 27, 2022, at Providence Academy in Green Bay, Wis. Angela Major/WPR

A few years ago, it might have been hard to imagine a candidate like Ramthun running for governor. To hear him describe it, it's not something he considered either.

Ramthun, who represents a district that includes parts of Washington, Fond du Lac, Sheboygan and Calumet counties, was elected to the state Assembly in 2018. According to an analysis by Marquette University, his district has the strongest GOP lean of any in the state Assembly, giving Republicans a built-in 46-point advantage.

While he's hardly the only election skeptic in the Legislature, Ramthun started to get noticed in 2021 because of how far he was willing to take it, and who he was willing to blame for the way 2020 worked out.

Ramthun gained national attention in November when he sponsored his resolution calling for the Legislature to decertify the 2020 presidential election. No Republicans signed on to Ramthun's resolution, and it never received a vote.

After a Waukesha County Circuit Court Judge issued the first ruling striking down drop boxes, Ramthun took issue with Assembly Speaker Robin Vos, R-Rochester, the powerful Republican who had helped guide a conservative agenda in Wisconsin for the better part of a decade. An attorney for Vos had endorsed the use of absentee ballot drop boxes in the run-up to the 2020 election.

In a series of press releases titled "Let There Be Light," Ramthun also blamed the National Conference of State Legislatures for supporting drop boxes, noting that Vos was past-president of the bipartisan organization.

After Vos said Ramthun claimed Vos was working with an attorney for Hillary Clinton, he punished Ramthun, removing his full-time staff member who had helped Ramthun produce a series of videos questioning the 2020 election.

The move quickly gave Ramthun political martyr status among those inclined to believe his pitch, and in February, he formally launched his campaign for governor. Endorsing him at a rally to kick off his candidacy were other election deniers, from former national security advisor Michael Flynn to Mike Lindell, the MyPillow CEO.

"I'll just put it right out there," Lindell shouted to a packed crowd at a high school auditorium in Kewaskum. "I'm endorsing. He will be the best governor your state ever had in history."

Among the circuit of people for whom the 2020 election fight never really stopped, Ramthun is their guy.

At the press conference where he reintroduced his decertification resolution, Ramthun backer Sanna Huebschmann of Chilton was in the crowd, wearing a Ramthun t-shirt. She said she likes Ramthun because he works for people like her.

"That's the crux of why I'm behind him," Huebschmann said. "I know he's not given a lot of money. I know he has to work against his own party for me. And if someone's going to do that for me, then I'm going to be there for them."

"God bless Tim Michels and God bless Rebecca Kleefisch for running, because the more the merrier," Davis said. "But you better get on board, because you're going to be run over by a steam train if you don't get this."

Trump offers praise but no endorsement

There was some speculation that Trump himself might endorse Ramthun's campaign for governor. After all, Trump had praised Ramthun for offering his resolution, and Ramthun told Rolling Stone that the former president had offered to support him.

But months passed and a new candidate, Michels, got into the race for governor. Not long after, Trump endorsed Michels, who spent millions of his own money on TV ads and shot up in the polls.

"Tim Ramthun may be saying the things that Trump wants to hear," said University of Wisconsin-La Crosse political scientist Anthony Chergosky. "But if you have no chance of winning, from Donald Trump's point of view, you're just going to harm his win-and-loss record."

Trump's endorsement likely would have at least boosted Ramthun's chances, but without it, polling suggests his campaign has struggled. A June survey by Marquette University Law School found just 3 percent of GOP voters supported Ramthun.

Even at the state GOP convention, where a sizable number of delegates supported a nonbinding resolution calling for decertification, Ramthun received just 2.6 percent of the vote.

Chergosky said he doubts Ramthun will get many votes in the GOP primary — but his presence in the race puts pressure on Michels and Kleefisch to be more extreme on the issue of the 2020 election.

"Pre-Trump, it would just be unimaginable for someone like Tim Ramthun to be a candidate for governor and get any attention," Chergosky said. "But in the Trump era, Tim Ramthun actually is able to have a platform."

Neither Michels nor Kleefisch go quite as far as Ramthun in the way they describe the 2020 election, but they've certainly cast doubt on its outcome. Perhaps more notably, neither candidate will commit to certifying the 2024 presidential election, a job that falls to Wisconsin's governor.

Hasen, the UCLA election law expert, said optimistically, the rhetoric from Ramthun and other candidates is just cheap talk, a way to placate Trump and the GOP base.

"Less optimistically, I think that there's a movement to try to not only make voting harder, which is something that we've seen in the last few decades on the Republican side, but also to potentially provide a pathway to overturning election results," Hasen said.

Ramthun's efforts in the Wisconsin Legislature are still going nowhere. After he reintroduced his decertification resolution, he had hoped it would generate more support among his colleagues. Instead, Ramthun said just two legislators — state Reps. Janel Brandtjen, R-Menomonee Falls, and Chuck Wichgers, R-Muskego — signed on.

But the idea won't seem to die. Trump, who remains focused on Wisconsin, reportedly called Vos after the Supreme Court's drop box decision, demanding to know why Vos wouldn't act on decertification. After Vos told Trump such a move would be unconstitutional, the former president cut loose, giving an indirect boost to Vos' own Republican primary opponent, Adam Steen.

"I don't know his opponent in the upcoming Primary, but feel certain he will do well if Speaker Vos doesn't move with gusto," Trump said in a written statement. "Robin, don't let the voters of Wisconsin down!"

The threat was another reminder from Trump, whose influence still dominates Republican politics: He may not endorse someone like Ramthun, but he wholeheartedly backs Ramthun's ideas.

"This risk of election subversion is what I think is most worrisome," Hasen said. "Just having this discussion in a gubernatorial race, as you have in Wisconsin, I think, elevates the claims."