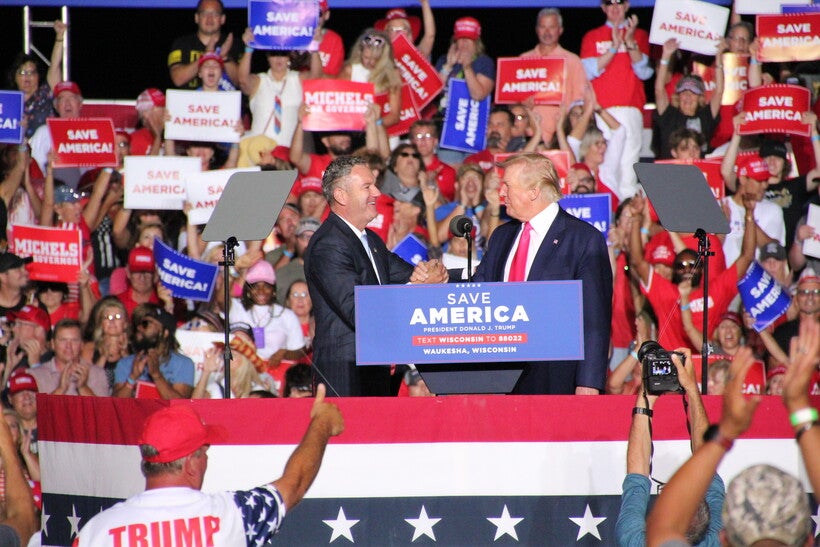 Trump also suggested Assembly Speaker Robin Vos, R-Rochester, — who has helped set the GOP agenda in Wisconsin for a decade — is a Democrat, urging people to vote for his primary opponent, Adam Steen. At one point in between, he even took a dig at Kleefisch's husband.

It was the latest reminder that Trump remains fixated on politics in Wisconsin at all levels as he prepares for an all-but-certain run for president again in 2024. Trump formally endorsed Michels in early June, but Friday was the first time the two had shared a stage together at a political event.

"You have to understand who Tim is. This guy's big time," Trump said.

Trump said that when Michels met with him to ask for his endorsement, the two spent most of their time talking about Michels Corporation, his family construction business.

Trump said he and Michels were introduced by Diane Hendrix, the billionaire GOP donor who was one of former Gov. Scott Walker's biggest supporters. Walker backs Kleefisch, his former lieutenant governor, in the GOP primary.

"She's the handpicked candidate of the failed establishment, the RINOs and the Washington swamp," Trump said, referring to the acronym for Republicans In Name Only. "Kleefisch complains about lobbyists, but her husband is one of the biggest lobbyists in a place called Madison," Trump said, referring to Joel Kleefisch, the former state representative-turned-lobbyist who currently represents nine clients, according to state records.

"Adam Steen is running to defeat your RINO speaker of the house, Robin Vos," Trump said.

Trump said Vos, who passed several bills last session that would have made absentee voting more difficult, has blocked efforts to secure the election.

"He just blocks them," Trump said. "A lot of people think he's a Democrat."

Michels repeatedly praised former Supreme Court Justice Michael Gableman, who Vos hired to lead a Republican investigation of the 2020 election. Gableman remains on the state payroll under a contract he signed with Vos.

"And you know, Michael is endorsing Steen," Trump said.

Gableman spoke at the event but only to deliver the prayer, where he did not mention either Vos or Steen by name. 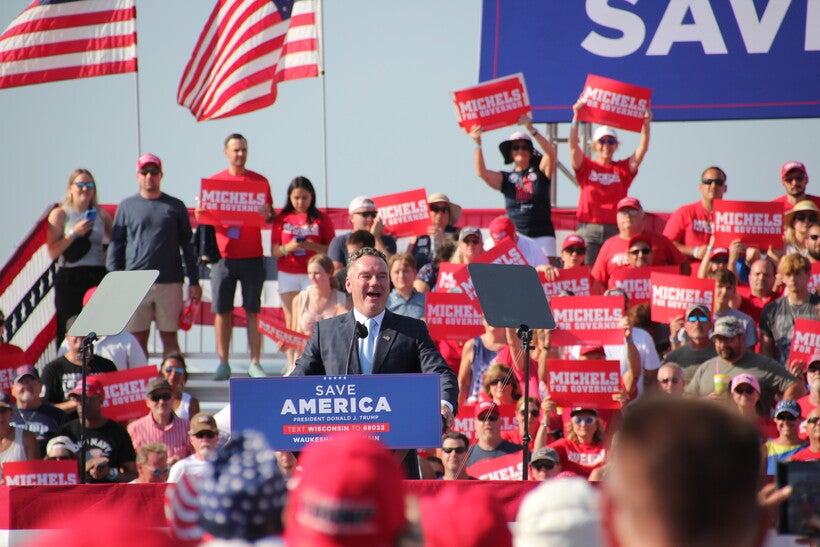 Michels spoke twice Friday, once briefly while Trump was on stage and also hours earlier before the former president arrived in Wisconsin.

During his earlier remarks, Michels drew parallels between himself and Trump, saying Trump endorsed him because they're both builders, businessmen and "outsiders."

"It's been too long since President Trump has been out of office," Michels said. "I wish he was president today. Joe Biden and (Democratic Gov.) Tony Evers are two peas in a pod. Both career politicians in way over their head."

Michels said he ran for governor because he and his wife were concerned about what's happening in America, making reference to critical race theory, or CRT — an academic legal framework to help identify the effects of structural racism on policy — and Black Lives Matter among other causes.

Michels, who opposes gay marriage, also suggested that the Democratic party had lost some voters because of its support for LGBTQ rights.

"I have guys coming up to me and they say, 'Tim, I work in the union, but you know what? The Democratic Party has left me. All they care about now is LGBTQ and drag queens shows for third graders,'" Michels said.

In addition to Trump, Michels touted his endorsement from former Republican Gov. Tommy Thompson, the longest serving governor in Wisconsin history who also served for two decades in the state Legislature.

Less than a minute later, Michels said people had embraced his campaign because they were tired of career politicians.

"That's the way our Founding Fathers intended it to be," Michels said. "Back in the day — butcher, baker, candlestick maker — take your real-life experience, go to the Legislature, serve for a couple of terms and then go back and let somebody else do it."

"Her husband's a lobbyist," Michels said. "We need to get those people out of government. We need to bring some purity back into government."

In a written statement, the Kleefisch campaign criticized Michels for the comments, and for allegedly showing Trump a photo of Kleefisch's teenage daughter going to homecoming with the son of state Supreme Court Justice Brian Hagedorn, one of Trump's favorite targets. The Milwaukee Journal-Sentinel reported last month that the photo was a factor in Trump endorsing Michels over Kleefisch.

Michels has a home in Connecticut where he lives part-time with his family.

The winner of the Aug. 9 GOP primary will face Gov. Tony Evers in the November general election.

Evers' campaign said before the rally that Michels was rounding out his "radical" primary campaign by bringing in Trump, calling the former president "one of the most divisive politicians."

"Michels has embraced Trump’s election lies at every turn, saying he’s open to overturning election results and dismantling our bipartisan elections system," said Evers campaign spokesperson Sam Roecker. "Every candidate in the Republican primary is too extreme for our state." 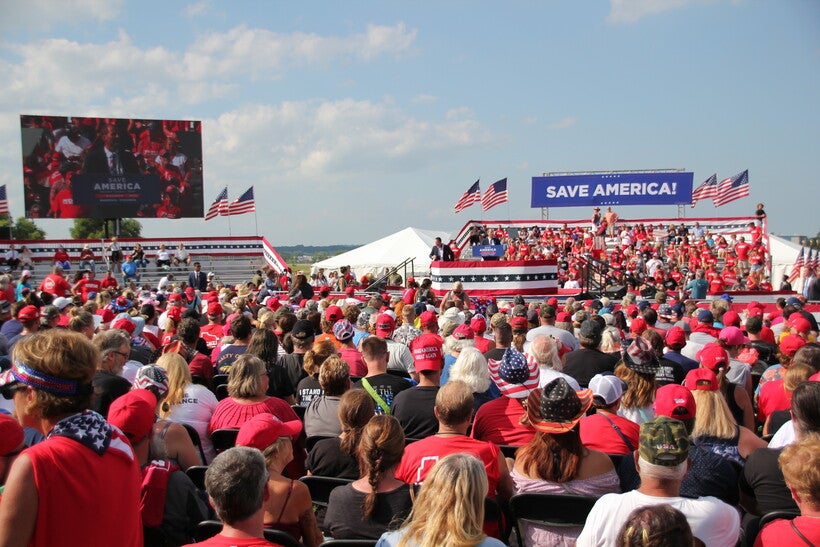 Michels did not criticize specific legislators, although he spoke shortly after Steen addressed the crowd in his own speech attacking Vos. Trump endorsed Steen Tuesday.

"There's only one man who is in charge of the wrong that's happening in Madison, and that is my opponent," Steen said.

Steen charged that Vos was standing in the way of "free and fair" elections.

"Some call him a RINO," said Steen. "Others a treasonous traitor … but no matter what you call him, it's time to do one thing on Aug. 9. It's time to toss Vos."

Others speaking Friday included Trump-backer Alex Bruesewitz, who said he was raised in Ripon. Ripon is often referred to as the birthplace of the Republican Party.

"But I'm sorry, I have to make an announcement. It's the birthplace of the old Republican Party. The new Republican Party was born in June of 2015 at Trump Tower in New York City," Brusewitz said, referring to the month Trump announced his bid for president.

"We must not go back to the days of old, feckless, cowardly Republicans like (former U.S. House Speaker) Paul Ryan and Robin Vos," Bruesewitz said. "Vote the RINOs the hell out of office."

Also speaking was Rep. Janel Brandtjen, another Republican who has sparred with Vos and recently supported a call for decertifying the 2020 election. While Brandtjen was also endorsed by Trump, she has no primary opponent and her district has a built-in 32-point GOP advantage according to a Marquette University analysis.

Trump's visit to Waukesha put him in the heart of one of the state's most Republican counties, though one where his margins of victory have trailed past Republicans. It's also a county where Democrats have made modest inroads in recent elections.

"It's never a great day in your county when Donald Trump comes, because you know he's going to bring his unique brand of radical MAGA extremism and divisive politics to your community," said Matt Mareno, chair of Waukesha County Democratic Party. "It's not something we're a fan of here in Waukesha."

Trump had been scheduled to return to Wisconsin on Aug. 20, but he canceled that visit after the Michels campaign rally was scheduled.