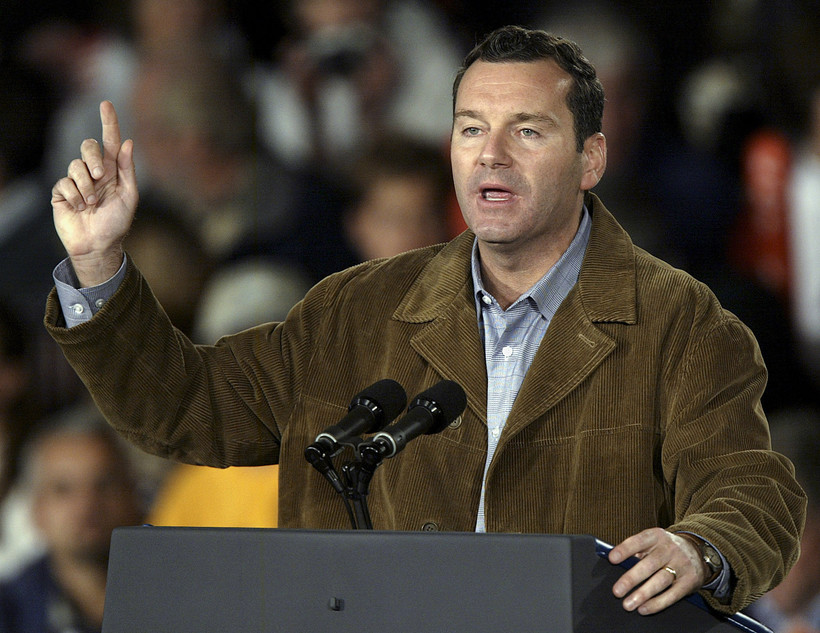 Wisconsin Republican Tim Michels speaks before an event Oct. 15, 2004, in Oshkosh, Wis. Business owner Tim Michels filed paperwork Friday April 22, 2022, to run in the Republican primary for Wisconsin governor, arriving late to a crowded field, but with the personal wealth to back a campaign. Morry Gash/AP Photo

An already contentious Republican primary for governor grew more crowded Monday as construction executive Tim Michels announced his candidacy for governor, kicking off his campaign with a major ad buy promising to "turn Madison upside down."

Kleefisch and Nicholson have already shown the ability to finance statewide campaigns, Kleefisch through a network of GOP donors and Nicholson with the help of Republican megadonor Richard Uihlein. Michels, who could potentially self-finance his race, told WISN-AM he would limit individual contributions to $500, well below the legal limit of $20,000.

"I'm not going to owe anyone anything," Michels said. "I don't give a rip about the lobbyists, expensive special interest, the PACs. I'm going to be an independent governor who's going to stand solely for the people of Wisconsin."

Michels and his brothers run Michels Construction, a major player in Wisconsin's road building lobby that he said also builds everything from subway tunnels to oil pipelines and electrical transmission lines. Michels said the company employs more than 8,000 people.

He lives in Hartland and was born in Brownsville, where his family's business is located.

He enters the race just a week after former Republican Gov. Tommy Thompson announced he would not run for governor. Thompson, a longtime political ally of the road builders, told WISN-TV that Michels told him he wouldn't run against Thompson.

While Michels has painted himself as an outsider to politics, he's politically connected. As of Monday, Michels was still listed as a board member for The 1848 Project, a conservative advocacy group founded by Kleefisch in 2020 as she prepared to run for governor. Kleefisch has since left the group.

As recently as 2019, Michels also served as a board member for Wisconsin Manufacturers and Commerce, according to tax documents published by ProPublica. WMC endorsed Kleefisch in January.

University of Wisconsin-La Crosse political science professor Tim Dale said Michels' candidacy was another sign the Republican Party was less unified than it has been in the past, and less unified than Kleefisch — who served as lieutenant governor under former Republican Gov. Scott Walker — would have hoped.

"I do think that the nature of the Republican Party right now — the coalition — tends to be fairly dissatisfied with government as it is," Dale said. "So I think Kleefisch does represent, for better or for worse, that insider view, having served in the Walker administration. And while it's certainly a strength in terms of name recognition and experience, I think for a certain portion of Republican voters, that's not a strength."

Dale said Michels would try to capture those voters but said it would be challenging with the state's primary less than four months away.

"I think it's still her race to lose, even though we see now what could be considered a bigger name throwing his hat into the ring," Dale said.

Michels could face his own set of hurdles given his company's prominent role in the road-building industry, which has long been criticized by a segment of conservatives for its reliance on government funds. Michels also employs union labor, which could be noteworthy in a state where Walker made a national name for himself by restricting union rights.

Asked about those connections Monday, Michels said he believed his company had saved taxpayers money by submitting bids that reduced costs compared to other road builders. He also defended his use of union labor.

"In some cases, we need thousands of people that are skilled labor," Michels said. "So when we go to Nebraska or California or New York, where do you find hundreds or even thousands of workers on day one? We go to the union hall."

Precisely how Michels plans to differentiate himself from the rest of the GOP primary field also remains unclear. He described himself as pro-life, pro-gun, pro-capitalism and anti-tax, never directly criticizing his GOP rivals.

"I have great respect for Kevin and for Becky and for Tim," Michels said. "I don't think people find much difference in our issues."

The winner of the GOP primary will face Democratic Gov. Tony Evers in November. Nicholson voiced support for several GOP bills that were recently vetoed by Evers, including a plan that would ban private election grants, a bill that would lift income limits on the state's private school voucher program and another proposal that would create a so-called "parental bill of rights."

The state Democratic Party issued a statement calling Michels a failed candidate who held radical views outside of the mainstream.

"This Republican primary field for governor is a case of quantity over quality," read the statement from Democratic Party of Wisconsin Chair Ben Wikler. "Tim Michels is the fourth candidate to enter this mess of a nomination fight — and the Republicans still don’t have a single candidate who isn’t too divisive for Wisconsin."