Rep. Timothy Ramthun has been praised by former President Donald Trump for his efforts to overturn President Joe Biden's victory in Wisconsin
By Shawn Johnson
Share:

A Republican state representative who made a name for himself by trying to decertify the results of Wisconsin's 2020 presidential election has filed paperwork to run for governor.

His candidacy might have been unheard of just a few months, or even weeks, ago, but Ramthun's outspoken push to overturn President Joe Biden's victory in Wisconsin has given him folk-hero status among some in the Republican base. It's also brought him praise from former President Donald Trump.

While it's still unclear how Ramthun's candidacy will affect the GOP primary, it could put pressure on the leading Republican candidates to continue to undermine Wisconsin's election. Former Lt. Gov. Rebecca Kleefisch launched her campaign for governor in September, and former U.S. candidate Kevin Nicholson announced his candidacy last month.

In addition to Ramthun, Kleefisch and Nicholson, Franklin businessman Jonathan Wichmann has filed to run for the GOP nomination for governor. Madison businessman Eric Hovde, one of the Republicans who ran for U.S. Senate in 2012, has also been considering the race.

Ramthun gained national attention in November when he sponsored a resolution calling for the Legislature to decertify Biden's victory in Wisconsin, citing widely discredited reports of fraud. Trump issued a statement praising the move, calling the resolution "powerful and very popular" and encouraging the Wisconsin Legislature to pass it.

He was stripped of his only staff member at the state Capitol by Assembly Speaker Robin Vos, R-Rochester, after Ramthun repeatedly blamed Vos for not doing more to overturn Biden's victory.

More recently, Ramthun attempted to force a vote on his resolution to decertify Biden's victory in Wisconsin. His proposal, which had no co-sponsors, was referred to a committee run by legislative leaders, where Assembly Republican Majority Leader Jim Steineke, R-Kaukauna, vowed it would not pass.

While Vos' decision to punish Ramthun was widely supported by their GOP colleagues in the Legislature, it's turned Ramthun into something of a political martyr in some Republican circles. GOP activists outside of state government have criticized Vos, with local Republican Party leaders in Iowa and Wood counties calling on the powerful speaker to be ousted from his leadership position and calling for Ramthun's legislative staff to be restored.

Vos also took heat from the Republican base when he encouraged Nicholson to stay out of the race for governor, saying his candidacy could only serve to hurt Kleefisch, the Republican frontrunner. 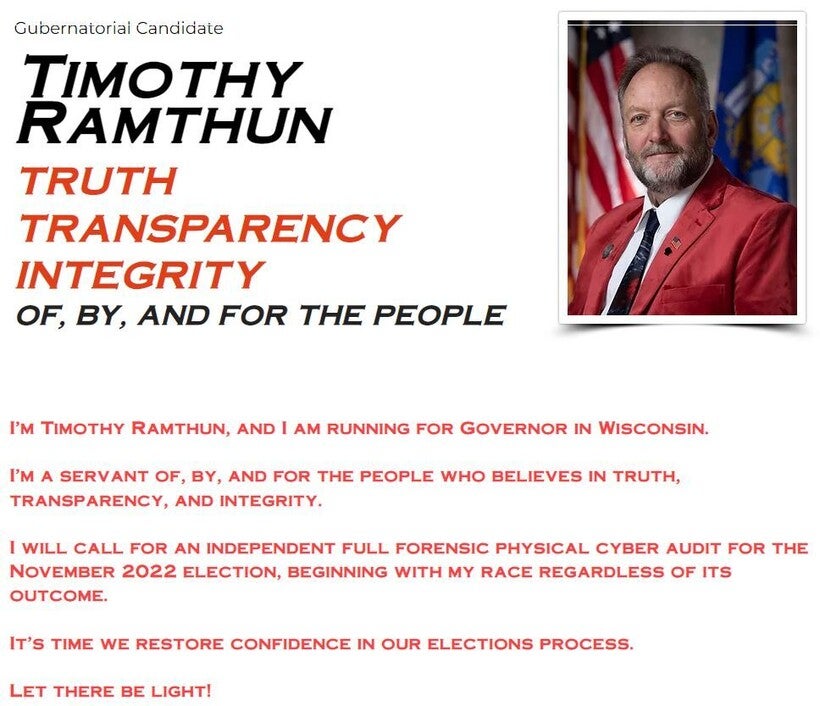 A screenshot of a part of Timothy Ramthun's campaign website before it was taken down Wednesday night. Shawn Johnson/WPR

A "Ramthun for Governor" website that was online briefly Wednesday gave every indication that the two-term state lawmaker would use his push to overturn the election as his campaign platform.

"I'm Timothy Ramthun, and I am running for Governor in Wisconsin," announced the website in block lettering. "It's time we restore confidence in our elections process. Let there be light!"

Campaign literature on the Ranthum site touted the endorsement of My Pillow CEO Mike Lindell, which Lindell confirmed in an interview with the Milwaukee Journal Sentinel. Lindell has been among the most outspoken election conspiracists since Trump lost in 2020.

Ramthun's website also pledged that he would call for an "independent full forensic physical cyber audit for the November 2022 election," regardless of its outcome.

Ramthun's possible entry into the governor's race was first reported by Rolling Stone in a story titled, "Wisconsin Is Ground Zero for the MAGA Effort to Steal the Next Election." He told the magazine that Trump had called Ramthun personally to thank him for his continued efforts to overturn the election.

When asked by the magazine if he felt alone in his push to overturn the election, Ramthum reportedly said the opposite was true.

"I’ve got the Lord with me. I’m surrounded by friends. And I’ll tell you," he told Rolling Stone, "I’ve got the entire state behind me."

The 2020 election has already been heavily scrutinized in Wisconsin, where Biden defeated Trump by 20,682 votes. Biden's victory was affirmed by a partial recount as well as multiple state and federal court decisions, and a review by the nonpartisan Legislative Audit Bureau found no evidence of widespread fraud.