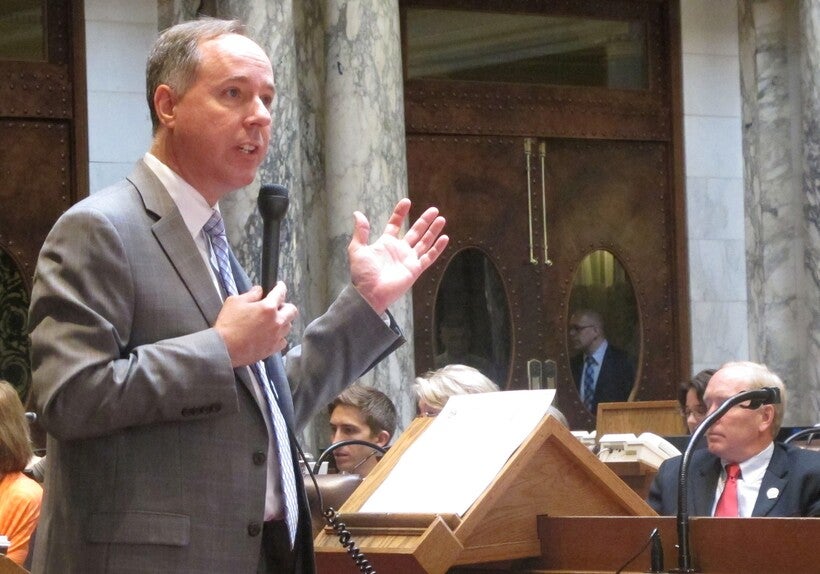 In this June 19, 2013 photo, Republican Assembly Speaker Robin Vos speaks in defense of the state budget during debate in Madison. Scott Bauer/AP Photo

Republican Assembly Speaker Robin Vos has stripped a GOP lawmaker of his lone staff member after the lawmaker repeatedly blamed Vos for not doing more to overturn the results of Wisconsin’s 2020 presidential election.

The move by Vos, R-Rochester, to punish Rep. Timothy Ramthun, R-Campbellsport, was first reported Thursday morning by WisPolitics.com. Several hours later, the rest of the Assembly GOP leadership team and all Assembly Republican members of the Legislature’s budget committee issued a written statement supporting the decision.

Ramthun gained national attention in November when he sponsored a resolution calling for the Legislature to decertify President Joe Biden’s victory in Wisconsin, citing widely discredited reports of fraud. Former President Donald Trump issued a statement praising the move, calling the resolution "powerful and very popular" and encouraging the Wisconsin Legislature to pass it.

Vos has been critical of the way the 2020 election was run, approving what has turned into a sweeping investigation by former Wisconsin Supreme Court Justice Michael Gableman. But Vos has rejected calls to decertify the 2020 race, a move the Legislature’s nonpartisan attorneys have said is legally impossible.

In recent weeks, Ramthun has issued a series of press releases under the heading "Let There Be Light" from his state Capitol office. On Jan. 14, the day after a Waukesha County judge ruled drop boxes are not allowed under state law, Ramthun accused Vos of acting illegally when his attorney endorsed the use of drop boxes in the 2020 election.

Ramthun’s press release also criticized Vos’ role at the National Conference of State Legislatures, where the speaker is a past president, suggesting the conference's support of drop boxes had led to their use in Wisconsin. According to WisPolitics, Vos said Ramthun falsely accused Republicans of signing a deal with Hillary Clinton's lawyers to authorize drop boxes.

Vos, who is the longest-serving speaker in the history of the Wisconsin Assembly, has faced criticism before from the GOP base. At the 2021 State GOP Convention, some Republican activists circulated a petition calling for his removal as speaker, but the measure never received a vote.

At a press conference Thursday in Madison, Vos was asked about facing criticism from some Republicans for removing Ramthun’s staffer.

"I think I'm in pretty good shape," Vos said. "I think most people appreciate what we're doing, and that we need to focus on the future, not on trying to decertify the election and focus on the past."

Ramthun did not return a message left at his state Capitol office seeking comment.

Still, Vos’ move hardly put an end to false claims among some Wisconsin Republicans that the 2020 election was stolen. Gableman’s investigation showed no sign of letting up, having been formally endorsed again this week by the Assembly Committee on Campaigns and Elections.

"And what action awaits Gableman for similar behavior?" said Gov. Tony Evers spokesperson Britt Cudaback in a tweet. "Just your perennial reminder that Vos could end that circus today just as he could have on any given day before now. He’s still choosing not to."

Biden defeated Trump by about 21,000 votes in Wisconsin, a victory that withstood a partial recount and multiple legal challenges in state and federal courts.