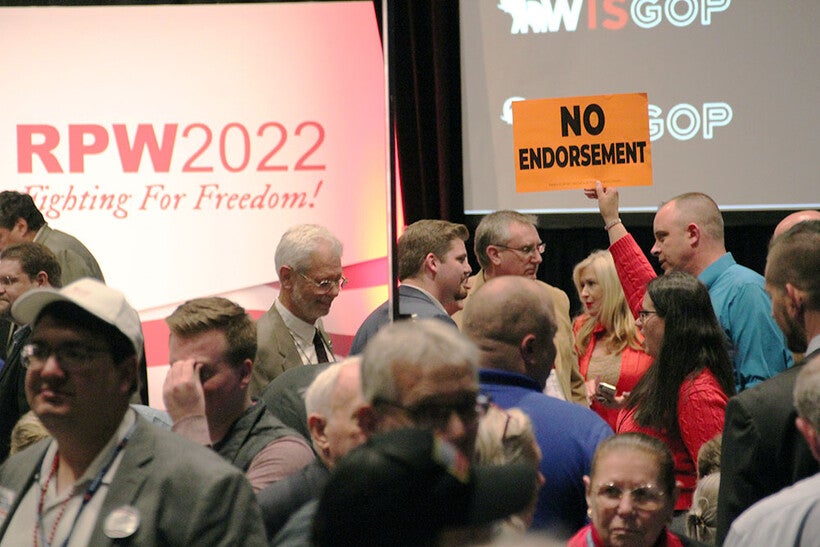 A woman holds up a "NO ENDORSEMENT" sign at the 2022 Wisconsin Republican Party Convention. Shawn Johnson/WPR

Republicans don't endorse any candidate in GOP primary for governor

At the state GOP convention, Republican Rebecca Kleefisch fell short of the 60 percent needed for an endorsement
By Shawn Johnson
Share:

Republican activists decided not to endorse any of the GOP candidates for governor Saturday, a vote that will keep the state party officially neutral until after Wisconsin's Aug. 9 primary.

It was a setback for former Republican Lt. Gov. Rebecca Kleefisch, the GOP frontrunner in the race for governor and the leading vote-getter among all the candidates in Saturday's balloting. Kleefisch received 54.6 percent of the votes from Republican delegates Saturday, falling shy of the 60 percent threshold needed to win the party's nod.

No other candidate came close in Saturday's voting. State Rep. Tim Ramthun received roughly 2.6 percent of the vote. Republicans Kevin Nicholson and Tim Michels came in third and fourth in an earlier round of voting, eliminating them from the final ballot.

But GOP activists successfully pushed to add the option of "no endorsement" to the process. On the final ballot, 42.8 percent of Republicans chose the "no endorsement" option, which was enough to block Kleefisch's path to a clear victory.

Speaking to reporters after the vote, Kleefisch said she felt "terrific" about the outcome, rejecting the suggestion that Saturday's vote was a setback.

"I wouldn't say that at all," Kleefisch said. "In fact, I'm declaring victory."

Kleefisch also rejected the idea that there's no clear frontrunner in the GOP primary for governor without the party's endorsement.

"Did you see the numbers? There's a clear frontrunner," Kleefisch said to reporters.

But Saturday's vote was more than just a popularity contest for Republicans. An endorsement would have allowed the state Republican Party, which can accept unlimited donations, to actively campaign for Kleefisch during the primary cycle. That could be significant in a race where Michels can lean on his personal wealth to fund his campaign and Nicholson has the backing of GOP megadonor Richard Uihlein.

"There is no doubt that Rebecca Kleefisch wanted this incredibly badly. She lost it," Nicholson told reporters after the vote.

Nicholson scoffed when asked whether he should get out of the race because of his poor showing Saturday.

"I very clearly told everybody to vote for 'no endorsement,'" Nicholson said. "'No endorsement' carried the day. We won."

Michels, who launched his campaign for governor less than a month ago, all but conceded in his speech before the vote that he would not contend for the endorsement.

"I'm realistic about today's vote," Michels told Republicans. "I'm here to ask for your vote on Aug. 9 and again in November."

Ramthun, the Campbellsport Republican who made a name for himself calling for the decertification of the 2020 election, received a loud cheer from delegates who voted for him over Nicholson or Michels.

Ramthun said he would audit his own election and primary victories should he win the governor's race, saying elections "need to be objective."

Republican Adam Fischer, who is also running for governor, was eliminated in the first round of balloting with Nicholson and Michels.

GOP delegates debated the "no endorsement" option Saturday morning ahead of the vote, with some Republicans arguing the party should remain in the endorsement business.

"Our main purpose is to identify those candidates that are the most viable, and give our opinions to the electorate so that they can make informed choices," said Paul Wharton, a Republican from Washburn County. "We're not taking away their vote, we're just helping them pick the right candidate."

But a majority of delegates favored the "no endorsement" option, arguing that picking a Republican candidate ahead of the August primary favored party insiders over the public.

"We only represent a very small portion of our state," said Chippewa County Republican Party Chair Amanda Radle. "And taking that right away from the people that go out and vote is not correct."

In 2010, the party's endorsement proved pivotal in the Republican primary contest for U.S. Senate. Several Republicans were running for Senate headed into that convention, but after U.S. Sen. Ron Johnson won the endorsement, it effectively cleared the field.

That same convention saw the party overwhelmingly nominate former Gov. Scott Walker as its nominee over former Republican Congressman Mark Neumann. Walker, who spoke Saturday, reminded delegates of those votes in 2010 and urged them to support Kleefisch this year.

"Rebecca Kleefisch is the only person speaking here today other than me or Ron Johnson who's actually won a statewide election," Walker said.

Other Republicans have tried to tie Kleefisch to the state GOP's more recent string of defeats, which include Walker's loss to Democratic Gov. Tony Evers in 2018 and former President Donald Trump's loss to President Joe Biden in 2020.

"We have lost 11 of 12 statewide elections, and we cannot continue down this path," Nicholson told delegates.

Democrats issued a written statement saying the endorsement vote was an example of "conservatives in chaos."

"Given the knives-out, unholy shambles of a GOP primary that we’ve seen so far, it is not a surprise that the Republican Party could not unite around a candidate," said Democratic Party of Wisconsin Chair Ben Wikler. "The vicious personal attacks between their candidates will continue to tear the GOP further apart."

Republicans also voted against endorsing candidates in other competitive primaries for lieutenant governor, attorney general and secretary of state.

While the race for governor took the spotlight Saturday, delegates also heard from Republican U.S. Sen. Ron Johnson, who said in his speech that he's running against the media in his bid for a third term in office. Republican activists hold up signs encouraging no endorsement of a GOP candidate for governor Saturday during the Wisconsin Republican Party Convention at the Madison Marriott West in Middleton. Shawn Johnson/WPR

Vos has taken heat from a vocal segment of the GOP base for consistently rejecting the idea that the Legislature could take a vote that would undo the results of the 2020 election. The Legislature's nonpartisan attorneys and other election law experts have said such an option would be legally impossible.

Vos told GOP delegates that the 2020 election revealed issues that need to be fixed in Wisconsin's system of elections, telling party activists that they were united in that belief.

"But I am going to say something that, I'm sorry, many of you might not want to hear, but we have no ability to decertify the election and go back and nullify it," Vos said to a loud chorus of boos.

After state Republican Party Chairman Paul Farrow interjected to call on activists to be respectful, Vos said the best thing about coming to a state convention was getting to hear different viewpoints.

"The Republican Party has to stand for freedom of speech, and the right to disagree. We are not the cancel culture," Vos said.

Speaking to reporters after his speech, Vos was asked whether he'd ever been booed so loudly outside of the massive protests that took place at the state Capitol in the 2011 debate over Act 10.

Later Saturday, delegates voted on a resolution calling for Vos' resignation as speaker. It failed with roughly 36 percent of the vote. An effort to remove Vos as speaker during last year's convention also failed.

Vos told Republicans that they had a chance at winning a veto-proof two-thirds supermajority in the Legislature that would make Evers "irrelevant," but that defeating Evers should be their top goal.

Vos said he had spoken to Evers only once in more than a year-and-a-half, and that was to shake his hand at the governor's 2022 State of the State Address.

Sharing the stage with Vos Saturday, state Senate Majority Leader Devin LeMahieu, R-Oostburg said Evers had called him three or four times, including when his father recently passed away. While he chided the governor for not working with the Legislature and for taking credit for Republican ideas, LeMahieu conceded that some voters like Evers.

"I think for me, the scariest thing going into this election cycle with Tony Evers is that he is sort of a nice guy and a decent guy," LeMahieu said.