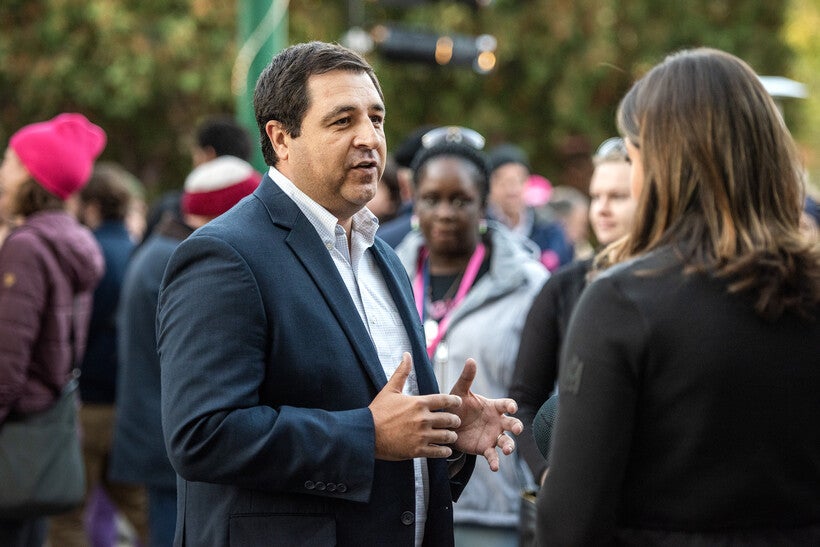 Kaul has emphasized the push for abortion rights in his campaign for a second term
By Sarah Lehr
Share:

At a Planned Parenthood rally in Middleton exactly one month before Election Day, the theme of the evening was taking control.

And the 41-year-old Democrat drew boos from the crowd when he described how legislators blocked a plan by Democratic Gov. Tony Evers to amend the constitution, so voters could eventually repeal the law by a statewide referendum.

But Kaul, who’s running for another four-year-term, said Wisconsinites can still exercise choice on Nov. 8.

"Reproductive freedom is on the ballot one month from today," Kaul said. "We're not without options because we are as close to having a referendum as we are going to have in Wisconsin." 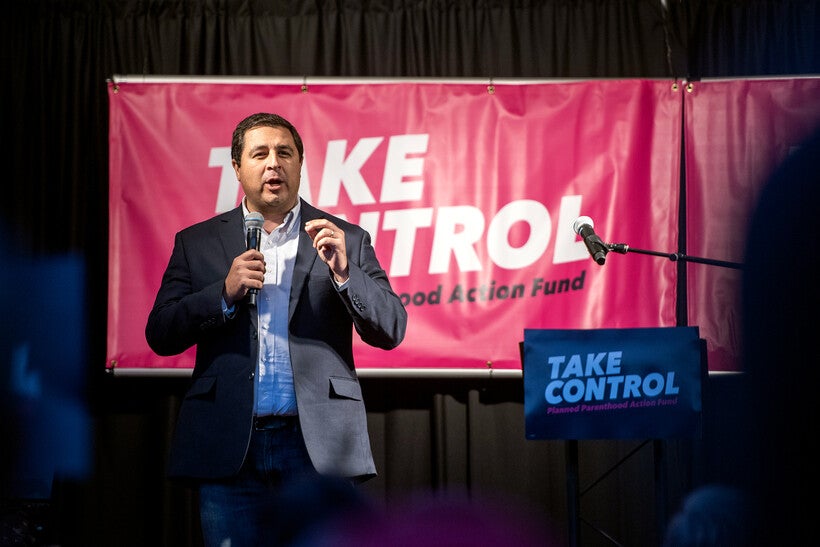 The attorney general’s race is commanding less attention than this year’s battle in Wisconsin for governor and the U.S. Senate. But, as Kaul reminded supporters, the AG wields key powers in a state beset by political division over issues ranging from gun control to protecting democracy to the overturning of Roe v. Wade.

In particular, Kaul has been hammering the abortion issue as he fends off a challenge from Fond du Lac County District Attorney Eric Toney, a Republican who paints himself as tough on crime.

Toney has said he would enforce the 173-year-old state law that makes providing an abortion a felony unless it’s done to save a pregnant woman’s life. Kaul has pledged not to prosecute medical professionals under the law, and he's suing in an attempt to block its enforcement.

The suit is ongoing and, in the meantime, providers across Wisconsin have stopped performing elective abortions. But Planned Parenthood President Alexis McGill Johnson took an optimistic tone as she praised Kaul’s intervention.

"We need people who are willing to use their power … and make sure that they are fighting a ban that clearly none of us were ever around for," she said to cheers at the October rally in suburban Madison. "We weren't ever included in those decisions that they were making 173 years ago."

Kaul has backed Evers while clashing with the Legislature

Kaul, who’s the son of former Wisconsin Attorney General Peg Lautenschlager, won his first term as attorney general 2018, edging out Republican Incumbent Brad Schimel by less than a percentage point, or about 17,000, votes. He was previously an assistant U.S. Attorney in Baltimore before he moved back to Wisconsin to work in private practice with a focus on voting rights at the law firm Perkins Coie.

Kaul has been a reliable ally to Evers. Under Kaul's leadership, Wisconsin's DOJ has gone to court to defend Evers’ COVID-19 policies, including Wisconsin's stay-at-home orders and a mask mandate. And he joined the Democratic governor in challenging political district maps drawn by the Republican-led Legislature after the 2020 Census.

Like Evers, Kaul has also clashed with the Legislature’s Republican majority since even before his first day in office.

After Kaul and Evers were elected, lawmakers passed a series of lame-duck laws in late 2018 that limited the power of the incoming governor and attorney general, both of whom were about to take office to replace Republicans. That included a provision requiring the DOJ to get a legislative committee’s approval before settling civil cases. A Dane County judge sided with Kaul when she found the provision unconstitutional earlier this year, although she stayed her ruling while the case was appealed.

Kaul has also used the attorney general's office as a bully pulpit. He called on state lawmakers to pass stricter gun control measures following a 2020 mass shooting. And he joined Republicans to push for a new law aimed at preventing a future backlog of untested sexual assault kits — an idea that eventually passed with broad bipartisan support.

Kaul has also promoted the Wisconsin Department of Justice's work in securing a more than $400 million settlement with drug manufacturers over the opioid epidemic. And he said he’s shown he can be an environmental champion through actions like a lawsuit against 18 companies over PFAS contamination. 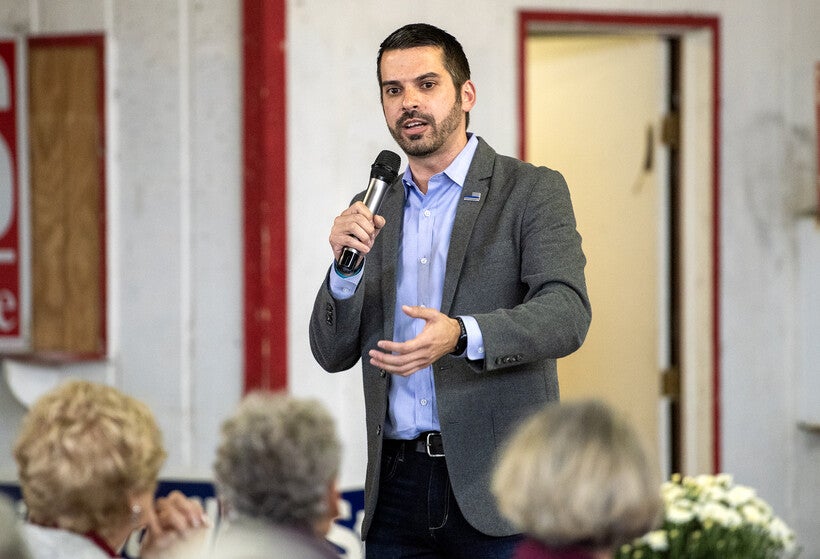 Toney, meanwhile, argues Kaul hasn't focused enough on the core mission of the Department of Justice, and says a leadership vacuum at the DOJ has fueled staffing vacancies and slowed the investigation and prosecution of crimes.

"We want to make sure that our law enforcement have the equipment and the resources and personnel that they need to keep Wisconsin safe," Toney said during a press conference on the sidewalk outside the DOJ’s downtown Madison office. "And that's where we have a problem with our attorney general. Because his actions have shown he's not deploying these resources. He's not prioritizing public safety."

At the start of October, 10 percent of 90 special agent positions in the agency’s Division of Criminal Investigation were vacant, and about 11 percent of prosecutor positions were vacant, according to figures provided by the DOJ.

During an interview with Wisconsin Public Radio, Kaul said the department typically hires people in waves, so recruits can be trained at the same time, and added that he expects staffing to reach full capacity by the end of the year.

"Throughout my administration, our approach has been to fill every position that we can afford to fill at DOJ to stay within our budget," he said. "That’s what we’ve done."

Kaul is asking for funding from the Legislature in the agency’s next budget for more positions, including two more violent crime prosecutors, as well as additional DCI agents and crime lab analysts.

Kaul likewise pushed back on another criticism from Toney about delays from the state crime lab in processing evidence. In 2021, the state crime lab took an average of 128 days to process DNA evidence, often used in sexual assault cases, which was longer than the average of 94 days in 2020 and 97 days in 2021, according to the DOJ's latest annual report. That's despite the lab taking in fewer DNA analysis cases in 2021 compared to 2020 and 2019.

The slowdown was temporary and partly due to the COVID-19 pandemic, said Kaul, who took office in 2019. He also said a switch to probabilistic genotyping — which makes it easier to identify a sample that's degraded or contains more than one person's DNA — means that analysts can solve more cases, although the process is more complex.

"Some of the comparisons can be apples to oranges," Kaul said. "Despite the Legislature's unwillingness to fund our crime labs as we've requested, we've still been making progress in strengthening the labs."

Kaul also touts his crime-fighting credentials, referencing his time as an assistant U.S. Attorney in Baltimore.

"I was a federal prosecutor in one of the most violent cities in the country, and I prosecuted murderers, drug traffickers and gang members," Kaul said. 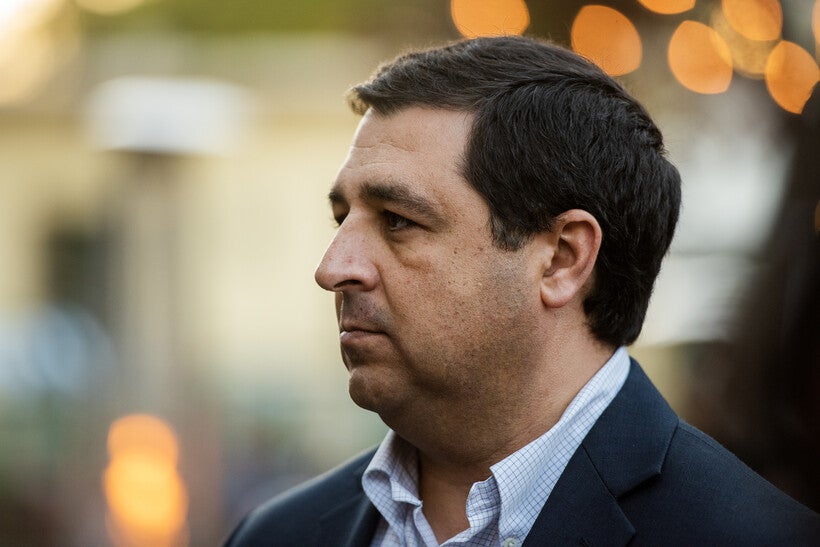 As Election Day nears, each campaign is jockeying for focus, so they can "fight on the ground they’re most comfortable with," said Paul Nolette, an associate professor of political science at Marquette University.

Like Republicans across the country, Toney has been centering his campaign around crime, Nolette observed. And while Kaul ran his own "tough on crime" campaign four years ago, Nolette believes Kaul is mostly taking another approach to motivate Democratic voters this year.

"He really wants to make this a referendum on, as he kind of puts it, the nature of freedom here in Wisconsin," Nolette said. "Like reproductive rights freedom and the freedom of the vote."

Kaul's DOJ defended the Wisconsin Elections Commission two years ago against Republican lawsuits seeking to overturn the 2020 presidential election. More recently, he condemned a Republican-backed investigation led by former Wisconsin Supreme Court justice Michael Gableman into the results of the 2020 election, calling it an "embarrassing, partisan so-called investigation" that wasted taxpayer’s money. The probe faced multiple lawsuits, including one filed by Kaul over Gabelman’s subpoena power.

Kaul has also promised to prosecute threats against election workers this year, a pledge Toney contends Kaul lacks the legal authority to make because those charging decisions lie with local district attorneys.

In response, Kaul said that, while his office would typically work with a DA to handle such cases, the DOJ does have prosecution authority because such threats are crimes of statewide importance.

"Those are attacks on our system of government, and they need to be taken seriously," Kaul told WPR.

Other campaigns may be grabbing more attention than his, but Kaul is trying to remind voters that they still have a big choice when it comes to the race for attorney general.

And, as it was four years ago, Nolette believes the election is likely to be another squeaker.

"This is a good reminder to Wisconsinites that their vote really matters," Nolette said. This is going to be a very tight race. There's a lot of issues that are critically important — abortion, the environment, gun control … election integrity, crime, all of these sorts of issues are very much on the ballot up and down the ticket this year."

Editor's note: This story is part of WPR's series on the election. Read our profile of Republican attorney general candidate Eric Toney here.