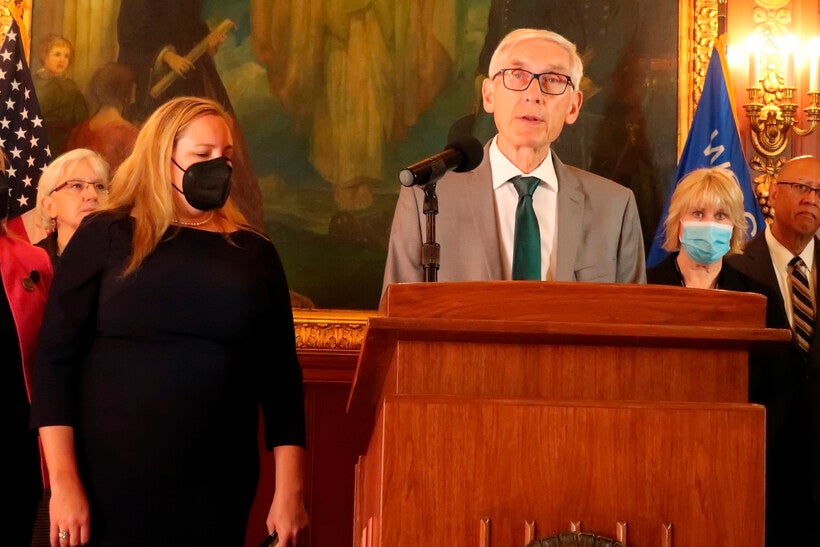 Democratic Wisconsin Gov. Tony Evers calls the Republican-controlled Wisconsin Legislature into special session to create a pathway for a statewide vote to repeal the state's 1849 ban on abortions at a news conference Wednesday, Sept. 21, 2022, in the governor's conference room in the state Capitol of Madison, Wis. Scott Bauer/AP Photo

Proposal to allow for citizen ballot initiatives in Wisconsin would let the public pass laws on any number of issues
By Shawn Johnson
Share:

While it's not the first time Evers has called on Republicans who run the Legislature to repeal the state's pre-Civil War ban, the governor's latest proposal would be more expansive, giving members of the public the power to pass state laws on any number of issues, from redistricting to marijuana legalization.

"If Republican legislators aren't going to uphold the will of the people, then the people of the state should have the right to take a stand at the ballot box," Evers said at a state Capitol news conference.

Republicans who run the Legislature indicated almost immediately that they would reject the plan.

Evers has repeatedly called special sessions of the Legislature to highlight issues where he and Republican lawmakers disagree. The latest came in June, when Evers called for a special session to rescind Wisconsin's 1849 abortion ban. Weeks later, GOP leaders gaveled in and out of the session without taking any votes.

The governor's latest proposal may be headed for a similar fate, but it's different from his last special session call and would represent a dramatic shift in how government works in Wisconsin. If it passed, it would let members of the public sidestep the Legislature and governor to pass laws on their own.

Evers said Wednesday that GOP lawmakers should be open to the plan because U.S. Sen. Ron Johnson recently indicated he favored letting voters decide whether to add exemptions for rape or incest to the state's abortion ban. Evers and Johnson, R-Wisconsin, are up for reelection in November.

"He said let's let the people take care of this," Evers said. "And we agree with him."

But in a statement issued shortly after the governor introduced his plan, GOP lawmakers gave every indication it was a nonstarter in the Legislature.

"Governor Evers would rather push his agenda to have abortion available until birth than talk about his failure to address rising crime and runaway inflation caused by his liberal DC allies," said Assembly Speaker Robin Vos, R-Rochester, and Senate Majority Leader Devin LeMahieu, R-Oostburg. "Hopefully, voters see through his desperate political stunt."

The proposal would then go before voters in a statewide election to decide whether they want to allow for ballot initiatives in Wisconsin. The soonest that could happen would be 2023.

If the governor's plan passed each of those steps, it would open the door to future statewide referenda that don't require the Legislature's blessing.

According to the National Conference of State Legislatures, 24 states have a citizen initiative process that lets people bypass their state legislatures by placing proposed laws on the ballot. Twenty-three states let voters approve or repeal an act of the legislature. Under Evers' plan, Wisconsin voters could do both.

The number of signatures needed to place a question on the ballot would vary.

An initiative to repeal a law passed by the Legislature would require signatures from at least 4 percent of the number of votes cast in the last election for governor, or about 107,000 people using the 2018 election as a benchmark. Proposing a new law would raise that threshold to 6 percent, or about 160,000 signatures. And getting a proposed constitutional amendment on the ballot would require signatures from 8 percent of voters, or about 214,000 people.

Voters in other states where ballot initiatives are allowed have put the power to use. In Michigan this year, voters will decide whether to put the right to an abortion in the state's constitution. Other states are considering ballot initiatives this year to legalize recreational marijuana. And in 2018, voters in Colorado, Missouri and Michigan approved ballot measures calling for nonpartisan redistricting.

Evers has proposed all three ideas, but they've gone nowhere in the Legislature.

"You think about all the items that, in this state, polling shows the vast majority of people support," Evers said Wednesday. "Any one of those would eventually be fair game."

While other issues could eventually be on the table, Evers' pitch Wednesday focused almost entirely on abortion rights, one of the centerpieces of his reelection bid against Republican challenger Tim Michels, who supports the state's abortion ban without exceptions.

In the most recent poll by Marquette University, 63 percent of registered voters said they opposed the U.S. Supreme Court's decision overturning Roe v. Wade. And 83 percent said they supported allowing a woman to obtain a legal abortion if she became pregnant as the result of rape or incest.

While Evers cited Johnson's recent comments as a reason Republicans should support his special session, Johnson criticized the governor in a statement provided by his office.

"Once again, Democrats are seeking to divide the public by exploiting the profound moral issue of abortion by politicizing it before an election that should be focused on the disastrous results of their policies and governance," Johnson said. "Because of the profound nature of this decision, we should not rush the debate, but instead allow enough time for a thorough and thoughtful discussion."

Michels' campaign did not immediately respond to a request for comment.