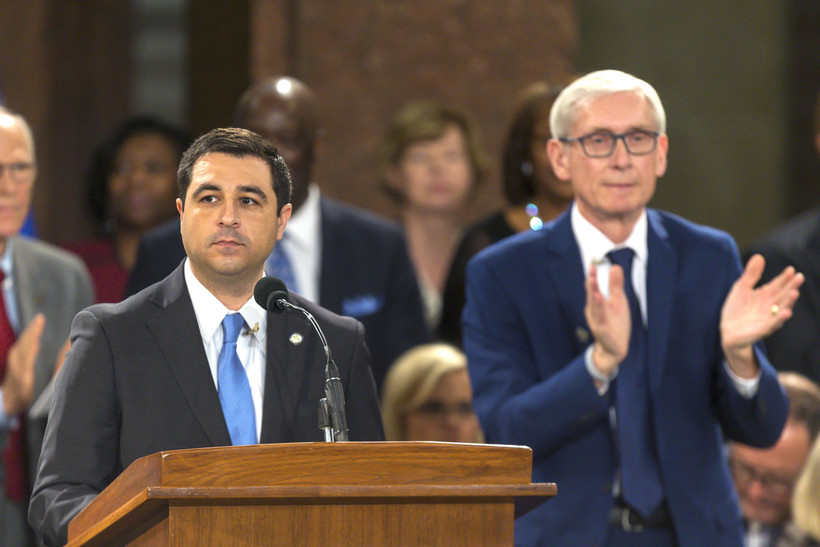 In this Jan. 7, 2019 file photo, Wisconsin Attorney General Josh Kaul speaks during his address at the inauguration of Gov. Tony Evers, right, at the state Capitol in Madison. Andy Manis/AP Photo

Democratic Attorney General Josh Kaul issued a sharp rebuke Monday of a Republican-backed investigation of the 2020 election in Wisconsin, saying the inquiry may have legal flaws that could keep it from moving forward.

The taxpayer-funded investigation, which was called by Assembly Speaker Robin Vos, R-Rochester, and is being led by former conservative Wisconsin Supreme Court justice Michael Gableman, spurred confusion last week after Gableman refuted earlier reports that some subpoena requests to local officials across the state had been scaled back. In the same interview, Gableman likened the Milwaukee Journal Sentinel to Nazi propaganda. Earlier in the week, he said he "(does) not have a comprehensive understanding or even any understanding of how elections work."

Over the weekend, Gableman released a video on YouTube that criticized Gov. Tony Evers’ pushback on the investigation. In the video, Gableman also said "violations of law or protocols or both may have occurred" in the administration of the election, without offering any evidence to back up the claim.

Kaul's criticism of the probe Monday included the release of a state Department of Justice letter to Gableman outlining concerns with the effort. Those concerns include the Legislature overstepping its powers by attempting to conduct a "law enforcement investigation" and the issued subpoenas being "overbroad, vague, irrelevant, and unduly burdensome."

"What we are seeing here is not a serious investigation," Kaul said at the press conference in downtown Madison. "This investigation suffers from glaring flaws that destroys any credibility that its results could have.”

The attorney general is the legal representation for the Wisconsin Elections Commission and its administrator, Meagan Wolfe. The commission and Wolfe have been issued subpoenas in the probe.

In the letter, the DOJ also argued any testimony provided by officials would need to occur before the Assembly elections committee, not in a private office building, as the subpoenas call for.

"The current request is not a lawful request, in our view," Kaul said. "This should happen in front of the full committee."

The letter indicates Wolfe intends to comply with the subpoena's demand to provide documents related to election administration, but that "the recent subpoenas present a number of substantive issues that will need to be resolved before Administrator Wolfe will appear to testify under oath."

Kaul said he hopes Gableman's team will work with the DOJ to modify their requests. However, he also called on Vos to shut down the investigation.

"This fake investigation is an abuse of the Legislature’s authority," he said. "Wisconsin taxpayers shouldn't be on the hook for his beginners guide to election administrations and investigations."

"In order to restore confidence in our election system, Justice Gableman will continue his investigation," Vos said in a prepared statement. "The subpoenas have been issued correctly — a fact backed up by the nonpartisan Legislative Council in a memo requested by Assembly Democrats."

"Justice Michael Gableman does not speak for myself or for the Wisconsin Assembly’s Campaigns and Elections Committee," Brandtjen said in the statement. "Like the public, the committee members learn of Justice Gableman’s actions by radio interviews, newspaper reports and YouTube videos. His videos must have had approved spending by (Vos), as I have not approved them."

Brandtjen said the five mayors issued subpoenas in the probe should not be granted immunity from penalties following the inquiry, as Gableman has said he will do, and argued a "cyber forensic audit" similar to a controversial Arizona election investigation would best serve Wisconsinites.

Brandtjen previously attempted to spearhead an audit along those lines in Wisconsin, but Vos refused to sign subpoenas Brandtjen issued to Milwaukee and Brown counties. Without Vos’ signature, the subpoenas were invalid.

Mike Wagner, professor of journalism and mass communication at the University of Wisconsin-Madison, said the conflict between Vos, Gableman and Brandtjen is typical of recent dynamics within the Republican Party and shows a "crash to be as close to President Trump as possible."

Former President Donald Trump has continued to push false claims of election fraud across the country in the year following the election.

"It’s really striking to see elected officials and appointed officials engaged in a back-and-forth about who can be more skeptical about an election that was clearly shown repeatedly to be extraordinarily fair and very well conducted," Wagner said.

From a political messaging standpoint, Wagner said Gableman is trying to control the conversation about the investigation by issuing public statements via YouTube, rather than more traditional means, like press conferences.

"It is something he knows news organizations will cover, but it also affords him the opportunity to not respond to questions about it," he said.

Wagner said he doesn't think there is any strategy behind the Gableman pushing back so strongly amid last week's confusion over subpoenas.

"I don't detect any specific strategy in this behavior, because it could be interpreted in so many different ways — most of which make the investigation look extraordinarily incompetent," he said.

The GOP-backed election investigation comes after Wisconsin has completed a series of routine state election audits and a presidential recount in the state’s two largest counties. None of those reviews have uncovered widespread fraud or wrongdoing. There have also been numerous Republican-backed lawsuits in the state, all of which have failed to result in findings of wrongdoing by election officials or voters.