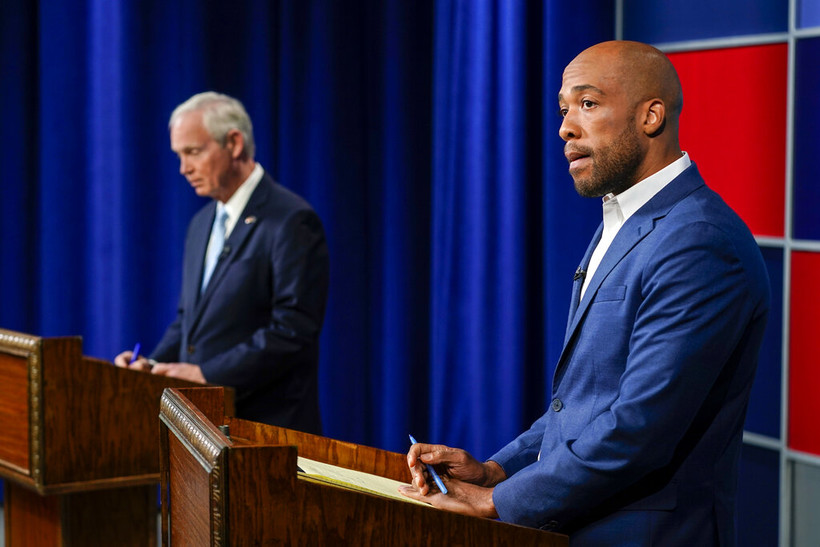 The candidates covered a long list of topics from marijuana legalization, to crime, to the insurrection
By Rich Kremer
Share:

Republican U.S. Sen. Ron Johnson and his Democratic challenger, Lt. Gov. Mandela Barnes, staked out clear differences at their first debate Friday on everything from crime, to abortion, to the insurrection at the U.S. Capitol.

The debate, hosted by the Wisconsin Broadcasters Association in Milwaukee, moved quickly from question to question with both candidates giving brief answers to a long list of topics.

Here are some of the highlights.

The candidates were asked where they stand on the question of federal legalization of marijuana following President Joe Biden's announcement that he will pardon thousands of people convicted of federal marijuana possession and direct the Justice Department and Health and Human Services to review its status as a Schedule 1 narcotic.

Johnson said the only role the federal government should play is making banking easier for companies selling marijuana in states where it's legal.

"But I would suggest any state should really take a look seriously at the harm being done by the legalization of marijuana," said Johnson.

Barnes called marijuana harmless and said Wisconsin is losing potential tax revenues to neighboring states like Michigan and Illinois, where it is legal.

"If we have federal legalization of marijuana, we could do so much more in this state," said Barnes.

Panelists asked candidates a few questions about crime, the issue Republicans have driven home in a TV ad blitz for weeks. On the topic of bail reform, Barnes discussed legislation he supported while in the State Assembly that would have eliminated cash bail. He said the intent of the bill was to ensure violent offenders would not be able to "buy their way out of jail."

"That's the system that we have now," said Barnes. "And this sort of reform that I support has been supported by Republicans all across the country as well."

Johnson, in turn, said cash bail is one of the tools courts have to make sure dangerous criminals stay in jail. He also attacked Barnes for his call to reduce Wisconsin's prison population by half. 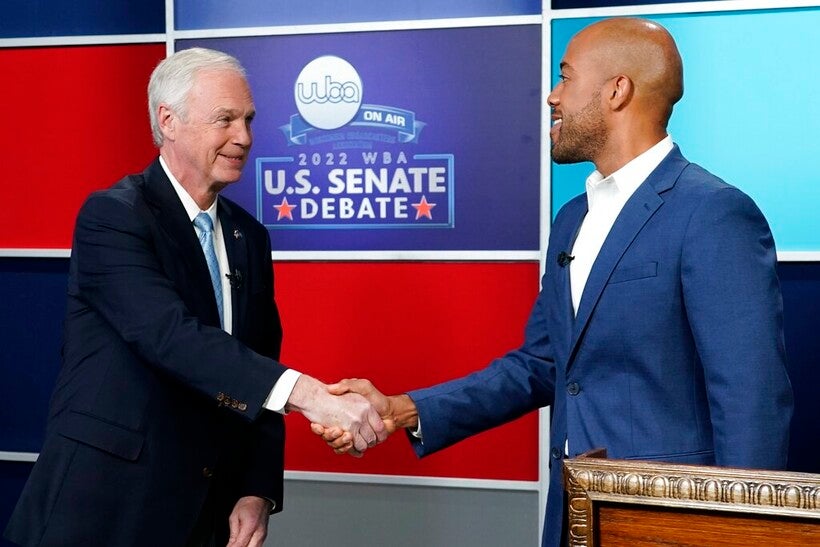 The Candidates were asked to list three actions Congress should take to address rising crime and Milwaukee's growing murder rate.

After referencing friends lost to gun violence in the city, Barnes said the way to address crime is by increasing funding for schools and incentivizing employers to provide good paying jobs.

"And we also invested $100 million into law enforcement, public safety and crime prevention initiatives through the American Rescue Plan, which Sen. Johnson voted against," said Barnes.

Johnson said the first thing to do to address crime is support law enforcement, by way of compliments.

"Whenever I see a police officer, I go up to him and say thank you for your service," Johnson said. "And if I have time I say, 'Please don't be dispirited by the loud few who are trying to defund you.'"

Johnson attacked Barnes for prior comments about reallocating funding from police budgets to social services. While GOP ads have criticized Barnes for wanting to "defund police," Johnson conceded "I know he doesn't necessarily say that word."

Johnson and Barnes were asked if they would support any restrictions on military-style assault rifles and whether background checks for gun purchases should be universal.

Johnson said the U.S. already has "something like 10,000 gun control laws on the books" that aren't properly enforced.

"If we want to cut down on crime, the overall macro issue is we need to renew faith, strengthen families, have more supportive communities," said Johnson. "Another gun control law just isn't going to work."

When asked about abortion policy, Barnes talked about his mother and how she had an abortion due to an unviable pregnancy. He then attacked Johnson for celebrating the U.S. Supreme Court decision overturning Roe v. Wade.

"If I were in the U.S. Senate, I would absolutely vote to codify Roe v. Wade, to protect the right to an abortion and the right to choose into law once and for all to protect women's rights," said Barnes.

Johnson said he supported the overturning of Roe because the issue should be decided by states, despite supporting numerous national abortion ban bills prior to the high court's ruling in June. Johnson reiterated his suggestion that residents decide the issue directly by referendum.

"We all agree that society has responsibility, protect life," said Johnson. "But at what point do society have the responsibility to protect life in the womb? I want we, the people, to decide that. I would have one vote like every other Wisconsin citizen."

Republicans in the state Legislature recently rejected a special session called by Gov. Tony Evers that could have allowed for citizen ballot initiatives.

Johnson and Barnes were asked whether they would support the bipartisan "Respect for Marriage Act" coauthored by Wisconsin Democratic U.S. Sen. Tammy Baldwin. The bill was introduced after conservative U.S. Supreme Court Justice Clarence Thomas wrote a concurring opinion to the Supreme Court's decision overturning Roe that said other decisions on gay marriage and interracial marriage should also be revisited.

"I don't want millions of lives disrupted," said Jonson referring to gay marriage. "But there's another element to this thing. The way the law is written right now, it threatens religious liberty. So before I would ever consider voting for that bill, I would want to see very strong protections for religious liberty."

Barnes noted many thought Roe v. Wade would never be overturned either and said he's supported gay marriage since he was in the state Legislature.

"It's a shame that we're in this place right now having this same old, tired argument," said Barnes. "But here we are. We need people who are going to fight to make sure you can love who you love and also make your own health care decisions without interference from politicians."

The candidates were asked if they would support the Electoral Count Reform Act, which aims to clarify the role of the Vice President in certifying electoral ballots from states and raise the threshold needed for Senators to object to the certification of ballots.

Barnes said such reform is needed to prevent another insurrection of the U.S. Capitol, and to and restore faith in elections.

"People don't trust the process because we have folks elected to high office who spend their time trying to overturn an election, trying to cast doubt into a free and fair election, which election observers say was the most secure in our lifetime," said Barnes.

Johnson, who initially planned to object to the certification of 2020 electoral ballots from some states including Wisconsin, said he would support the legislation. He then pushed back against attacks that he has downplayed the violent insurrection.

Barnes said Social Security funding should not be subject to annual authorization by Congress and federal funding for the entitlement program can be increased by "making sure the wealthy pay their fair share."

"We need to make sure that billionaires are paying more into this system," said Barnes.

Johnson pushed back on attack ads claiming he wants to cut Social Security and Medicare, saying the greatest threat to the programs is out of control spending and the nation's growing deficit.

"What I've been saying is we should be looking at all spending so we can prioritize," said Johnson. "And Social Security, Medicare would be at the top of the priority list."

The candidates were asked what actions they would like to see taken to address climate change. Barnes said climate change "is already here" with impacts being felt by farmers in Wisconsin and local roads and bridges being wiped out by 100 or 500-year storms on a regular basis.

"This is our future that we're talking about," said Barnes. "What we need to do is reduce carbon emissions. What we also need to do is move towards a clean energy economy and make sure Wisconsin is in the driver's seat."

"So, I don't deny climate change," said Johnson. "The question is, can you really do anything about it when China, when India, they're going to be burning fossil fuels. America's going to have to burn fossil fuels. Eighty percent of our energy comes from fossil fuels right now. And that's not going to change anytime soon because wind and solar are not reliable."

Johnson and Barnes were asked whether they felt President Biden's administration promising to forgive up to $20,000 in federal student loan debt for some borrowers is fair.

"This is grotesquely unfair for people who never went to college or paid off the student loans," said Johnson.

"Absolutely, it's fair that people get some student loan relief," said Barnes.

Both candidates were given one minute set the record straight about their records or attacks against them during the campaign that they felt were misleading.

Johnson said he was proud of his record as Wisconsin's U.S. Senator and the 2017 Republican tax cut, which he said helped 95 percent of American businesses receive a tax cut. He also mentioned his co-founding of Milwaukee's Joseph Project, which works with a Milwaukee church to offer job training and support to formerly incarcerated individuals. Finally, Johnson mentioned his experience as a business owner.

Barnes used a line from an attack ad describing him as "different" to say he's embracing it and will push to help working-class residents and push back against abortion restrictions.

Johnson and Barnes are scheduled to debate for a second and final time Thursday.