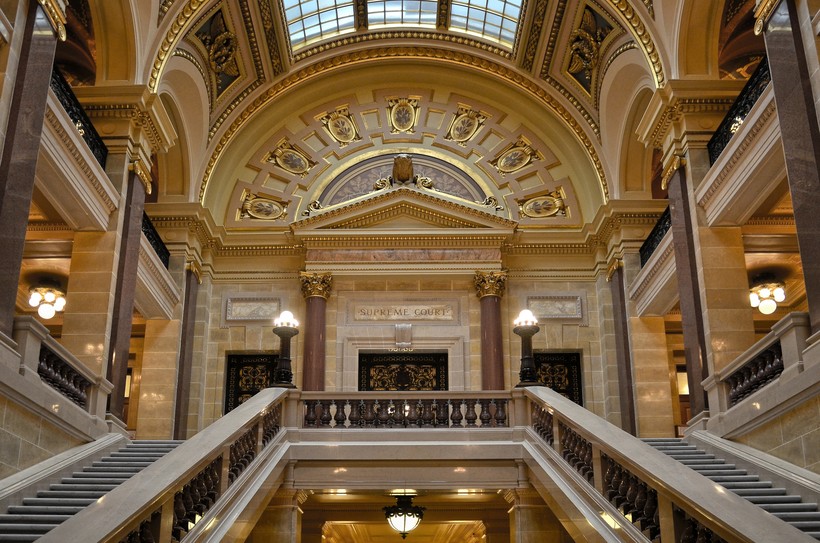 Six months after they struck down Wisconsin's "Safer at Home" order, state Supreme Court justices heard arguments Monday in another challenge to the emergency powers Gov. Tony Evers' administration is using to fight the COVID-19 pandemic.

The case challenges the emergency orders Evers used to issue and reissue Wisconsin's statewide mask mandate, which is currently set to expire on Nov. 21.

At issue is whether Evers has the power to issue multiple emergencies for the same pandemic without the Legislature voting to extend them.

The latest challenge puts a spotlight on conservative Justice Brian Hagedorn, who sided with the governor's administration earlier this year but struck a skeptical tone during arguments Monday.

"Those are broad, extraordinary powers that it seems like the Legislature wanted to only allow for a very short period of time," Hagedorn said during oral arguments Monday.

The case was brought by Jeré Fabick, a board member and policy advisor for The Heartland Institute, a free-market think tank, as well as the president of a multi-state Caterpillar dealer. Fabick is also a major GOP donor who gave $20,000 to conservative Wisconsin Supreme Court Justice Rebecca Bradley during her successful bid for the court in 2016.

Evers issued the mask mandate using a state law that gives governors the power to order 60-day public health emergencies in Wisconsin. It's different than the law his administration used earlier this year to issue its "Safer at Home" order.

Evers has used his powers to declare three public health emergencies this year. The first came March 12, at the beginning of the COVID-19 pandemic. The second, issued July 30, led to the first mask mandate and came as COVID-19 cases were beginning to climb. And the third, declared on Sept. 22, extended the mask mandate as COVID-19 cases were surging on University of Wisconsin campuses.

Evers, who is being represented by the Wisconsin Department of Justice, has argued that he issued multiple emergency declarations because the COVID-19 pandemic has become more severe.

"This is not simply a COVID-19 case," Jurss said. "The question before the court implicates the governor of Wisconsin's ability to address any emergency circumstances that may befall our state, whether caused by war, fire, flood, or as here, a viral pandemic."

Fabick's challenge argues that state law prevents a governor from issuing multiple emergency orders for the same pandemic unless extensions are granted by the Legislature.

"Yes the numbers had increased," argued Fabick's attorney, Matthew Fernholz. "The numbers are going to go up or down on a daily basis. That doesn't justify a new emergency or a new public health emergency."

If successful, the lawsuit would prohibit the governor from issuing similar emergency orders in the future without the Legislature's consent.

Evers has argued that state lawmakers have the power to revoke an emergency declaration if they want, a step that GOP leaders who run the Legislature have chosen not to take.

"The Legislature has not used its important safeguard if it believes that the governor improperly pushed that emergency button," Jurss said.

Last month, a circuit court judge agreed with that argument, ruling in favor of Evers in a separate lawsuit challenging the mask mandate.

Evers has also argued that Fabick lacks the legal standing to challenge the order since he has not demonstrated that it has personally harmed him. Fabick argues that he has standing as a taxpayer because enacting the orders would result in a waste of government funds.

While the case before the court involves broad questions about the balance of power in state government, it comes at a time when Wisconsin's COVID-19 numbers are the worst they've been since the pandemic began.

The Wisconsin DOJ has argued that while the current situation is dire, Evers' mask mandate initially lowered Wisconsin's COVID-19 caseload. Those cases increased, the DOJ argued, after in-person instruction resumed at K-12 schools and universities.

"While I know it may feel like a long time ago, at this point in August, Wisconsin's COVID-19 rate of spread was actually slowing," Jurss told justices. "And then the school year started and so our numbers skyrocketed."

Also last week, Nancy Knight of the U.S. Centers for Disease Control and Prevention said Wisconsin is third in the nation for the number of COVID-19 cases by population.

The state's mask mandate requires people 5 years old and older to wear masks in indoor or "enclosed" public places when people who don't live with them are present. There are exemptions for certain activities, like eating, drinking and swimming.

It's unclear how the Supreme Court might rule in this case.

When the court struck down "Safer at Home" in May, it had a 5-2 conservative majority, a margin that has since been trimmed to 4-3.

That has put the focus squarely on Hagedorn, who joined the court's liberals in voting to uphold "Safer at Home."

On multiple occasions Monday, Hagedorn sent signals that he might view this case differently.

"Nobody's questioning the governor's sincerity in trying to do what he thinks is right here," Hagedorn said. "But he can only do what the power he's been given to do."