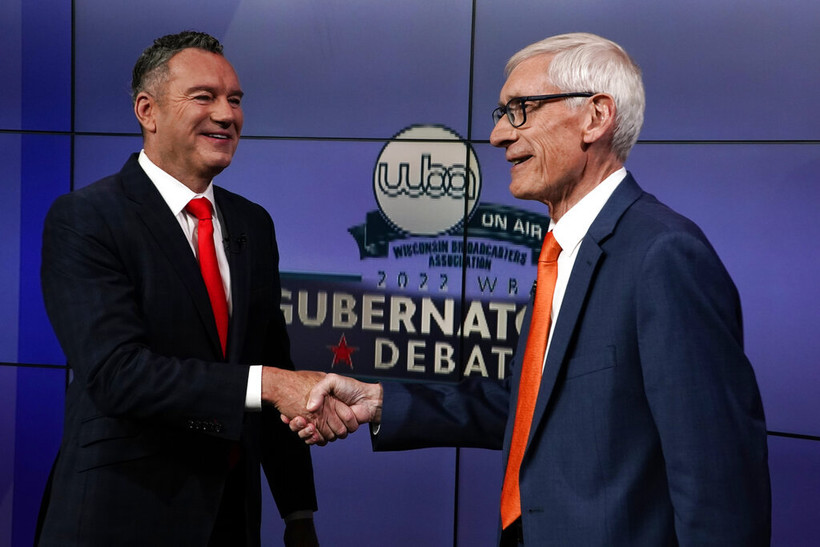 While the debate was short on fireworks, Evers and Michels offered contrasts on issues ranging from the state's workforce to teaching about race in schools
By Shawn Johnson
Share:

The first and only debate in the race for Wisconsin governor was short on fireworks but offered plenty of contrasts between Democratic Gov. Tony Evers and Republican challenger Tim Michels.

Evers and Michels are locked in one of the closest watched and expensive races for governor in the country. Based on recent polling, they're virtually tied.

Their debate, which was hosted by the Wisconsin Broadcasters Association, gave each candidate roughly a minute to respond to questions on a wide range of issues. Here are a few.

One of the more noteworthy exchanges of the night came when candidates were asked how the state should go about attracting and retaining young adults to Wisconsin to stave off a workforce shortage.

Michels said the answer was in making the tax code more competitive and getting "people off their couches" and back to work.

"We created an entire class of lazy people during COVID," Michels said. "It's time to get them back engaged in our economy, to stop just sending them the unemployment checks."

"I'm still trying to battle the issue of lazy Wisconsinites when we have so few people that are unemployed in the state of Wisconsin," Evers said.

Both Michels and Evers said they favored some kind of tax cuts to deal with the rising cost of living under inflation, which voters have identified as their top concern a month out from the election.

They might have the money to do it if current trends hold. Wisconsin's budget ended the most recent fiscal year with a record $4.3 billion in its general fund.

"We're going to lower our taxes on a middle-class folks in the state of Wisconsin by 10 percent," Evers said, referencing a plan he introduced this year to spend the state's projected budget surplus.

Michels has said he's open to a flat tax in Wisconsin as long as no income tax bracket ends up paying more. The state currently has a progressive income tax, which taxes wealthier residents at a higher rate.

Accepting the results of the next election

During his Republican primary campaign, Michels, who was endorsed by former President Donald Trump, would not commit to certifying the results of the 2024 presidential election.

On Friday, Michels changed his tune about 2024. He said that as governor, he would sign the Republican election bills Evers had vetoed, many of which would change the rules for absentee voting and ban private funding to run elections.

"Under a Gov. Michels administration, we will never have questions," Michels said. "And of course, therefore, I will certify any elections after I'm elected Governor."

Both candidates were later asked whether they would accept the outcome of the 2022 election.

"Yes," Evers. "No matter who wins my opponent or me, I will certify that election."

Michels did not make specific reference to the 2022 race, instead saying again that said he would certify "the next election" after he's governor.

Speaking to another top issue for Republicans — crime — Michels said his election would send a message to criminals.

"I'm going to let them know that there's a new sheriff in town," Michels said. "They're going to understand if they're not willing to do the time, they shouldn't do the crime."

When asked about gun control proposals, Michels said he opposed a so-called "red flag" law that would let judges temporarily remove guns from owners who pose a danger to themselves or others.

"Responsible gun owners don't have to worry about red flag laws because it'll never be an issue for them," Evers said.

Michels said he opposed the laws because they'd potentially let a "disgruntled ex" get someone's guns taken away.

"The left always just wants to take away guns," Michels said. "I will protect your Second Amendment rights."

Teaching about race in school

Michels and other Republicans have attacked the public school system for teaching what they say is "critical race theory," a university level academic theory about how inequality gets reproduced and maintained in society.

Democratic critics of the bill argued it would prevent schools from teaching about systemic racism, including the history of slavery in the U.S. Evers vetoed the plan.

Candidates were asked how the history of race should be taught in Wisconsin.

Evers said schools should teach about race, citing as an example the interment of Japanese-Americans during World War II.

"We shouldn't be afraid of that," Evers said. "We are a strong state and a strong country. If we can't talk about things like that we're in sad shape."

When it came to abortion – a top issue for Democrats —Michels and Evers were asked what their position was on people crossing state lines to get an abortion where it's legal.

"That's something that we'll have to sit down and work out," Michels said. "But, you know, I'm not going to be this radical guy with checks at the border."

Evers, who like other Democrats has used the abortion issue to try to differentiate himself from Michels, did so again Friday.

"Women should have the ability and the right to make decisions about their health care, including reproductive health care, and that includes abortion," Evers said.