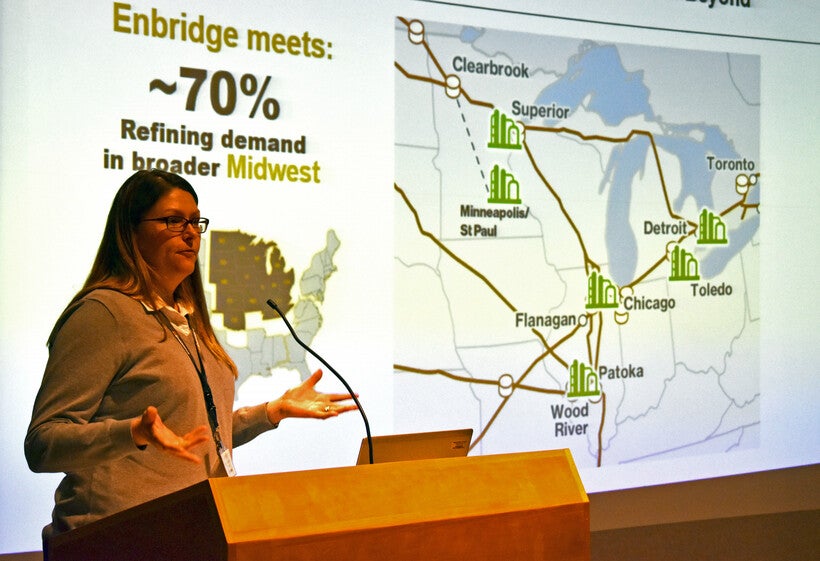 'We Are On The Brink Of Disaster': Public Testifies On Proposed Pipeline Reroute

People expressed fears that a proposed pipeline project threatens the climate, pristine waters and Native communities in northern Wisconsin while others claim it can be built safely and provide much-needed jobs, in a virtual public hearing on Wednesday.

Around 360 people registered to provide input about the impact of Enbridge's Line 5 relocation project on northern Wisconsin waterways as part of the hearing held by the Wisconsin Department of Natural Resources on permits being considered for project. The pipeline carries up to 23 million gallons of oil and natural gas liquids per day from Superior to Sarnia, Ontario.

The Canadian energy firm is proposing a roughly 40-mile reroute of Line 5 outside the Bad River Reservation in Ashland and Iron counties. Enbridge is seeking to relocate the pipeline after the Bad River Band of Lake Superior Chippewa filed a lawsuit against the company aimed at shutting down and removing Line 5 from the tribe's reservation.

The company's preferred route runs south of the reservation and north of Mellen in Ashland County. The proposed route is expected to cross more than 180 waterbodies and temporarily impact at least 109 acres of wetlands.

Cathryn Hanson, Enbridge's environmental supervisor, said in a media call prior to the hearing that the route is among four the company considered.

"Our route analysis really focused on minimizing the length of the pipeline to the extent practical, while protecting resources and still being responsive to landowner and community input," said Hanson.

The company's proposed route would still reside within the Bad River Watershed, which drains more than 1,000 square miles along the shore of Lake Superior. The Kakagon and Bad River sloughs — referred to as the "Everglades of the North" — lie at the mouth of the watershed, comprising around 16,000 acres of internationally recognized wetlands.

Hanson said the preferred route is about 60 miles shorter with fewer environmental impacts than the longest alternative route outside the watershed.

A majority of those who spoke, including residents from the region and across Wisconsin, voiced opposition to the project, taking issue with the continued transport of fossil fuels that contribute to climate change. They highlighted more frequent, intense storms that have occurred in the region in recent years.

"This problem is superheating the planet's climate, causing mega storms, drought and floods, the melting of the polar icecaps, and our ability to live on this planet," said Amy Wilson, resident of Port Wing. "We have 10 years to reduce our burning technology. Both frack gas and tar sands oil is a disaster for our climate."

Tricia Zunker, who's running against Republican U.S. Rep. Tom Tiffany in the 7th Congressional District, also cited the threats the project poses to the Bad River Band of Lake Superior Chippewa and their treaty rights to hunt, fish and gather in the region.

"We need to ensure clean air, clean water, and that our land and waterways stay protected for generations to come," said Zunker.

Philomena Kebec, an Ashland County board member and Bad River tribal member, called the DNR's permitting process "as serious as a heart attack." She urged the agency to consider the impact of the project to downstream waters as part of its environmental impact statement.

"In the city of Ashland, our water intake pipe comes from Lake Superior. And, my daughter — I have five kids, and they go swimming in the lake pretty much daily in the summertime," said Kebec. "We depend on a clean and healthy environment, and so this analysis must be done."

Mic Isham, executive administrator of the Great Lakes Indian Fish and Wildlife Commission, raised issued with the timing of the hearing as Enbridge has not yet acquired all the land needed for the project. He also noted the DNR has indicated that it tentatively plans to approve waterway and wetlands permits with modifications.

Enbridge said Wednesday that it had completed waterway and wetlands surveys for 99 percent of the route.

Isham also highlighted that oil production and transportation is a major driver of climate change, noting tribes are particularly vulnerable to its impacts given their ties to the land and subsistence lifeways.

Jamie Dunn, a retired DNR hydrogeologist, said the pipeline project follows the recharge zone of a groundwater aquifer that serves a majority of residents living nearby.

"All wells within 1,200 feet need to be documented by Enbridge because those are the wells that are going to be impacted first by a release," said Dunn.

A number of people also highlighted that public comment on the permits closes before adequate information is available to evaluate the project, including Nancy Larson with Wisconsin's Green Fire. The DNR's former northern water program leader said an environmental impact statement for the project should address high quality habitats and waters and environmental justice aspects, as well as the potential for spills in the region.

Others also testified that they feared the impact of the project would pose a negative economic impact to the region's tourism industry. But, labor unions including the Wisconsin Pipe Trades Association urged the agency to approve permits for the project.

"The relocation of this segment of Line 5 is required to remove the existing pipeline from the Bad River Reservation while continuing to provide safe and efficient transportation of essential energy, including natural gas liquids to Northeast Wisconsin," said Terry Hayden, the association's president.

Hayden said around 2,100 trucks would need to leave Superior daily to transport the products carried by Line 5. Derek Pederson with the Laborers' International Union of North America Local 1091 in Duluth agreed that the pipeline is the safest way to transport oil.

"Not only will it feed the families of the hard-working men and women in the trades, it will also be the safest most technologically advanced pipeline Enbridge has ever put in the ground," said Peterson.

If the project is approved, the company said in its application that it will dig a pipe trench using an excavator or "by blasting rock as necessary" during construction. Waterways are normally isolated from construction activities to prevent any impacts to water quality.

Enbridge anticipates horizontal directional drilling would be used to install pipe under sensitive environmental areas although the company said it will work with the DNR on acceptable methods for water crossings.

Residents and environmental groups pointed to the company's history of spills, including one of the nation's largest inland spills near Marshall, Michigan, in July 2010. The rupture cost the company $1.2 billion to clean up 1.2 million gallons of oil from the Kalamazoo River.

Line 5 In The Straits of Mackinac Resumes Operation

The company has said Line 5 has been operating safely since 1953, noting it has invested billions in safety upgrades since 2010.

Enbridge has filed for permits with multiple agencies including the DNR and U.S. Army Corps of Engineers, as well as Public Service Commission of Wisconsin. The PSC would determine whether Enbridge would be allowed to use eminent domain to obtain private land for the pipeline's relocation.

The PSC recently gave the company until the end of July to obtain land voluntarily for the project before moving forward in the process.

"We've said all along that we're confident that we'll be able to come to agreements with 100 percent of the landowners along the route, and we are just about there," said Jennifer Smith, Enbridge's community relations manager.

Smith said she couldn't provide specifics on how much land the company still needed to obtain for the project.

Multiple groups and landowners want the commission to hold a contested case hearing. More than 1,400 people have signed a petition requesting a hearing.

Line 5 provides around 65 percent of the propane supplied to residents in Michigan’s Upper Peninsula and around 55 percent of Michigan’s propane fuel. The project's opponents say very little of that fuel is used to heat homes or businesses in northern Wisconsin.

The company has said the project would employ around 700 workers during peak construction and likely cost more than $100 million although it's still finalizing cost estimates.

Enbridge hopes to obtain the necessary permits by early next year and begin construction shortly thereafter, which the company expects will last six to eight months.

Editor's note: An earlier version of this story misquoted Tricia Zunker as saying "plants and waterways." It was corrected on Thursday, July 2, 2020, at 11:17 a.m.