In this July 19, 2002 file photo, the Mackinac Bridge spans the Straits of Mackinac and is shown from Mackinaw City, Mich. Enbridge provided a report on alternatives to replacing its aging Line 5 under the Straits on Friday, June 15, 2018. Carlos Osorio/AP Photo

Canadian energy firm Enbridge has temporarily shut down operation of its Line 5 pipeline in the Straits of Mackinac after a Michigan judge ordered the company to shut down the pipeline "as immediately as possible."

The 67-year-old pipeline carries up to 23 million gallons of oil and natural gas liquids from Superior to Sarnia, Ontario. It splits into two 20-inch pipelines for roughly four miles under the straits connecting Lakes Michigan and Huron.

The dual pipelines were shut down one week ago after the company discovered an anchor support had shifted position, but Enbridge resumed operation of the west leg of Line 5 on Saturday afternoon after it said damage was isolated to the east segment of the pipeline.

The judge ruled Enbridge failed to provide sufficient documentation about the safety of resuming operations on the west leg of the pipeline, as well as the nature and cause of the damage to Line 5. 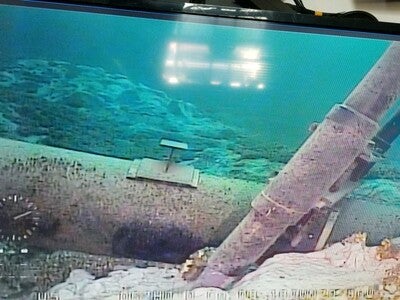 A photo depicting damage to an anchor support on the east leg of Line 5 within the Straits of Mackinac.
Photo courtesy of Enbridge via State of Michigan

Enbridge has argued that it can safely operate the west segment of Line 5.

If the company is wrong, Jamo wrote that the risk "is so substantial and irreparable, and endangers so many communities and livelihoods and the natural resources of Michigan, the danger far exceeds the risk of financial loss" to the company.

The company may not resume operation until at least Tuesday, when a hearing is scheduled to take up the matter.

Michigan's attorney general said in a statement that it's grateful for the court's decision.

"While the fact that Enbridge reactivated one of the lines before consulting with the State is concerning, the fact that the company has failed to disclose the cause of this damage is equally alarming, considering the impact a breach in the pipeline could have to our state residents and economy," wrote Nessel.

Nessel said the ruling was a "short-term fix" and that the state would continue to work to remove Line 5 from the lake bed. Last year, she sued the company, asking for a shutdown of Line 5 in the Great Lakes after negotiations between the state and company reached a standstill. Enbridge wants to build a $500 million tunnel to house a new pipeline in the Straits Of Mackinac.

Michigan Gov. Gretchen Whitmer's office said in a statement that Enbridge's decision to resume operations following the damage to Line 5 was "reckless and unacceptable."

"Enbridge owes a duty to the people of Michigan and must answer to the state for how it treats our Great Lakes," said Tiffany Brown, the governor's spokesperson. "The governor will continue working to keep our water safe."

In a statement Thursday, Enbridge said it was disappointed with the court's ruling.

The energy firm said it will submit information on its work with the Pipeline and Hazardous Materials Safety Administration (PHMSA) in response to the court's ruling that the company failed to adequately document its involvement with the federal regulator for the court.

“Inspections have determined that the west segment of Line 5 crossing the Straits is safe for operations and which PHMSA did not object to restarting; we had shut down the east segment of the pipeline pending a review of a disturbance that was discovered on one of the screw anchors and an assessment of the East leg’s fitness for service," said Vern Yu, executive vice president with Enbridge. "Enbridge is committed to protecting the environment and the waters of the Great Lakes, while keeping energy flowing safely and reliability to the people who need it."

Enbridge said Line 5 is a vital source of energy for Michigan and surrounding areas and has operated the pipeline safely in the Great Lakes since 1953. The company said a prolonged shutdown would threaten fuel supplies in the region.

Environmental groups like the National Wildlife Federation have pointed to spills that have taken place on the land-based portion of Line 5, as well as the company's 2010 release of more than 843,000 gallons of oil into Michigan's Kalamazoo River, as examples of the danger posed by the company's pipelines.

Enbridge has said it has spent billions in safety and technology upgrades since then to improve the integrity of its pipelines.

Thunderstorms, Hail In The Forecast For Wisconsin
CDC: Mask Up In Some Situations Even If Fully Vaccinated Against COVID-19
Wausau Demolished Its Mall. Could What Comes Next Be A New Model For Small-City Downtowns?
The Philippines Wins Its First Olympic Gold After Nearly 100 Years Of Trying
Department Of Health Services: 'We're On The Path To A 4th Surge'