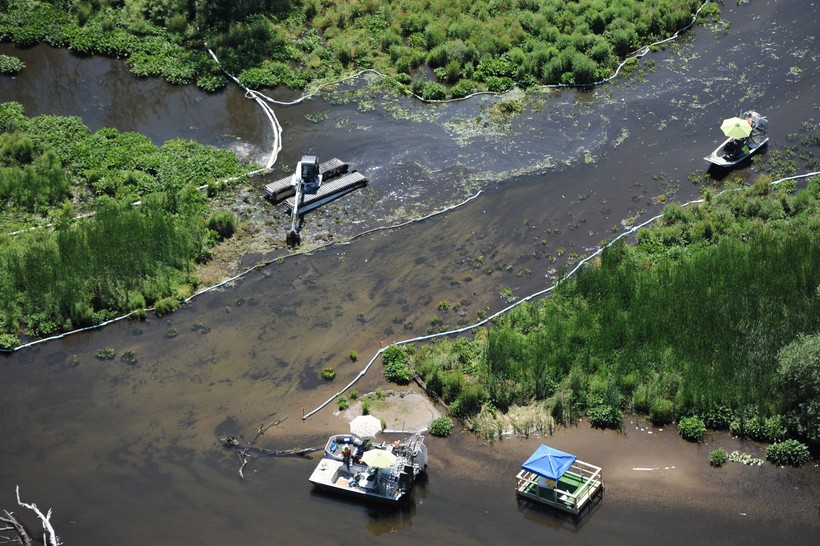 Clean-up from the Enbridge oil spill in the Kalamazoo River in 2010. Joe Raymond/ AP Photo

The 2010 release of 843,000 gallons of oil from an Enbridge pipeline near Marshall, Michigan, has cost $1.2 billion to clean up. The cost to Enbridge in fines and additional safety measures pales in comparison to damage from the spill, said Mike Shriberg, executive director of the National Wildlife Federation's Great Lakes Regional Center.

"We’re calling on Congress, the Obama administration to actually allow for higher fines and actually create real deterrents to oil spills ... You could see this as the cost of business, whereas oil spills should not be the price that communities have to pay," Shriberg said.

Enbridge must obtain third-party oversight to verify its compliance with the settlement. The terms require the company to put together a report of whether Line 10 near West Seneca, New York, should be replaced, in addition to inspections and studies related to its Line 5 that runs under Michigan’s Straits of Mackinac. The settlement also includes the replacement of its aging Line 3 pipeline that runs from Canada to Superior.

However, the project has been delayed in Minnesota after environmental and tribal groups demanded and succeeded in obtaining a separate environmental assessment of the Line 3 replacement and a proposed, so-called Sandpiper project.

"We’re hopeful that this settlement will instill a new sense of urgency at all levels of Minnesota government, from the governor’s office to the agencies," said Enbridge spokeswoman Shannon Gustafson.

Enbridge must do annual inspections of the pipeline's interior if it's not replaced by the end of 2017.

U.S. Pipeline and Hazardous Materials Safety Administration regulations require inline inspection of pipelines every five years, according to Gustafson. Some pipelines, see inspections every three years, including Line 3, depending on Enbridge's evaluations.

"We are already continuing to monitor and maintain Line 3 very vigilantly," Gustafson said.

The Minnesota delay has put permitting of a 14-mile stretch of the pipeline in Wisconsin on hold as well. The line currently carries around 390,000 barrels of oil per day on the U.S. side, which Gustafson said is about half of the line’s capacity.

The Kalamazoo River spill has transformed the company, she said, a sentiment shared by Brad Shamla, vice president of the company’s U.S. operations.

"We thought we had a pretty good safety culture at Enbridge," he said in a conference call Wednesday with reporters. "This incident caused us to take a long, hard look in the mirror. You can’t go through something like that and not change and we did."

He cited Enbridge’s investment of $5 billion to improve safety of pipelines, increased use of technology in detecting potential anomalies in pipelines and more than 800 inspections of its lines. In addition, he pointed to around 1,600 exercises and drills in the past four years to improve the company’s response to spills.

The steps that Enbridge has taken, or will take, as a result of the settlement are things the company should've done in the first place to protect communities from oil spills, said the National Wildlife Federation's Shriberg.

"It seems like basically business as usual for these pipelines," he said. "The fact that there are increased requirements for inspections, maintenance and oversight – that’s all to the good. But, we think that should be what’s already happening. It’s unclear to us how much of this was Enbridge’s operations and maintenance plans that are now put into a consent decree."

The settlement also includes requirements for Enbridge to strengthen its emergency preparedness in the event of spills. More information about the settlement can be found on the Justice Department’s website