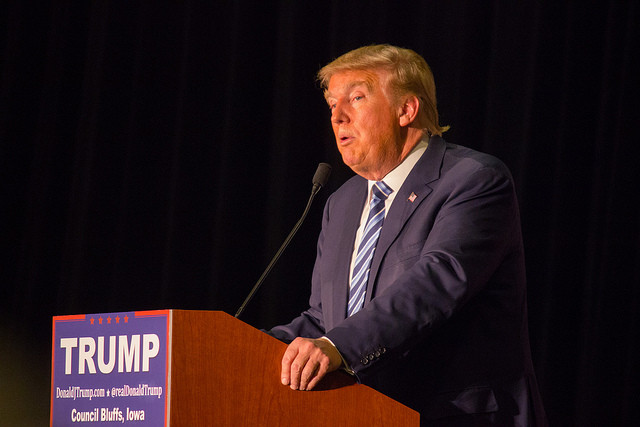 Some people may call Van Mobley a "lone wolf," a "party outsider" or maybe even a maverick. That's because the village president of Thiensville holds a special distinction this election cycle: He might be the only elected official in Wisconsin who is publicly supporting Donald Trump's campaign for president.

Trump is leading the Republican primary field and in the polls in Wisconsin. However, the presidential candidate is far behind in one part of his campaign here: He doesn't have any high-profile GOP endorsements in Wisconsin.

"I think Trump is ahead, so, you know, if politicians are supposed to reflect the will of people, I'm not all by myself at all," he said.

Mobley isn't a complete stranger to statewide politics. He ran for state schools superintendent in 2009, though he never made it out of the primary.

He’s said he’s "not familiar" with any other elected officials in Wisconsin who support Trump.

"But I'm sure that there will be more and more in the future," he said.

Still, for the time being, no members of Wisconsin's congressional delegation, no state lawmakers, and no statewide public officials past or present have publicly endorsed Trump. The campaign's national headquarters didn't return requests for comment about any other endorsements in the state.

Mobley said he supports Trump because of the candidate's opposition to the Trans-Pacific Partnership, an international trade deal. He also said he appreciates that Trump doesn't support broad intervention in the Middle East.

"I've been around a long time. I've seen a lot of campaigns," Mobley said. "I think Trump is the frontrunner. He wasn't always the frontrunner. I think it was a tough race. I think the Republican Party will now unite around him and we're going to win in the fall."

Mike Wagner, associate professor in the School of Journalism and Mass Communication at the University of Wisconsin-Madison, said it is very unusual for a presidential frontrunner to be short on endorsements in any given state.

He thinks the lack of endorsements for Trump in Wisconsin could be chalked up to the state's ties to the "upper echelons" of national Republican politics, where the candidate isn't very popular.

"The fact that the (U.S.) speaker of the House is from Wisconsin, and the head of the Republic National Committee has deep Wisconsin ties, certainly suggests that Wisconsin lawmakers have a strong tie to the national party apparatus," Wagner said. "And I think a lot of people who have spent their lives in government as Republicans don't think Donald Trump is a real Republican."

"But I think more so it comes down to the fact that people see through the fact that Donald Trump really isn't the type of conservative that most people think this nation needs to move it forward," Stroebel said.

Many Republicans see Wisconsin as pivotal to a national strategy of denying Trump an outright victory ahead of this year’s convention.

Gov. Scott Walker, who has remained on the sidelines since his own presidential run, has hinted he may yet endorse Cruz.

Even so, Stroebel, Walker and many other Republicans have said they'll support whoever the GOP presidential nominee turns out to be.

Even if it's Donald Trump.