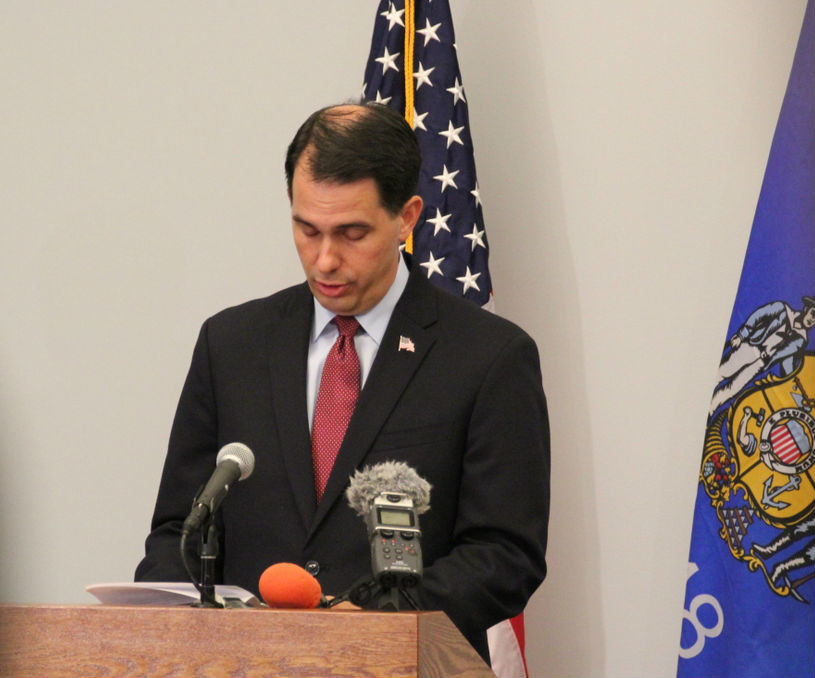 Media Reports Analyze, Evaluate Why Walker's Candidacy Faltered
Walker's Campaign Collapsed Not Because Of Trump, But Because Of Walker, Says Reporter

Little more than two months after officially announcing his candidacy for the Republican presidential nomination, Gov. Scott Walker said on Monday that he was suspending his campaign for the White House.

Walker ended his presidential campaign just 70 days after he formally entered the race, capping a remarkably short campaign for the governor that saw him plummet from frontrunner to also-ran.

Walker spoke to reporters in an otherwise empty ballroom at Madison's Edgewater hotel.  Behind him stood one U.S. flag and one Wisconsin flag and an empty beige wall.  While a handful of supporters watched from the sides of the room, Walker was alone at the lectern.  The governor began his remarks by talking as he often does about conservative icon and former President Ronald Reagan.

"As a kid, I was drawn to Ronald Reagan because he was a Republican and a conservative.  But most of all, I admired him because of his eternal optimism in the American people," he said.

Walker said sadly, the debate taking place in the Republican primary wasn't focused on that optimistic view of America and had instead drifted into personal attacks.  That's when Walker talked about his decision.

"(When) I was sitting in church yesterday, the pastor's words reminded me that the Bible is full of stories about people who are called to be leaders in unusual ways.  Today, I believe that I am being called to lead by helping to clear the field in this race, so that a positive conservative message can rise to the top of the field," he said.

Walker then went a step further, suggesting that other Republicans should follow his lead in the name of the party.

"I encourage other Republican presidential candidates to consider doing the same so that the voters can focus on a limited number of candidates who can offer a positive, conservative alternative to the current frontrunner," he said.

Walker never mentioned presidential contender Donald Trump by name in his remarks, but it was clear that he was speaking about the candidate who had surged in the polls as Walker had plummeted.

To say Walker's presidential campaign fizzled would be an understatement.  When Walker entered the presidential race in mid-July, he was considered a top-tier candidate nationally and the undisputed frontrunner in Iowa.  By last week, Walker was among the bottom dwellers.

He polled close to 0 percent in the last national poll.

Walker spoke for less than four minutes and left without taking questions.

"This is a difficult decision, as so many people have stepped up to support this campaign, he said, "You all have been my family to us."

The announcement comes after a precipitous decline in Walker's recent poll numbers and marks an unexpected turn of events for a candidate who rode an early surge of of support among Republicans in the spring, both in early primary states and nationwide surveys. A CNN poll from late last week put Walker's support among voters at less than 1 percent.

In recent weeks, Walker had been attempting to reboot his campaign with a turn toward more forceful rhetoric, including an anti-union speech at President Ronald Reagan's alma mater, along with a narrowed focus on the Iowa caucuses. But those changes weren't enough to overcome dwindling funds. According to the Times, Walker was scheduled to court donors in New York this week but the host was unable to secure RSVPs for the fundraiser.

Some of Walker's backers were also reportedly unhappy with his reluctance to shake up his campaign staff following a growing list of missteps, with focus resting especially on campaign manager Rick Wiley.

Onlookers, Analysts Reflect On What Went Awry For Walker's Campaign

A handful of protesters showed up to sing and write chalk messages on the streets outside the hotel.

Watching the commotion was nearby property owner Fred Mohs, a longtime GOP donor, who said Walker found out that it's hard to run for president as the governor of a small state.

"His fame on this one issue -- state employee unions -- wasn't enough to keep him going.  I mean, the depth of feeling on that isn't strong enough in the Republican Party to carry him all the way," he said.

Also outside Walker's announcement was John Nichols, the associate editor for the Capital Times newspaper and a political writer for The Nation magazine.  Nichols was surprised that Walker ended his campaign as quickly as he did.

"You know, this is epic stuff.  You flew as close to the sun as you could, and you found out maybe your wings weren't as strong as you thought," he said.

Nichols said that Walker's battle with public-sector unions opened the door for the governor to run for president, but he needed to do more to impress the GOP base.

"The problem was that after you've said that once as sort of a qualifying statement, people want to hear more.  They want to hear, 'OK, what do you propose?  What are you going to do?'  And there never, ever was a next paragraph. There never was a next statement.  And I think that very quickly that came to bite him," Nichols said.

As soon as Walker bowed out of the race, many of the remaining Republican candidates for president issued statements praising him.  Some started recruiting Walker's supporters.

Walker had planned a major presence in Iowa for the remainder of this year.  He suddenly has more time on his hands to spend in Wisconsin and more than three years remaining in his term.