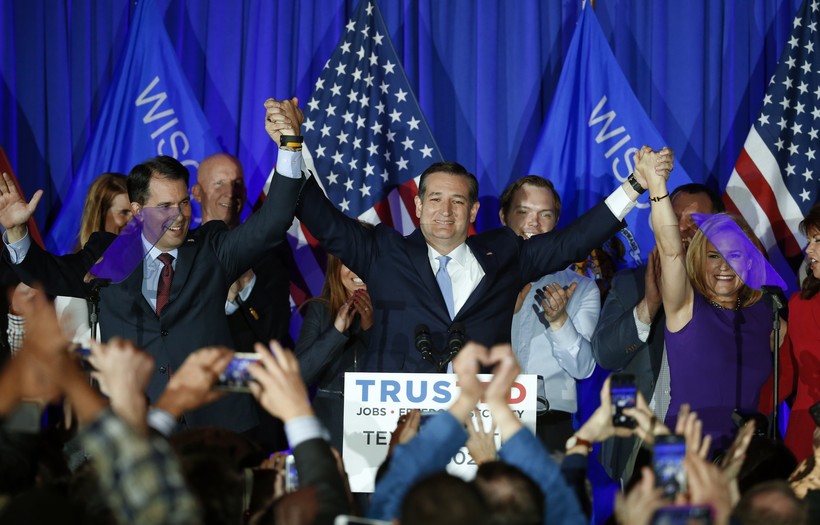 Cruz easily defeated GOP rivals Donald Trump and John Kasich.  He picked up nearly all 42 Wisconsin Republican delegates, and that triumph led to these first words of Cruz's victory speech in Milwaukee on Tuesday.

"God bless the great state of Wisconsin," he said.

The results represent a major victory for members of the GOP establishment who are seeking to stop frontrunner Donald Trump from steamrolling his way to the party's nomination in July. Some Republican opponents and Trump critics are trying to deny him the majority of delegates and force a contested convention in July.

Cruz, the U.S. senator from Texas, is casting his win in Wisconsin as a sign that he is the only candidate who can stop Trump. He's calling on Republicans to unify behind him and pushing Ohio Gov. John Kasich to drop out of the race.

In his victory speech, Cruz said his win is uniting the Republican Party and gives him a path forward to winning the nomination, either outright or at the convention this summer.

"Tonight, Wisconsin has lit a candle guiding the way forward. Tonight, we have hope for the future," he said.

Cruz is citing a string of recent victories and the backing of five former GOP presidential candidates as evidence that Republicans are getting behind his candidacy. He said his campaign raised $2 million on Tuesday alone.

"I am more and more convinced our campaign is going to earn the 1,237 delegates need to win," he said.

He said he is committed to capturing the nomination, perhaps even at the party's convention this summer.

"Either before Cleveland, or at the convention in Cleveland, together we will win a majority of the delegates and together, we will beat Hillary Clinton in November," he said.

Cruz was also looking ahead to November, saying he wants to deliver Wisconsin for Republicans for the first time in 32 years. Wisconsin hasn't voted for a Republican for president since Ronald Reagan in 1984.

But Cruz said he will be the first Republican since then to win Wisconsin and paint the Badger State "bright Republican red."

He ended his speech with a warning to Democratic frontrunner Clinton. Cruz said: "Hillary, get ready. Here we come."

Some Wisconsin Republicans Rallied Against Trump

Unlike some other Great Lakes states where Trump scored easy wins, he came to campaign in Wisconsin facing opposition from the state's entrenched Republican leadership. Conservative talk radio hosts in reliably Republican parts of the state have been lambasting the New York billionaire for months, U.S. House Speaker Paul Ryan has publicly criticized Trump on multiple occasions, and last week Gov. Scott Walker, whose own White House ambitions were dashed early on in the campaign, came out with a strong endorsement for Cruz.

In the days leading up to the Wisconsin primary, polling numbers didn't look encouraging for Trump. Results from the latest Marquette University Law School Poll showed Trump, the one-time favorite, trailing Cruz by 10 points, 40 percent to 30. That's in contrast to the previous poll that had Trump enjoying a large lead (albeit with the field split more ways) at 30 percent against Cruz's 19 percent. Kasich meanwhile jumped from 8 percent support in February to 21 percent in March.

Cruz is winning at least 24 delegates, with 18 left to be allocated. Trump still has a narrow path to claim the nomination by the end of the primaries on June 7. But by losing Wisconsin, Trump's path gets even narrower.

Currently, Trump has 737 delegates while Cruz has 505. Kasich has 143. A candidate needs to win 1,237 delegates to claim the nomination.

Trump is the favorite in the next primary on April 19 in his home state of New York. He remains the only Republican who can clinch enough delegates to capture the nomination before the party convention.

Both Cruz and Democratic presidential underdog Bernie Sanders were hoping for victories that will give them a wave of fresh momentum in their efforts to capture the White House. Sanders' poll numbers in Wisconsin had him with a slight lead over frontrunner Hillary Clinton.