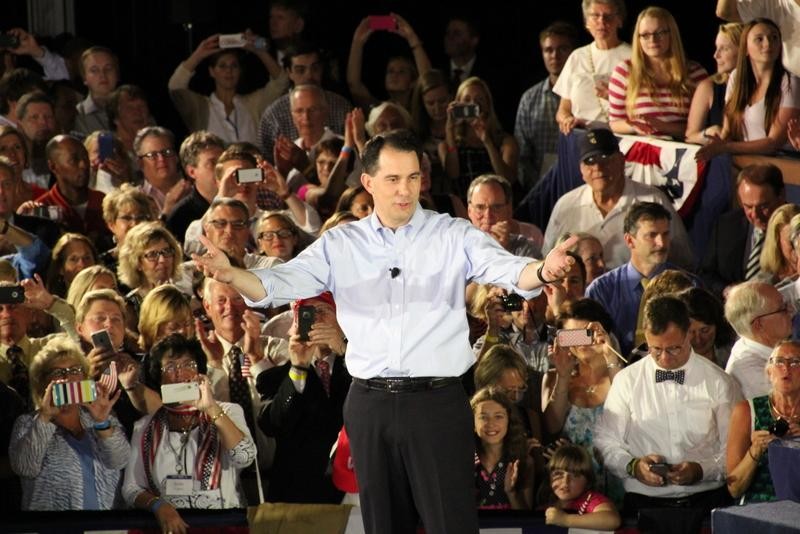 Gov. Scott Walker vowed to fight for America's interests abroad and for his conservative policies in Washington, D.C., in his announcement on Monday afternoon that he was seeking the Republican nomination for president.

The governor launched his 2016 Republican presidential bid by highlighting his clashes with labor unions as his campaign taunted his Democratic critics. The 47-year-old Walker embraced his "fighter" reputation as he formally declared his candidacy in Waukesha with his family at his side.

"We are running to serve as your president of the United States of America," Walker told the cheering crowd.

As expected, Walker highlighted his collective bargaining law and his recall election victory, telling the crowd that he "took on the unions and won."

Walker began his speech by reminding supporters that he took on organized labor and won.  He ended it by saying Americans deserved someone who'd fight for them, making an appeal to social conservatives in the process.

"Healthy or sick, born or unborn, I will fight and win for you," he said.

The governor also talked about his tax cuts, his defunding of Planned Parenthood, his signing of concealed carry and voter ID laws and his budget plan to require drug tests for some recipients of public benefits. All of this, Walker told the crowd, took place in the "blue state" of Wisconsin.

"My record shows that I know how to fight and win.  Now more than ever, America needs a president who will fight and win for America," he said.

Walker said if elected president, Walker promised to work quickly to undo many of President Barack Obama's priorities. He said he'd immediately call on Congress to repeal the Affordable Care Act and block any nuclear deal reached with Iran. He also said he'd give states more power to make their own decisions when it comes to Medicaid, transportation and education. He also said he would approve the Keystone Pipeline.

Wisconsin featured prominently in his speech. Walker told supporters that if elected, he would lower the burden on taxpayers.

Walker becomes the 15th high-profile Republican to enter the GOP presidential contest, but claims to occupy a unique space in the congested field. Walker said he not only fights for conservative principles, but also wins elections and policy debates in a state that typically supports Democrats.

Natalie Perleberg, 18, of New Berlin, was one of the early arrivals to the event. She said she likes the way Walker moved to restrict public unions, as well as how he handled himself in winning the 2012 recall election that followed.

More than 200 protesters rallied on a roadside outside the convention center. The group, who gathered for about 30 minutes in the hot afternoon sun, included blacks and Latinos as well as current and retired educators. The main theme among the critics was that Scott Walker has divided Wisconsin, and they say they don't want him dividing the nation.

Mary Mezera, a 46-year-old education research coordinator, was among the protesters. She said Walker took away her union representation and she hopes he falls "flat on his face" in the presidential race.

Earlier on Monday, Walker released a video that about what he said are his "big, bold ideas from outside Washington," a likely reference to his efforts to weaken unions through a state law that strips them of bargaining rights. The governor talked about "fresh leadership" and promotes himself as a "reformer, fighter and winner."

He also tweeted early Monday "I'm in," foreshadowing the announcement he made official later in the day.

As Walker officially announced his presidential campaign, Democratic National Committee members criticized the governor for what they said are an unpromising economic record and a divisive leadership approach.
R.T. Rybak, the DNC's vice chair, said instead of moving forward and united, Wisconsin under Walker has become "one of the most divided states in the country."
"And I suppose if a restaurant had about half of the customers saying they got a good meal and about half saying they got food poisoning, I guess they can call them a good success. But politically, that is not the way to run a state," he said.
Rybak also said Walker has flip-flopped on issues including same-sex marriage, abortion and immigration reform, saying different things in different states as he enters the 2016 presidential race.

Editor's note: This story has been updated to include additional reporting from Chuck Quirmbach.