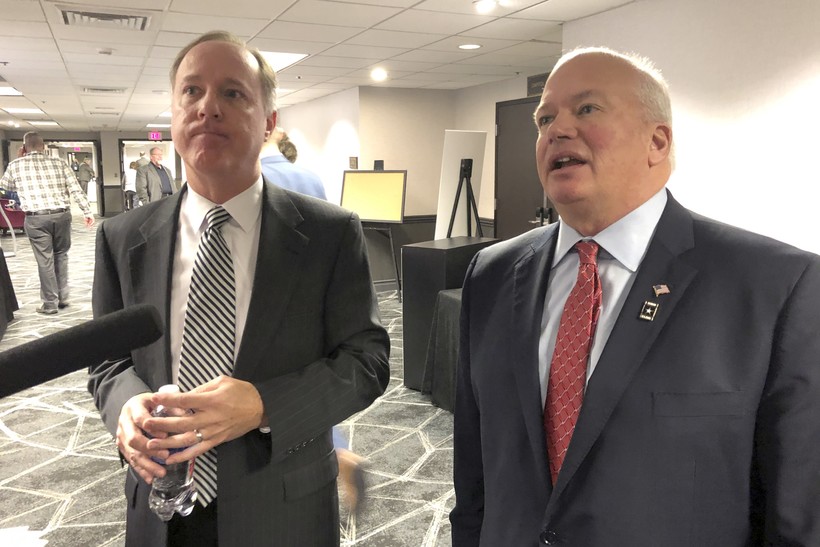 A Bill That Would Change Rules On Livestock Siting Is Also Dead For The Year
By Shawn Johnson
Share:

Fitzgerald discussed both bills with reporters following one of the Senate's final session days of the year as GOP lawmakers in both houses of the Legislature work to wrap up their business for 2020. The Assembly is holding what leaders there have said will be its final regular session day Thursday.

But other proposals could still pass when the Senate reconvenes for its final session day in March, and Fitzgerald said a bill to extend bar hours during the Democratic National Convention in Milwaukee this summer still has a chance at becoming law.

Both the Assembly and Senate passed bills that would set stricter state timelines for processing sexual assault kits in Wisconsin, but because the measures are different, it appears neither plan will make it to the governor's desk.

A bipartisan group of lawmakers and Democratic Attorney General Josh Kaul introduced the first bill last April. It passed the Senate on a voice vote in October.

While groups that represent victims of sexual assault were pushing for its passage, Assembly Republicans passed a competing plan that would also require police to report accused assailants who are in the country illegally to U.S. Immigration and Customs Enforcement (ICE). In addition, the Assembly GOP bill would let victims of sexual assault join the state’s private school voucher program, regardless of the student’s previous eligibility for the program.

"You know, I asked the Speaker (Robin Vos) to go back and just reconsider the bill as passed by the Senate," Fitzgerald told reporters Thursday. "He felt strong that these other provisions needed to be added."

"I don't have the support for taking up the bill with those amendments in them as we sit here today, so I can't tell you that the Senate would take that bill up," Fitzgerald said.

Kaul said that the blame for the impasse rested squarely with Assembly Republicans.

"What's happened is that Assembly Republicans have decided to prioritize political point-counting over the best interests of public safety and survivors of sexual assault," Kaul said. "We'll have gone another legislative session without getting reform passed. I hope Assembly Republicans reconsider."

When the Assembly bill passed, Assembly Republicans argued it was favorable to the Senate plan because it was more comprehensive.

Another bill that would give agricultural groups more control over the rules for siting large livestock farms is dead for the year, according to Fitzgerald.

The plan would also shift more of the responsibility for overseeing livestock farm siting to the state Department of Agriculture, Trade and Consumer Protection.

Critics argued the measure would erode local control over decisions that affect all residents, not just the farmers who want to build a large livestock farm.

The plan was scheduled for a vote before the Senate Wednesday, but Fitzgerald abruptly pulled it from the agenda. He told reporters Thursday that GOP lawmakers and farm groups who had been negotiating the plan were uncomfortable over which units of government would have control over the process.

"I did not have full support for that bill," Fitzgerald said. "I don't see it coming back at this point."

Fitzgerald was less sure of what might happen with a bill that would extend Wisconsin's closing time for bars and restaurants from 2 a.m. until 4 a.m. during the week that the Democratic National Convention is in Milwaukee.

The Assembly is poised to pass a bill to extend the bar hours on Thursday. It would apply statewide during the week of the Democratic National Convention from July 13 through July 17.

Democrats tried to force a vote on that plan Wednesday, but Republicans blocked it, with state Sen. Van Wanggaard, R-Racine, calling the move "unconscionable" because it will lead to more people drunken driving.

Fitzgerald indicated that other Republicans also oppose the plan, but he wasn't sure how many.

"I don't know exactly what that number is," Fitzgerald said. "It just seemed to have continued to grow."

Democrats have said it's important to extend bar hours because the tens of thousands of people who visit Wisconsin for the DNC will be leaving the convention very late and may not have time to visit Wisconsin restaurants and taverns unless the closing time is moved. The Wisconsin Restaurant Association and the Tavern League of Wisconsin are among the business groups pushing it.

Typically, Republicans don't let bills come up for a vote in the Senate without a majority of GOP Senators in support, but on rare occasions, they'll pass bills with the help of Democrats.

Fitzgerald didn't rule that out with the bill to extend bar hours.

"Maybe we can work with the minority," Fitzgerald said.