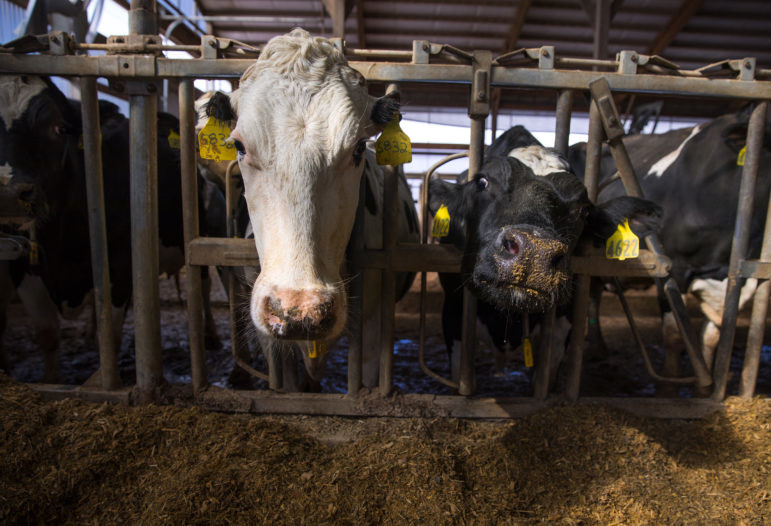 Plan Would Also Put Livestock Siting Decisions In The Hands Of The State
By Shawn Johnson
Share:

Republican lawmakers are making a last-minute push to change the rules for siting the state's largest livestock farms, giving state government more control over the process and granting agriculture groups considerably more power over changing the standards in the future.

Current standards were written into law in 2006 and have remained unchanged ever since. While the new bill wouldn't initially make major adjustments to current standards, future changes would have to be approved or rejected by a panel of nine stakeholders, five of whom would be chosen from farm groups.

Rep. Travis Tranel, R-Cuba City, one of the sponsors of the plan, said it would give farmers the confidence they need to get bigger in an agriculture economy that increasingly demands it.

"The way that farming is working is farmers are continually having to get bigger and consolidate, not because they want to, but in order to compete," Tranel said. "I'm not necessarily saying that I like that, but that is the reality."

The bill would streamline the process for approving or denying permits for livestock facilities.

It would also take the decision out of the hands of local governments that have adopted the state's livestock siting standards and put them in the hands of the Department of Agriculture Trade and Consumer Protections instead.

Should DATCP write rules that change those standards in the future, they would be subject to review by a new "Livestock Facility Technical Review Board."

Tranel also said the decision to fill the board with members of farm groups was deliberate.

"I definitely think it's more appropriate to make sure that those groups have a seat at the table as opposed to people from our more urban areas trying to tell those of us from rural areas what we should and shouldn't do," Tranel said.

While critics called that change an assault on local control, local government groups like the Wisconsin Towns Association support it.

"It shifts what are state rules, state responsibilities, back to where we believe they belong," said Wisconsin Towns Association President Mike Koles. "The state."

It's unclear whether Gov. Tony Evers' administration agrees with the plan, which would need Evers' support to become law.

A representative from DATCP told a joint hearing of the Legislature's agriculture committees that agriculture represents a relatively small portion of the agency's duties, but DATCP was being asked to take on considerably more work under this bill.

"We do not have the position and work power required to begin to administer this program," said Angela James, assistant deputy secretary at DATCP.

James said it could also make it difficult if not impossible for the state to write new rules involving livestock siting standards.

Democrats said they were not included when the bill was drafted and were concerned the bill was giving too much say to farm groups.

"We need to be considering everybody," said Rep. Dave Considine, D-Baraboo.

While backers of the bill said they'd been working on it for months, it was not formally introduced to the public until Tuesday.

The state Assembly has said it plans to hold its final session day of the year on Feb. 20, while the Senate plans to adjourn in March.