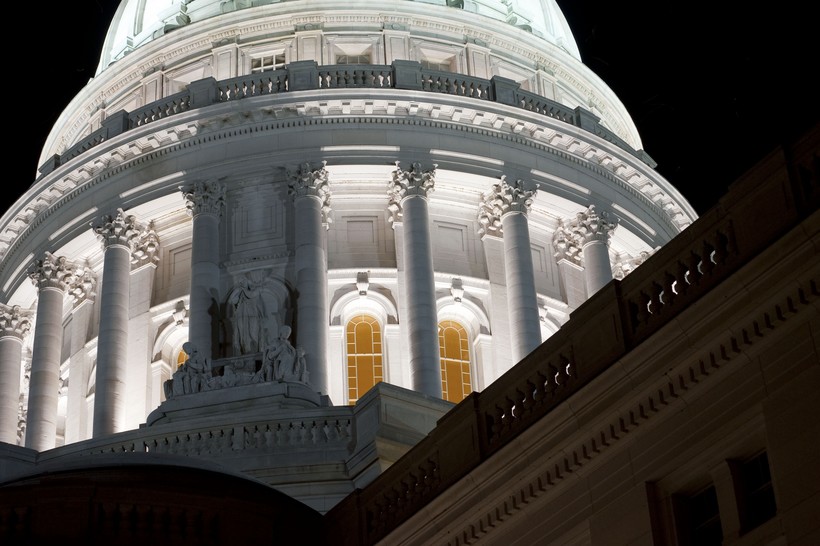 Republicans Move Ahead With 'Tougher On Crime' Bills, Delay Vote On Tax Cut

Republicans state senators forged ahead Wednesday with a tax cut and a package of "tougher on crime" bills against the wishes of Democratic Gov. Tony Evers, while casting doubt on a plan to extend bar hours when the Democratic National Convention is in Milwaukee.

Democratic senators used a procedural move to delay a final vote on the tax cut bill until Thursday morning, but Republicans showed no sign that they would relent on the plan. It would use a projected budget windfall on an income and property tax cut, with the total package costing the state roughly $392 million in the current budget.

Senators also sent several crime bills to Evers' desk despite a warning from his administration that the measures would put so many people behind bars that it would require the state to build two additional prisons.

But the Senate delayed action — without explanation — on a bill that would give agricultural groups more oversight when it comes to siting large livestock farms in Wisconsin.

Republicans plan to reconvene the state Senate early Thursday morning to pass their tax cut proposal, which was first unveiled Friday and passed by the Legislature's budget committee Monday.

Evers, who has said he wants to use the state's projected budget surplus on school funding instead, has not yet said whether he will sign or veto the GOP tax cut.

Senate Majority Leader Scott Fitzgerald, R-Juneau, said he talked to Evers about the tax cut and urged him to support it.

"He said he would consider it," Fitzgerald said.

But Britt Cudaback, Evers' deputy communications director, suggested on Twitter there was more to the story.

"The governor told @SenFitzgerald he’ll be as open to Republicans’ tax bill as Republicans have been about passing his education plan," Cudaback tweeted Wednesday.

Fitzgerald and other Republicans have said they won't pass Evers' school funding bill.

While it's not officially dead, comments from key GOP senators Wednesday cast doubt on a bill that would extend bar hours until 4 a.m. during the week the DNC is in Milwaukee.

Fitzgerald told reporters Wednesday the plan was losing momentum in the Senate, which plans to hold its final session day of the year in March.

Democratic senators tried to force a vote on the plan, introducing it as an amendment to another bill involving economic development.

Sen. Jon Erpenbach, D-West Point, said there was nothing wrong with extending closing time from 2 a.m. until 4 a.m., telling his GOP colleagues they'd have no problem extending bar hours if the Republican National Convention were coming to Wisconsin.

"Conventions throughout the evening can last a long time," Erpenbach said. "You want to know that the bar is going to be open when you get there."

Sen. Chris Larson, D-Milwaukee, said it was a chance for Republicans and Democrats to work together.

"If there is anything that should be bipartisan, it should be our culture of having a drink and talking about politics," Larson said.

But Sen. Van Wanggaard, R-Racine, a retired police officer, called the effort "unconscionable" given the high number of drunken-driving accidents that occur in Wisconsin. Wanggaard said he would not support any bill that lets people drink later at bars and restaurants.

And Sen. Dale Kooyenga, R-Brookfield, suggested people who attend the DNC could still drink at breweries, which face no mandated closing hour under Wisconsin law.

"This is not a priority," Kooyenga said. "We as a state will survive."

The Assembly has scheduled a vote on the plan for Thursday. If it passes, that bill could still come back to the Senate when it reconvenes next month. The plan has bipartisan support in the Assembly, where it's being sponsored by Rep. Rob Swearingen, R-Rhinelander.

The livestock siting bill, which was also introduced last week, would give agriculture groups more control over future rule changes involving large livestock farms, or those farms that have 500 or more "animal units."

It would also shift decisions over siting those farms from local governments to the state Department of Agriculture, Trade and Consumer Protection.

While the plan was scheduled for a vote Wednesday before the full Senate, Fitzgerald unexpectedly referred it back to the Committee on Senate Organization, a panel of legislative leaders that oversees the Senate's agenda.

That sometimes means a bill lacks the votes to pass the Senate, but Fitzgerald's office did not respond to a question about whether the livestock siting bill was dead for the year.

The bills include one that would require the state to recommend revoking someone's parole or probation if they are charged with a crime while they're under supervision. The state Department of Corrections has estimated the plan would dramatically increase the state's prison population, requiring the construction of two additional prisons at an ongoing cost of $156 million per year. Because Senate Republicans amended the plan, it heads back to the Assembly.

Republican state senators also passed a plan that would increase penalties for carjacking and reckless driving. That bill has yet to be taken up by the Assembly.

In other action Wednesday, senators voted to ratify a new contract for Wisconsin state troopers that would increase their starting salaries by nearly $6,000 per year. The troopers' last contract expired in 2015.

Senate confirmation of Evers cabinet secretaries has hardly been a given, with senators taking the rare step last year of firing former DATCP Secretary Brad Pfaff.