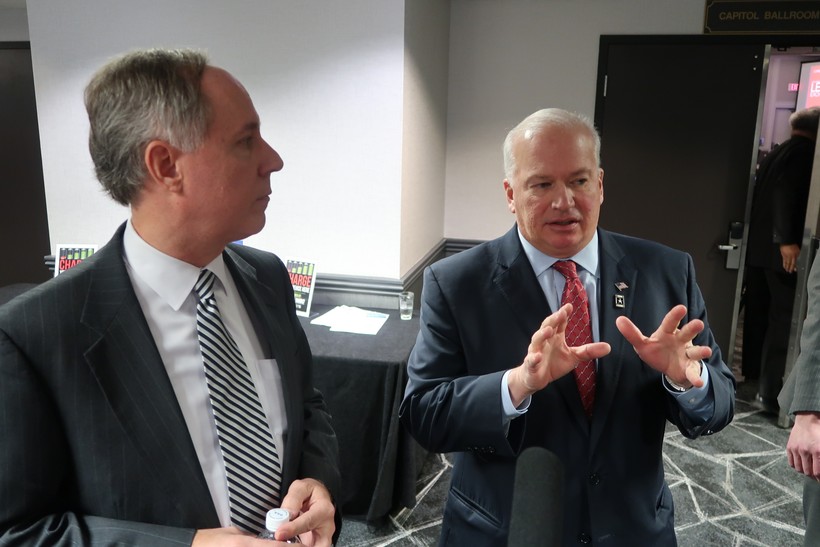 The Legislature's top Republicans say they may yet pass a bill to extend bar hours during the Democratic National Convention in Milwaukee, but a provision that would regulate wedding barns could make it a tougher sell with time running out this legislative session.

Right now, state law requires bars to close at 2 a.m. on weekdays and 2:30 a.m. Saturdays and Sundays. GOP lawmakers began circulating a bill Wednesday afternoon that would extend closing time to 4 a.m. from July 13 to July 17 over a block of 14 counties in southeast Wisconsin.

It's being pushed by the Wisconsin Restaurant Association, the Tavern League of Wisconsin and other business groups with ties to the alcohol industry.

But in order to become law before tens of thousands of Democrats descend on Wisconsin this summer, it will need the support of the state Legislature, which is dominated by Republicans.

"This is not about whether it's Democrats or Republicans," said Wisconsin Restaurant Association President and CEO Kristine Hillmer. "We would be making this same argument if it was the (Republican National Convention)."

Hillmer said what's driving the bill is a push to help local businesses benefit from the 50,000 people DNC organizers estimate will visit Wisconsin for the convention.

Because convention floor sessions are expected to go late in order to maximize the prime time television viewing audience, Hillmer said tourists won't have much time to visit nearby establishments if they keep their usual closing hours.

"You do need some more flexible rules to accommodate things," Hintz said. "And I think if we're going to make sure that the businesses who have an opportunity to do really well but also have to absorb all of the chaos of having half a million people come, the goal should be to do something that rhetorically Democrats and Republicans have supported."

"I hope we will see that," Vos told reporters in Madison. "I can't imagine why we wouldn't."

"I certainly haven't said no to anything," said Fitzgerald. "And I don't have members lobbying me to tell me that they won't support anything. So we'll see where we end up."

The Wisconsin Restaurant Association began pushing for the change last year, shortly after Milwaukee was chosen to host the DNC.

But like many proposed changes to alcohol laws in Wisconsin, the bill circulated Wednesday is far from a straightforward change to closing hours, and instead seeks to reopen a thorny debate over how the state regulates wedding barns among other proposals.

More and more rural landowners have started to use so-called wedding barns and other buildings to host wedding ceremonies and receptions, where people are served alcohol. The Tavern League wants these venues to be regulated like traditional bars and restaurants, whose owners pay for licenses and face stricter regulation.

The bill authored by Rep. Rob Swearingen, R-Rhinelander, a former president of the Tavern League, would establish new "private event venue permits" that lets people "possess and consume" beer and alcohol. The two-year fees would cost $2,000.

The bill would also expressly permit the sale of alcohol at Road America, a racetrack near Elkhart Lake. In addition, it would establish that alcohol sales are legal at State Fair Park.

Perhaps notably, the bill circulated Wednesday did not include any Senate co-authors, and it's unclear how conservatives there will view the effort.

Asked about the plan, Sen. Duey Stroebel, R-Saukville, indicated he had some concerns.

"While clarifying the alcohol permits for State Fair and Road America is good policy, the creation of a new $1,000-a-year fee for wedding barns is an abrupt departure from the policies set by both the Evers and Walker administrations," said Stroebel in a written statement.

Hintz said if Republicans really want the bar hours bill to pass, they should push it as a standalone bill, not a catch-all proposal.

"Let's do a clean bill, address what needs to be done before session ends," Hintz said.

Hillmer said the trouble with passing a standalone bill is it would have trouble passing this late in the session.

"Just being pragmatic, we have to work with others," Hillmer said. "It's pretty much the nature of what happens in Madison."

While the DNC won't gavel in until July 13, time may be running out to get something done.

Kit Beyer, a spokesperson for Vos, said the Assembly's final session day of 2020 will be Thursday, Feb. 20.

And Fitzgerald has said previously the Senate will meet twice more before the end of the year, once in February, once in March.

Fitzgerald pushed his own rewrite of alcohol laws in the waning days of session a couple years ago, but the effort went nowhere.

Hillmer acknowledged it will be a challenge getting the bill passed before the Legislature adjourns.

"I'm cautiously optimistic," she said in an interview Wednesday. "But I wouldn't bet quite yet that we are at the finish line."