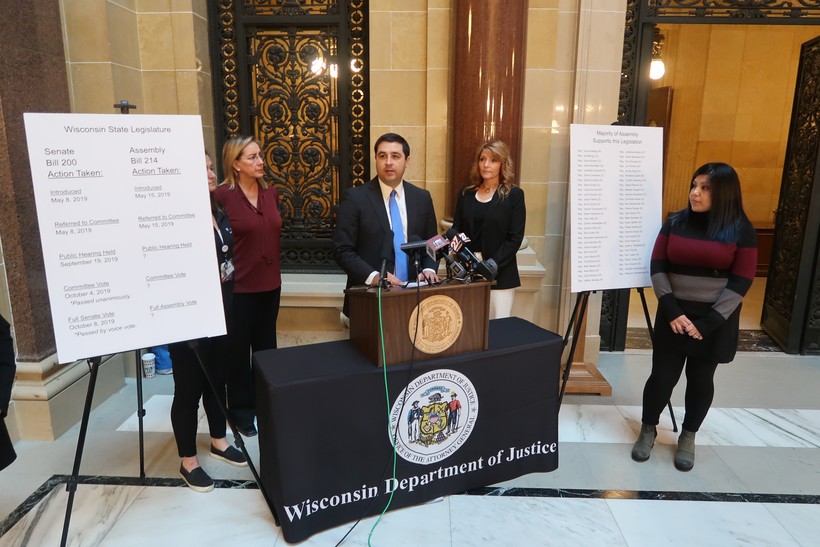 Wisconsin Attorney General Josh Kaul is pressuring a suburban GOP lawmaker to move forward with a bill that would standardize the process for collecting sexual assault kits.

Kaul, a Democrat, held a state Capitol press conference Tuesday to call on Rep. Joe Sanfelippo, R-New Berlin, to hold a hearing on the bill in the Assembly Committee on Health, which he chairs.

Kaul, who was flanked by advocates for sexual assault survivors, said he was concerned the bill might not pass before lawmakers adjourn their session early next year.

"I have talked to a number of legislators about this, including 14 out of 15 members of the Assembly Health Committee," Kaul said. "I have yet to hear from a single member of the Legislature who opposes this legislation."

Sanfelippo did not return a call or email seeking a response to the attorney general's comments.

The bill in question would create a standard procedure for collecting DNA evidence in sexual assault cases in Wisconsin, with the hope being that this could prevent a backlog of sexual assault kits in the future.

Roughly 6,000 untested sexual assault kits were discovered in 2014, a backlog that was eliminated four years later. Once those kits were tested, they led to the arrest of nine people earlier this year.

Under a bill Kaul and lawmakers from both parties introduced in April, sexual assault victims would have the option of whether to send a sexual kit to the state crime lab for DNA analysis.

Joining Kaul at the Tuesday press conference was Jacqueline Jaske, who was raped 25 years ago. Jaske said DNA evidence led to the arrest and imprisonment of her attacker.

"This works," Jaske said. "DNA evidence works. And it shouldn't be put on a shelf."

A similar bill passed a state Senate committee unanimously and passed the full Senate on a voice vote in October.

More than half of all state representatives have signed on as co-authors of the bill in the Assembly, and the lead author is a Republican, Rep. Dave Steffen of Green Bay.

Kaul said he last spoke to Sanfelippo about the bill a couple months ago. At the time, he said Sanfelippo said he had yet to review the bill.

While the Legislature has yet to set a firm end date for the two-year session that runs through next year, it's become the norm for state lawmakers to adjourn in February or March.

The Legislature is not scheduled to meet again in the 2019 calendar year.