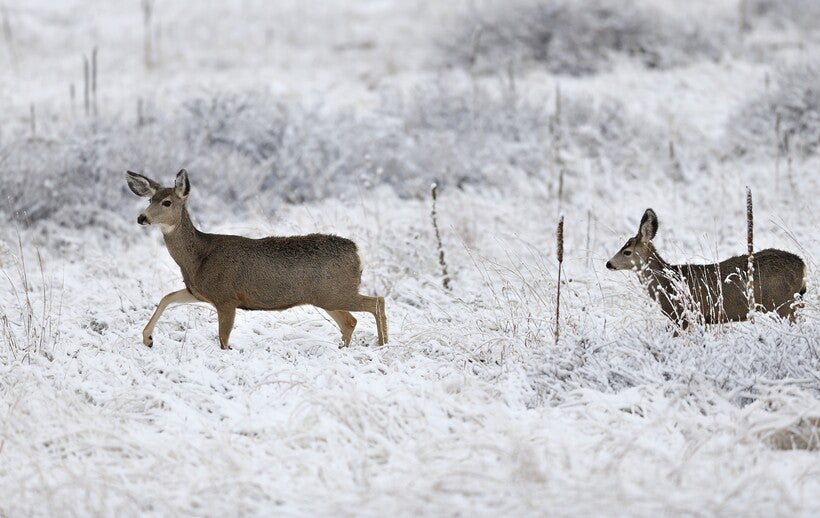 In this Nov. 17, 2015, photo, deer forage after a night of fresh snowfall, in Boulder, Colo. Brennan Linsley/AP Photo

There will be a lot less venison in Wisconsin’s freezers this winter after heavy snowfall disrupted the nine-day gun deer hunting season.

Hunters registered 160,769 deer in all, according to figures posted Tuesday morning by the state Department of Natural Resources. That's a decline of 24.9 percent from last year’s total of 213,972. The season started Saturday, Nov. 23 and ended Sunday.

The DNR attributes the decline to several factors. One was the season's late start. State law starts the season on the Saturday before Thanksgiving, and this year's Thanksgiving fell late in November. That means deer were not as active as they are earlier in their rutting season. Another factor was an unusual amount of unharvested corn for this time of year, which gave deer perhaps 2 million acres of habitat across the state to hide in.

But the biggest factor by far was Mother Nature.

Northwoods Wisconsin saw two major snowstorms during the hunting season, and the rest of the state got rain and winds. More than a foot of snow fell on parts of northern Wisconsin on the day before Thanksgiving. On Sunday, the last day of the season, record-breaking snowfalls shut down areas bordering Lake Superior. Other parts of the state saw less intense snow that day but still got as much as 6 to 8 inches in central and northern Wisconsin.

All this likely meant fewer hunters made it to their stands, and it definitely meant fewer of them ended the season with a deer. The steepest drop-off in harvest figures came in the state’s Northern Forest region, which includes much of the Northwoods. It saw 38.2 percent fewer deer harvested this year.

"I talked to people who, because the roads weren't plowed, couldn't even get into their deer camps anymore," Wallenfang said. "A lot of folks pulled out on Monday afternoon to try to beat that storm home when they were hunting in the north. I heard that from several folks — and I'm one of them."

Wallenfang noted that participation in other forms of deer hunting including archery and crossbow hunting have increased in recent years, which means some hunters will have more opportunities to get out in the woods in 2019.

See the DNR's preliminary season totals broken down by region and county here.