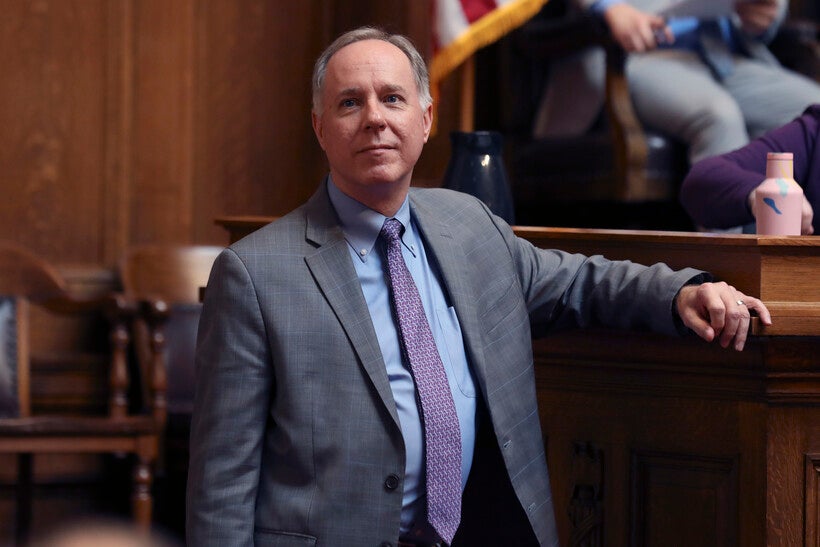 Wisconsin Assembly Speaker Robin Vos, R-Rochester, has been mum on the Republican majority’s plans for legislation if the U.S. Supreme Court overturns Roe v. Wade, which established a constitutional right to an abortion. He is seen at the Wisconsin State Capitol in 2020 in Madison, Wis. Coburn Dukehart/Wisconsin Watch

Republicans push for 'universal school choice' ahead of next budget debate

In the days since the November election, Republican Assembly Speaker Robin Vos has indicated he wants to see "universal school choice" become law in Wisconsin.

But what that means — and how it might happen — remains unclear less than a year after Democratic Gov. Tony Evers vetoed a bill that would have dramatically expanded school choice, and less than a month after Evers won reelection.

Vos, whose GOP colleagues selected him to preside over a 64-35 Republican majority in the Assembly, has suggested he wants Evers to sign a "universal school choice" proposal as a condition of increasing public school funding in the next state budget. Wisconsin is projected to begin the next two-year budget cycle with a record $6.6 billion in its general fund, and Evers has endorsed an education budget that would increase school funding by more than $2 billion.

"Look, I am willing to go to our caucus and advocate for more money for public schools. I think that's good for our state," Vos said recently at a WisPolitics forum in Madison. "I think school choice is good for our state. It's kind of settled law. That doesn't seem to me to be an outrageous position."

School choice began in Milwaukee in 1990 as a way for families who were living in poverty to send their kids to private schools. Initially, a family had to earn less than 175 percent of the federal poverty level to qualify, and participation in the program was limited to 1 percent of all kids enrolled in the Milwaukee Public Schools system.

While Vos has indicated that he still has no set definition of what "universal school choice" should be, he has said he wants to open school choice to all families, regardless of how much they earn.

GOP lawmakers passed a version of a "universal school choice" bill earlier this year that Evers vetoed. That plan would have gotten rid of limits on family income for the choice program and reimbursed participating students for up to $1,000 in costs for the 2022-23 school year.

A fiscal estimate from the Department of Public Instruction found the proposal could increase local property taxes by as much as $577 million in the 2022-23 school year. Evers cited that property tax increase in his veto message.

Dan Rossmiller with the Wisconsin Association of School Boards said that increase in property taxes is a huge concern, especially in districts that he believes have been underfunded for more than a decade. He said the idea of universal school choice also runs contrary to the original idea of the voucher school system.

"The initial thought behind the voucher program was that it was intended to enable students who otherwise couldn't afford options to have options available to them," Rossmiller said. "But when you start raising those limits, if you're going to subsidize everybody ... you're giving subsidies to wealthier and wealthier people."

Vos also floated the idea of expanding the state's open enrollment program, where parents can apply for their kids to attend a public school district other than the one in which they live. Under current law, both the nonresident and resident school districts have the power to deny the applications under limited circumstances.

Rossmiller said that in practice, denials are rare, but he said there would be a downside to taking that power away from public schools.

"The principal limitation is one of space," Rossmiller said. "It may be difficult to explain to your taxpayers why you are admitting students from another district and not maintaining the student-teacher ratio that you believe is optimal for your own resident district students to learn."

Evers said recently that he wanted to see the details on any choice expansion, but that he was skeptical it could work if the state wants to fully fund public schools.

Evers defeated Republican challenger Tim Michels earlier this month. Michels made "universal school choice" one of the key platforms of his campaign.

Earlier this year, Evers vetoed a bill that would have established "universal school choice" in Wisconsin. In his veto message, the governor wrote about concerns that the plan could increase local property taxes.

"It is remarkable to me that many supporters of this bill, who commonly express concerns about property taxes when it comes to supporting more than 800,000 public school children in our state, are apparently unfazed by the fiscal impact this bill could have on families due to the way these programs are funded," Evers wrote at the time.

While Vos has been the most outspoken about expanding school choice since the election, it's unclear how other GOP lawmakers might view the issue. At the same WisPolitics forum, Republican Senate Majority Leader Devin LeMahieu of Oostburg said he agreed with the concept of expanding school choice but was flexible on the details.

"If we're negotiating on this, you know, moving the football is also an option," LeMahieu said. "Maybe we don't get all the way to universal school choice, whatever that means and however much that costs."