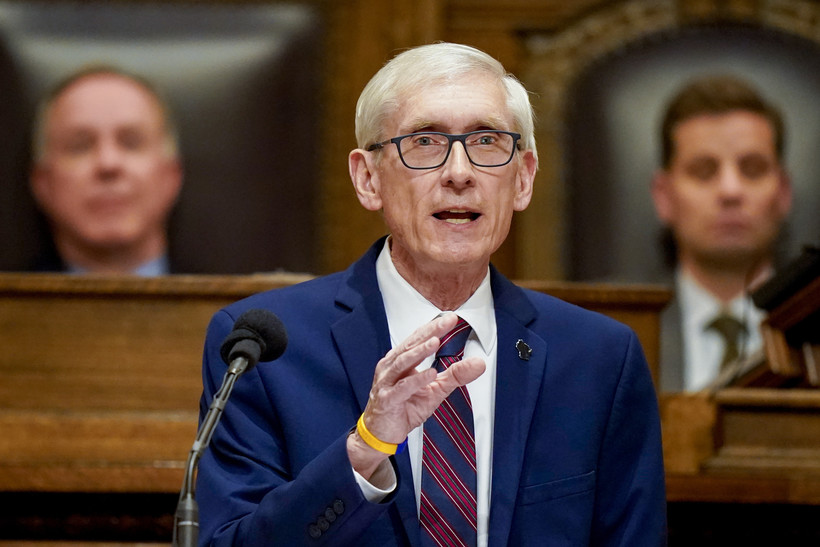 Gov. Tony Evers addresses a joint session of the Legislature in the Assembly chambers during the governor's State of the State speech at the state Capitol on Tuesday, Feb. 15, 2022, in Madison. On Friday, April 15, 2022, Evers vetoed 28 Republican bills that would have dissolved the Milwaukee school district, prevented certain COVID-19 vaccine mandates and made it more difficult to obtain unemployment benefits. Andy Manis/AP File Photo

Evers has vetoed a record 126 bills this legislative session
By Shawn Johnson
Share:

The vetoes come a week after Evers vetoed 43 GOP bills, capping off a contentious legislative session with Republicans ahead of Evers' reelection campaign this year. Evers has vetoed a total of 126 bills this two-year session, which is more than in any other session in Wisconsin history according to the nonpartisan Legislative Reference Bureau.

Here's a rundown of some of the governor's actions Friday.

As expected, Evers vetoed a package of education bills that would have dramatically changed the state's education system, especially in Milwaukee.

One of the plans would have completely eliminated the income caps at private voucher schools. Some form of income limits have been in place for Wisconsin's voucher school programs ever since their inception.

Under the bill Evers vetoed, Wisconsin's wealthiest families would also have access to voucher schools. The bill also would have reimbursed students for up to $1,000 in costs for the 2022-23 school year.

"It is remarkable to me that many supporters of this bill, who commonly express concerns about property taxes when it comes to supporting more than 800,000 public school children in our state, are apparently unfazed by the fiscal impact this bill could have on families due to the way these programs are funded," Evers said in his veto message.

The same plan would have lifted enrollment caps in the statewide voucher program.

One of Evers' GOP rivals in the race for governor, former Lt. Gov. Rebecca Kleefisch, issued a statement attacking Evers' for vetoing the voucher schools bill.

"Tony Evers’ vetoes make it clear that he thinks education bureaucrats should have more of a say in a child’s education than their own parents," Kleefisch said.

Evers also vetoed a bill that would have broken up the Milwaukee Public School District and replaced it with smaller districts. The governor said he objected to dissolving MPS without evidence that it would help kids in Milwaukee.

In addition, Evers vetoed a plan that supporters called a parental "bill of rights," which would have given parents the power to review instructional materials for their kids and decide what name and pronouns they're allowed to use at school.

"I am vetoing this bill in its entirety because I object to sowing division in our schools, which only hurts our kids," Evers wrote.

Evers also vetoed a bill that would have banned teaching about systemic racism in Wisconsin schools.