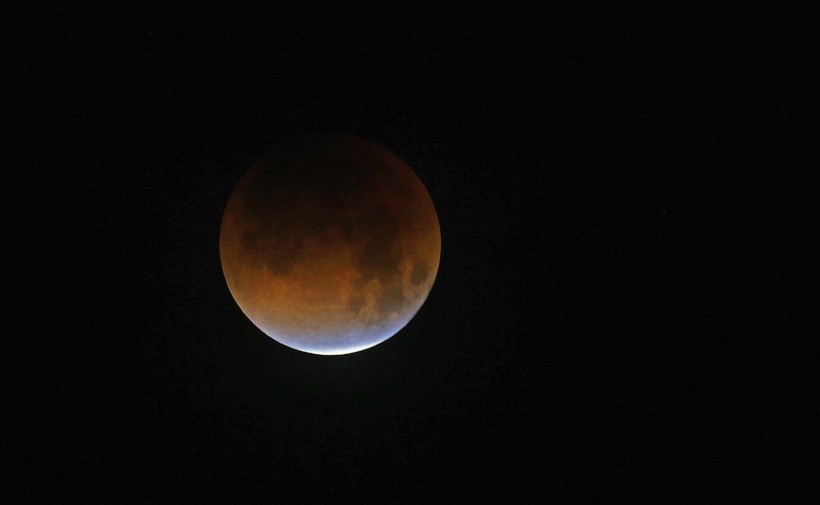 The moon passes into the earth's shadow during a lunar eclipse as a super blue blood moon and a lunar eclipse shows up in the sky in Phoenix, Wednesday, Jan. 31, 2018. In a rare lunar occurrence, a blue moon has synced up with a super moon and a total lunar eclipse. Ross D. Franklin/AP Photo

A total lunar eclipse will be visible on Sunday night across much of the globe, including Wisconsin.

Brian Welsch, an associate professor of physics at the University of Wisconsin-Green Bay, told the Appleton Post-Crescent that total lunar eclipses happen fairly often, but the added factors of a "super flower blood moon" makes this instance all the more spectacular.

If you're wondering what all those words mean, here's a breakdown:

Moonrise in Wisconsin will happen just before 8:30 p.m., but the deepest part of the eclipse will start at 11:11 p.m. Sunday.

20K protesters expected at Capitol rally for abortion access. And other Wisconsin context on the issue.

Madison police are estimating around 20,000 people will gather at the state Capitol Saturday afternoon in support of reproductive rights and access to abortion.

"Bans Off Our Bodies" protests are taking place across the country this weekend following the leak of a Supreme Court draft opinion that could overturn Roe v. Wade. Planned Parenthood Advocates of Wisconsin is planning a rally at the Capitol at 4 p.m. Saturday.

While the draft ruling could change before it's likely released this summer, in Wisconsin, overturning Roe would put back in place an 173-year-old state ban on abortions in all cases except when two doctors determine a mother's life is at risk. State Attorney General Josh Kaul has said the Department of Justice will not enforce the ban, but local officials could choose to do so.

Abortion rights will take center stage in candidate campaigns for elections this fall. In Wisconsin, this means critical races for U.S. Senate and governor.

Also last weekend, there was a suspected arson at the Wisconsin Family Action headquarters, an anti-abortion group.

For a timeline of events, from the moment the draft opinion leaked to the most recent protests, read more here. 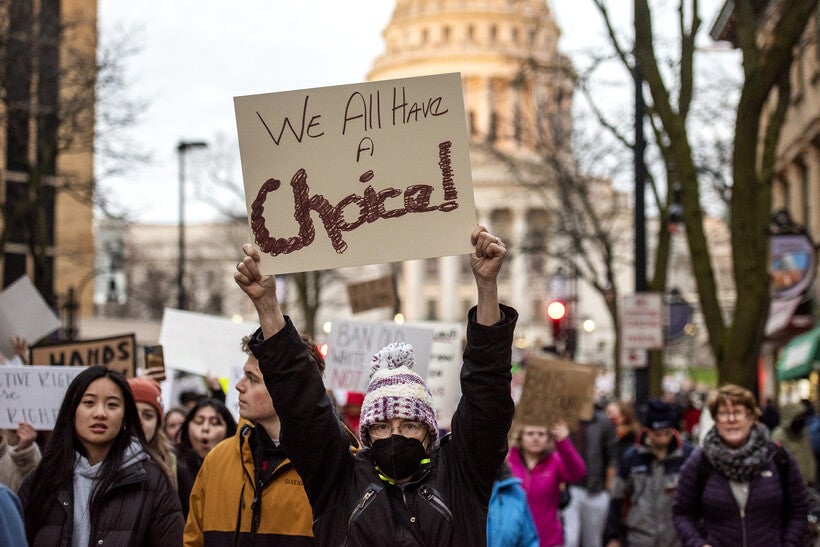 A protester raises a sign during a march in favor of abortion access Tuesday, May 3, 2022, in Madison, Wis. Angela Major/WPR

The seven-day average for new COVID-19 cases in Wisconsin is 2,095 as of Friday. The Wisconsin Department of Health Services has confirmed 12,954 total deaths from the disease.

The organization known for recruiting volunteers to help build residences for low-income families is expanding to development in its newest project in Waukesha County, the Milwaukee Journal Sentinel reports.

A parcel in Waukesha of 3.77 acres would be developed by Habitat for Humanity of Waukesha County with plans for 18 homes accessible to lower-income families and individuals, reports Jim Riccioli. The nonprofit has built 43 homes in Waukesha but no developments thus far.

"It is the largest one-site development in Habitat Waukesha's history," Melissa Songco, chief executive officer for the organization's Waukesha County branch, told Riccioli. "The reason why Aeroshade is especially attractive to us is that it can be a more strategic, longer-term project where we know what we are going to be doing, what we are going to be building for the next three years."

Aeroshade was the name of a window treatment company that previously operated a factory at that site.

Although the deal to purchase the property isn't finalized, Songco said the nonprofit is working on getting approvals done and fundraising dollars secured.

Twenty individuals and organizations were honored Thursday during the Friends of the Madison Arts Commission's Silver Lining Awards.

The ceremony recognized those involved in the arts, community and hospitality sectors who were creative in fufilling their missions throughout the COVID-19 pandemic.

The nominees included The Umbrella Transition Program, an organization run by Rodney Alexander, dedicated to finding housing and providing services for formerly homesless men. Bluestem Jazz was also nominated for its work bringing jazz back to Madison after concerts all but ceased during the pandemic.

The journey of two-time MVP Giannis Antetokounmpo and his brothers from difficult upbringings in Greece to NBA champions is the subject of an upcoming film, the Associated Press reports.

With Giannis and Thanasis Antetokounmpo playing for the Milwaukee Bucks last year and their brother Kostas Antetokounmpo for the Los Angeles Lakers in 2019, the Antetokounmpos became the first trio of brothers to win NBA championships. A fourth brother, Alex, played last season for Raptors 905 of the NBA G League.

In the last two decades, the average time between sentencing and execution in the United States has increased by two-thirds, the U.S. Bureau of Justice Statistics reports — from 11.4 years in 2000 to 18.9 years in 2020.

According to NPR, changed opinions on capital punishment and a lengthier appeals process that delay executions are reasons the time on death row has increased for those sentenced to death.

For victims' families and these inmates, waiting decades to see their cases resolved takes a toll.

Some experts say 20 to 40 years on death row at the expense of the state raises questions of fair treatment of prisoners.