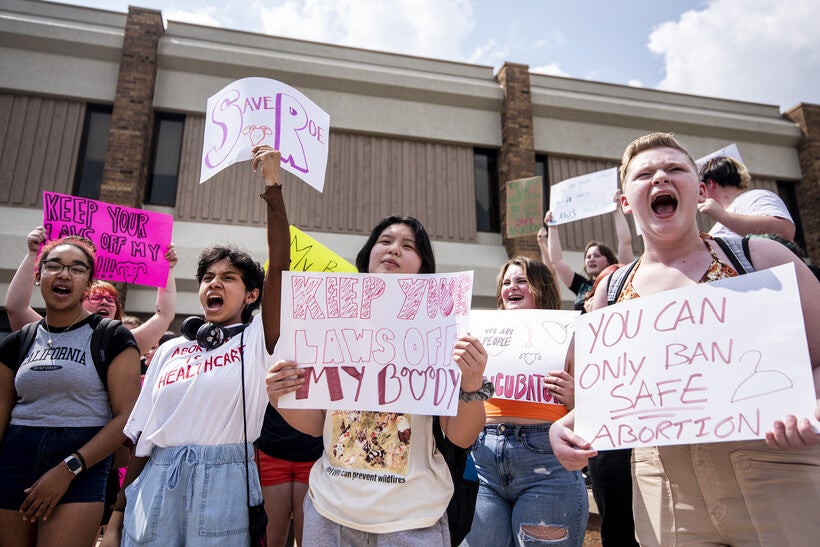 'We shouldn’t have to leave class to fight for our rights': Wisconsin students walk out for abortion access

"In 1973, Roe vs. Wade was decided. How are we still fighting for women’s rights in 2022?" protest organizer Reghan Robinson, a sophomore, said to a group of about 100 students. "The time to act is now, and the action to take is to contact our state representatives, who have the power if our Supreme Court overturns Roe."

Reghan was looking for a project for the high school’s feminist club when the U.S. Supreme Court’s draft ruling on Roe vs. Wade hit the news last week, and decided to organize the protest.

"Abortion is health care," Reghan said. "I am nervous for contraceptives a lot, because I know there’s states like Missouri, Idaho, Tennessee, things like that that are trying to ban IUDs, and birth control is so much more than if you’re having sex or not." 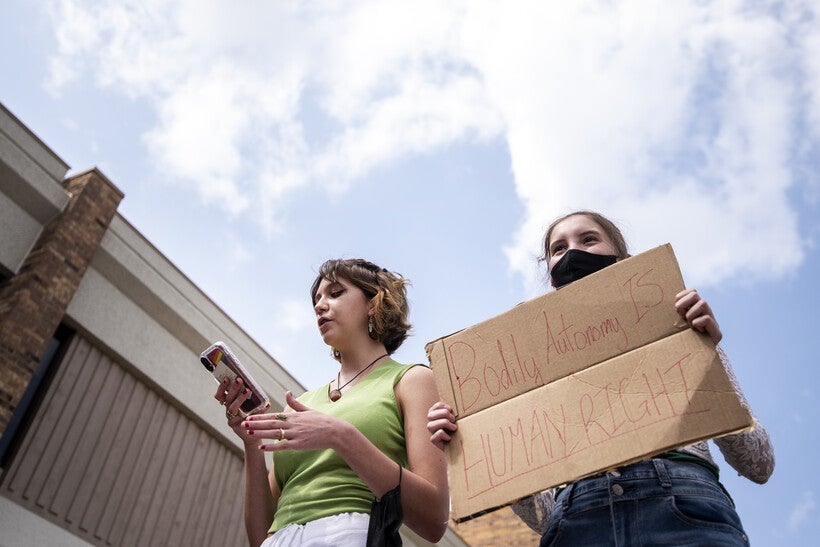 High school sophomores Reghan Robinson, left, and Brea Bierman, right, stand at the front of a crowd of students that walked out of class in support of abortion access Thursday, May 12, 2022, at Stevens Point Area Senior High in Stevens Point, Wis. Angela Major/WPR

While the draft ruling could change before it's likely released this summer, in Wisconsin, overturning Roe would put back in place an 173-year-old state ban on abortions in all cases except when two doctors determine a mother's life is at risk.

Students held signs that read "my body, my choice" and "name a time the government had control over a man’s body."

Holly Melby, a senior, said she wanted to show up to represent the transgender community — she’s a trans woman, but said she knows a lot of trans men who would need access to safe reproductive care, and wanted to show up for them as well as for women.

"I saw (the overturn of Roe) coming — you could kind of feel it looming over like a cloud, so the announcement wasn’t a huge deal, but ... it kind of made my heart sink like, 'Oh, it finally did happen,'" she said. "You can’t just step on people’s rights like this, it’s ridiculous."

More protests for reproductive rights are planned for this weekend in Wisconsin and around the country. Students say they’re passionate about abortion rights. But they’re also frustrated.

"I don’t think that we should be out here," said Danae Marshall, a senior. "This shouldn’t be an issue. We shouldn’t have to leave class to fight for our rights." 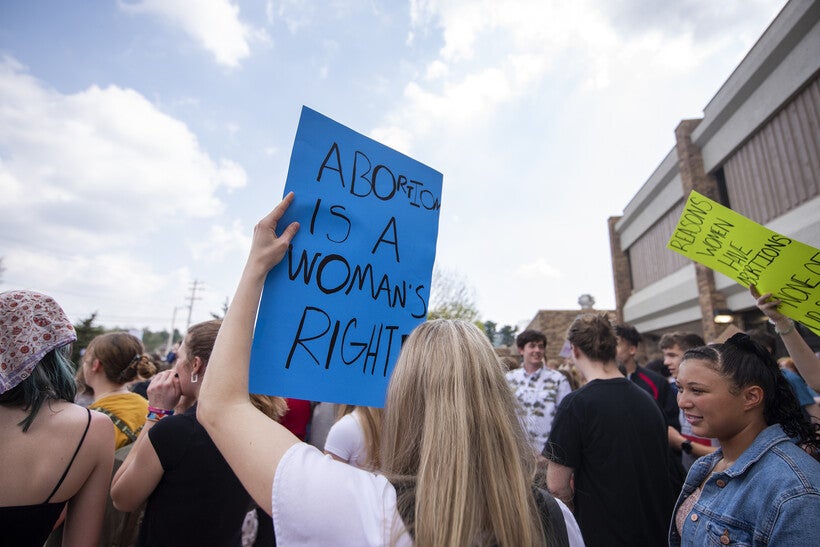 A group of students from the Charles F. Fernandez Center, a nearby alternative high school, came over to join the protest.

Nicole Anderson, a senior at CFC who said she was sexually assaulted at age 14 and has a 3-year-old child as a result, said it’s important for other people in that position to not go through the emotional, physical and financial difficulties of carrying a pregnancy to term if that’s not something they want.

"It’s so difficult taking care of a child, and it’s very expensive, and I have friends who went through the foster care system and it’s not fun," Nicole said. "I love my child to bits, but it’s just so much responsibility."

Several of her classmates said they had also been assaulted, and noted that there are a number of young parents at their alternative school. They say it’s essential that pregnant people have options, and that having kids not be seen as a punishment.

"A lot of it’s going to definitely affect teen parents — teenage girls who didn’t choose to have a child and who accidentally have things happen by mistake or someone forcing it onto them," said Keenan Terrab. "By not giving them a choice to do anything about that, you’re just forcing them to grow up way faster than they need to."