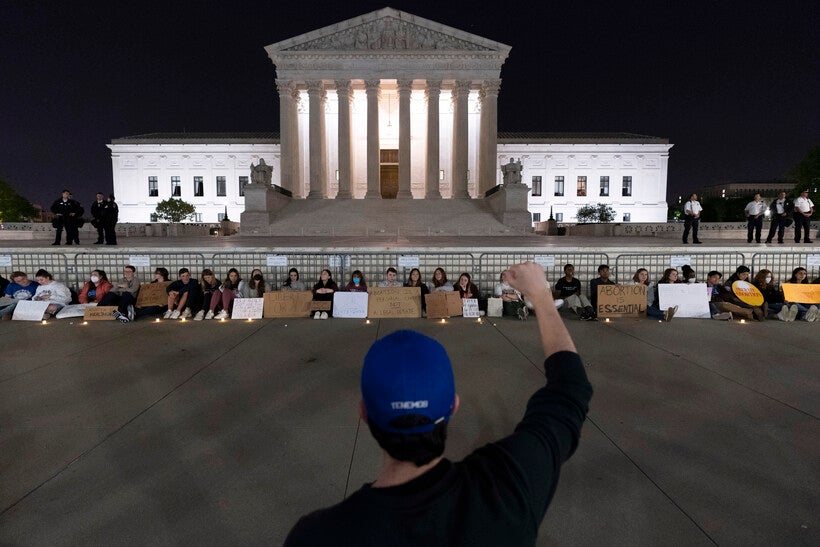 A crowd of people gather outside the Supreme Court early Tuesday, May 3, 2022, in Washington. A draft opinion suggests the U.S. Supreme Court could be poised to overturn the landmark 1973 Roe v. Wade case that legalized abortion nationwide, according to a Politico report released Monday. Whatever the outcome, the Politico report represents an extremely rare breach of the court's secretive deliberation process, and on a case of surpassing importance. Alex Brandon/AP Photo

Republican candidates for governor praised the ruling while Democrats called on the US Senate to pass a federal law codifying Roe
By Shawn Johnson
Updated:
Tuesday, May 3, 2022, 5:30pm
Share:

The opinion won't be final until it's formally issued by the court, and until that time, abortion remains legal in Wisconsin and across the country.

But should the opinion take effect, the U.S. Senate could face the question of whether to write abortion rights into federal law, while Wisconsin's governor could decide to either push for changes to Wisconsin's abortion ban or simply leave it in place.

The U.S. Supreme Court issued its Roe v. Wade decision in 1973. According to a national poll conducted in January by Marquette University Law School, 72 percent of voters oppose overturning Roe v. Wade compared to just 28 percent who favor overturning it. An October 2021 Marquette survey of Wisconsin voters found 61 percent said abortion "should be legal in all or most cases" while 34 percent said it "should be illegal in all or most cases."

Here's how candidates for the two offices reacted to the leaked opinion:

Democratic Gov. Tony Evers told reporters in La Crosse Tuesday that the draft ruling, if made final, would be "horrible" for Wisconsin.

"To say suddenly it's going to be such that people are going to have to go across the border in order to get health care? That's just crazy," Evers said. "We're going to work to try to change it."

While Evers has the power as governor to veto Republican bills that would restrict abortion rights, he can't remove a state abortion ban that's already law. Evers joined 16 other Democratic governors in a letter to congressional leaders calling on them to pass a measure that would codify Roe in federal law.

If that doesn't happen, and if the U.S. Supreme Court's draft ruling becomes final, Evers said the reinstatement of Wisconsin's abortion ban would quickly become a state issue.

Wisconsin's long-dormant abortion ban would make performing an abortion a felony punishable by up to six years in prison.

Evers' Republican opponents all celebrated the leaked opinion shortly after it was released.

Construction executive Tim Michels, who joined the race for governor last week, said he and his wife Barbara had "long worked and prayed for this moment."

"We hope this news proves to be true," Michels tweeted. "As governor, I will always work to protect the unborn, while working to win hearts and minds."

"I pray this is true," Nicholson tweeted.

"I hope this true," read a tweet from Ramthun's campaign. "The sanctity of life should never be questioned."

Republican U.S. Sen. Ron Johnson, who has previously criticized Roe v. Wade and said people could move if they don't like abortion restrictions in their state, didn't comment on the substance of the leaked opinion. Instead, Johnson criticized the leak itself.

"The goal of this unprecedented breach is to intimidate sitting Supreme Court justices. This is yet another example of how the radical left intends to 'fundamentally transform' America," Johnson tweeted. "They are fundamentally destroying our country — they must be stopped."

The leading Democrats vying to replace Johnson all voiced support for passing a federal law that would supersede state abortion bans like the long-dormant ban in Wisconsin.

"It has never been more clear why we need to abolish the filibuster and take immediate action to protect every person’s right to make decisions about their own bodies," Lt. Gov. Mandela Barnes said in a written statement. "Republicans have proven they will stop at nothing to strip every individual of their right to an abortion. We must act now."

Milwaukee Bucks executive Alex Lasry said the leaked opinion was an assault on women's rights, adding that women deserve the right to control their own reproductive freedom.

"I'm enraged and grieving, not just for my wife and daughter, but for women in Wisconsin and all across the country," Lasry said in a statement. "Right this very minute, Senate Democrats need to show urgency. We must overturn the filibuster in order to protect the fabric and freedom of all Americans."

"The Supreme Court has shown their hand," Nelson said in a statement. "Senator Chuck Schumer must call a special session to blow up the filibuster and codify Roe now."

"The way we fill the Supreme Court has lost all credibility," Olikara said in a statement. "The lives of millions of people shouldn’t hinge on the personal health of Justices in their 80s. It’s time for Supreme Court term limits."

The U.S. House passed a bill last year that would protect a person's ability to decide to continue or end a pregnancy and would enshrine into law health care providers' ability to offer abortion services "prior to fetal viability." The bill would also prohibit restrictions on abortion after fetal viability "when, in the good-faith medical judgment of the treating health care provider, continuation of the pregnancy would pose a risk to the pregnant patient's life or health."

While the plan passed the House largely along party lines, it failed in the U.S. Senate on a 46-48 procedural vote. Democratic U.S. Sen. Tammy Baldwin, who co-sponsored the proposal, called on senators to revive it.

"If #SCOTUS is going to legislate from the bench and turn back the clock 50 years on #RoeVWade, then the Senate needs to pass my Women’s Health Protection Act," Baldwin tweeted. "And if we need to eliminate the filibuster to get it done, we should do that too."