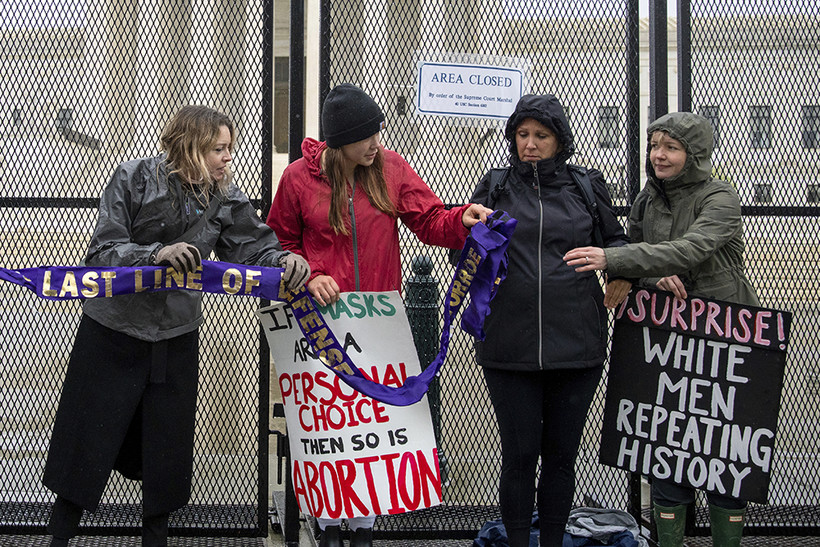 Abortion-rights protesters pass along an ongoing art project called "Line up for Roe" by Dr. Katherine Westaway outside of the U.S. Supreme Court, Saturday, May 7, 2022, in Washington. A draft opinion suggests the U.S. Supreme Court could be poised to overturn the landmark 1973 Roe v. Wade case that legalized abortion nationwide, according to a Politico report released Monday. Amanda Andrade-Rhoades/AP Photo

Protesters gather in Madison, Milwaukee in show of support for abortion rights

Madison demonstration is second this week after release of Supreme Court draft that would overturn Roe v. Wade
By WPR Staff
Share:

Hundreds of supporters of abortion rights took to the streets on Saturday in Madison and Milwaukee in protest of a leaked draft showing the U.S. Supreme Court could gut or overturn the landmark decision that legalized abortion across the nation.

The Madison march, organized by MADSA Socialist Feminist Working Group and the Democratic Socialists of America-Madison, was the second protest event this week. On Tuesday, the day after the draft opinion leaked, about 1,000 people gathered to demonstrate.

There are definitely a few hundred people here at the Capitol by the top of State Street. pic.twitter.com/8172mHsJtN

In Milwaukee, the Defend Roe V. Wade Rally & March began at 4 p.m. at Planned Parenthood, where rally-goers made signs prior to the march. Protesters marched from Planned Parenthood about 2 miles to the U.S. Courthouse on Wisconsin Avenue. The event was organized by the Milwaukee Alliance Against Racist & Political Repression, Midcoast Collective, Milwaukee's International Women's Day Coalition and four other organizations.

Protesters on Saturday carried signs, chanted and heard speeches from activists who called for mobilization in elections, aid to abortion providers and public protests.

If the draft opinion or something similar overturning 1973's Roe v. Wade becomes the court's final opinion, it would give states the right to outlaw abortion. That is expected to create a patchwork of availability that would vary greatly in different regions. In Wisconsin, a 173-year-old abortion ban in would go back into effect. Wisconsin Attorney General Josh Kaul has said he will not enforce the ban, though local law enforcement officials could choose to do so.

The website Politico published the draft on Monday, and Chief Justice John Roberts confirmed its authenticity the following day.

Abortion rights are under attack!
What do we do?
Stand up, fight back!#StrikeTheBan #AbortionIsEssential https://t.co/4FHlvhsMEl pic.twitter.com/aUn9ZwrRFq

In 1973, the U.S. Supreme Court ruled in Roe v. Wade that pregnant people have a constitutional right to an abortion within the first two trimesters, when a fetus is unable to survive outside the womb, or about 23 or 24 weeks gestation.

The court's official opinion on Roe v. Wade is expected to come sometime before the court adjourns for the summer in late June. 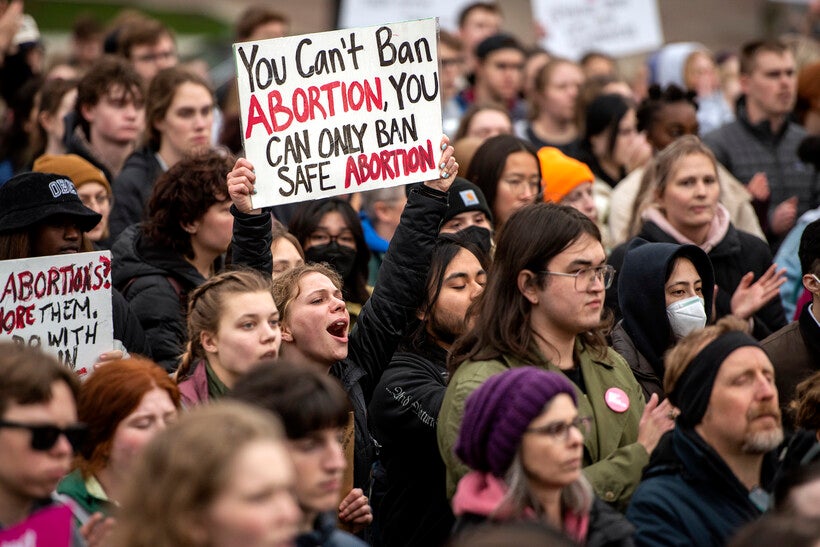 Protesters chant in front of the Wisconsin state Capitol in response to the Supreme Court’s draft ruling on Roe vs. Wade on Tuesday, May 3, 2022, in Madison, Wis. Angela Major/WPR

In Wisconsin, there were 6,430 induced abortions in 2020, according to the state Department of Health Services. That was on par with the prior two years, according to state data that dates back to 1976. The state recorded the fewest number of abortions at 5,612 in 2016.