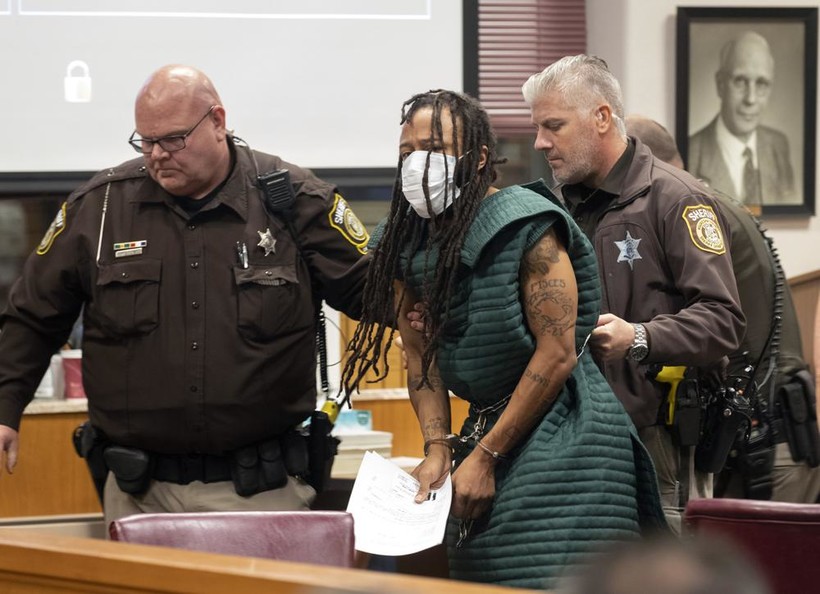 Darrell Brooks, center, is escorted out of the courtroom after making his initial appearance, Tuesday, Nov. 23, 2021 in Waukesha County Court in Waukesha, Wis. Prosecutors in Wisconsin have charged Brooks with intentional homicide in the deaths of at least five people who were killed when an SUV was driven into a Christmas parade. Mark Hoffman/Milwaukee Journal-Sentinel via AP Photos

The driver accused of killing six people and injuring several dozen at the Waukesha Christmas parade is facing new charges of witness intimidation.

Darrell Brooks Jr., 39, had been released from the Milwaukee County Jail on Nov. 11 on $1,000 bail. Ten days later, police say he intentionally drove into the parade.

He had been charged on Nov. 5 with recklessly endangering safety, bail jumping and three misdemeanors, including domestic violence battery and disorderly conduct.

Those charges were the result of a Nov. 2 incident where Brooks punched a 31-year-old woman in the face. He later returned and ran over her with a Ford Escape, according to a criminal complaint filed Monday.

Brooks tried to intimidate the woman after he assaulted her with multiple manipulative phone calls while he was in jail, according to the complaint.

According to the complaint, Brooks promised to marry the woman on the condition she didn’t testify against him. He also emphasized their 16-year history together to try to get her to drop the charges.

"(Brooks) went on to tell (the victim), 'I’m sitting up here facing 60 f---ing years ... you have to keep your mouth shut,'" according to the complaint. "The defendant continued the emotional manipulation of (the victim) by telling (her) the defendant would 'die in prison' and to 'think how bad that would make my momma feel. Think of how much pain that would be on her, this is all stuff you wasn’t thinking about when you opened your mouth.'"

Over 12 days, Brooks repeatedly called the woman and threatened her, according to the complaint.

Carmen Pitre heads the Sojourner Family Peace Center in Milwaukee. She says it’s very common for an abuser to use the phone while in jail to intimidate their victim.

"It is an extension of the cycle of control in a person’s life," Pitre said. "When you are trapped in a violent relationship, in essence, the person is saying, 'I’m going to control you through a variety of means and methods. I’m going to intimidate you.'"

Brooks being free on bail shortly before the Waukesha Christmas parade tragedy has prompted discussions about the state’s bail system, and a call by Republicans for Milwaukee County District Attorney John Chisholm to resign.

Last week, Chisholm told a Milwaukee County Board committee that Brooks being free was a mistake. He said it was human error resulting from a young, overworked assistant district attorney.

Brooks is now in jail with a $5 million bond.