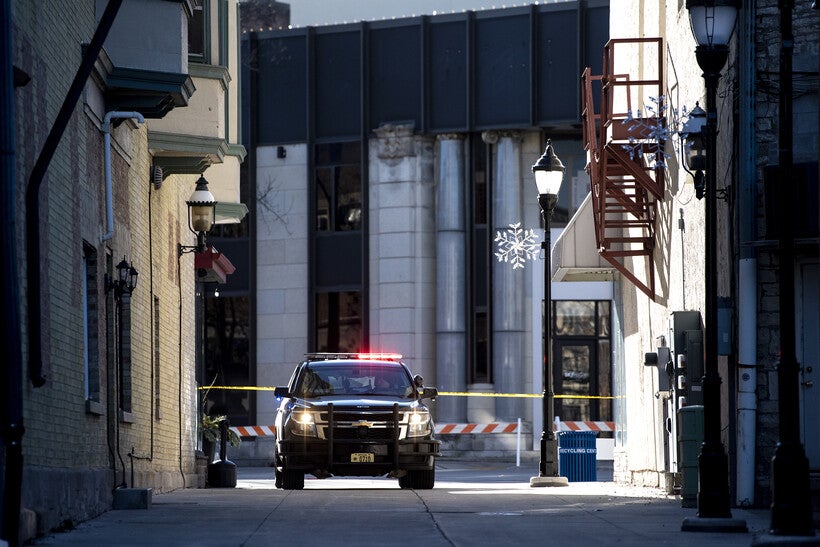 A police car is parked near the scene of the Christmas parade tragedy Monday, Nov. 22, 2021, in Waukesha, Wis. Angela Major/WPR

The bond for Darrell Brooks — the man who ran an SUV through the Waukesha holiday parade, killing six people and wounding 68 others — is set at $5 million.

Brooks has faced charges in the past, and got out on bail in both instances. Most recently, he was released from the Milwaukee County Jail on Nov. 11 after being charged with second degree recklessly endangering safety, felony bail jumping, battery, obstructing an officer and disorderly conduct on Nov. 5. He posted $1,000 cash bail.

But the Milwaukee County District Attorney's office said in a statement Monday that the bail recommendation was "inappropriately low."

The pandemic may also be a factor in Brooks' release, according to NPR.

"Milwaukee County, Waukesha County, Dane County — some of the more populated counties — were really backlogged," Erika Bierma, a criminal defense attorney with Axley Brynelson, LLP, told NPR. "A lot of courts in the populated counties may have reevaluated bond decisions in a way that they wouldn't have done, pre-COVID."

The seven-day average for new COVID-19 cases in Wisconsin is 2,749 as of Friday. The Wisconsin Department of Health Services has confirmed 8,964 total deaths from the disease.

Wisconsin represents at the 2022 Winter Olympics

Three curlers from McFarland are heading to the Winter Olympics again.

As the Omaha World-Herald reports, Team Peterson — which includes Becca Hamilton and Nina Roth from McFarland — competed in the U.S. Olympic curling team trials last weekend. It was there that Tabitha Peterson, Tara Peterson, Roth and Hamilton earned their place at the 2022 Winter Olympics in Beijing.

Tara Peterson, Roth and Hamilton were on the team that won the 2017 U.S. Olympic curling team trials and went to the 2018 Winter Olympics. The team did not qualify for the medal round in Pyeongchang, South Korea.

Another curler from McFarland is also heading back to the Olympics: Matt Hamilton. Matt, Becca's brother, is on the U.S. men’s curling team, which earned their spot in Beijing last weekend as well.

Matt and his team won gold in Pyeongchang in 2018. He, Becca and Roth have practiced at the Madison Curling Club.

Since 2000, Wisconsin has lost around 68 percent of its dairy farms. Still, milk production continues to rise as lasting farms become larger and more efficient through improved cattle genetics and advances in technology.

As an outgrowth of the Milwaukee Journal Sentinel's Dairyland in Distress series, the paper and Milwaukee PBS partnered to document both the challenges and opportunities in Wisconsin’s agriculture industry.

The documentary, follows four farm families as they share their stories and hopes for a future that, in some cases, might not include dairy.

The Madison Metropolitan School District Board of Education voted earlier this week to rename James Madison Memorial High School. The new name will honor Vel Phillips, a Wisconsin icon who broke a number of gender and race barriers throughout her career.

The school will be called Vel Phillips Memorial High School, Channel3000 reported. The change will take effect at the start of the 2022-23 school year.

The unanimous school board vote was Monday night. Last month, a committee chose Vel Phillips Memorial High School as its recommended name, Channel3000 reported. There were two dozen different names under consideration at one point.

The move comes after a push to remove Madison’s name from the school because the former president owned slaves, Channel 3000 reported.

Phillips, a civil rights leader, died in 2018. She was Wisconsin’s first Black secretary of state, the first Black woman to graduate from the UW-Madison School of Law in 1951 and the first woman, as well as Black person, to serve on the Milwaukee City Council and to become a Wisconsin judge.

For the next week, Marcus Theatres' Ridge Cinema in New Berlin and North Shore Cinema in Mequon will offer vaccination-required shows for "Ghostbusters: Afterlife," "King Richard" and "House of Gucci."

"We hear from people that there's a segment of the population who isn't comfortable going back to theaters yet," Marcus told the Milwaukee Journal Sentinel. "For them, if this is something that makes them feel better about going to the movies, we thought, 'Great, let's accommodate them.'"

Nitrates, while naturally occurring, are also a byproduct of nitrogen fertilizer and farmers in the Midwest use a lot of it to grow corn and soybeans. And those nitrates make their way into surface and groundwater that eventually becomes drinking water.

"We also see issues with the quantity of nutrient that is stored on the landscape because of the drought," he said, adding that excess nutrient stored in the soil upstream makes for the potential for extremely high nitrates flushing into the rivers during intense weather events and flooding.