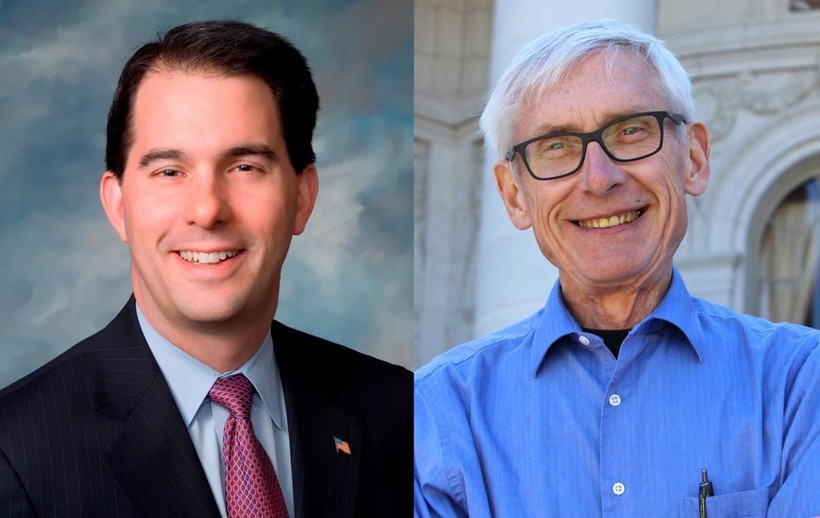 The debate was hosted by the University of Wisconsin-Milwaukee. It came as the candidates enter the final days of the race, which recent polls show is neck-and-neck.

While much of the debate saw the candidates retread familiar themes, they also touched on issues that haven't received as much attention during the race, including climate change and immigration.

On climate change, Evers criticized Walker for the removal of language on the subject from the state Department of Natural Resources website.

"I believe in science," Evers said. "We're going to bring back science to the state of Wisconsin."

Walker touted his commitment to the environment by referencing his history as an Eagle Scout.

"I want great natural resources: water, land, air, you name it," he said. "That's important for our state."

The governor said changing weather patterns around the world could be attributed to "a combination of things and the actions of human beings are one piece of a larger puzzle."

Discussion of immigration, which first surfaced during the last debate, touched on so-called "sanctuary cities." Sanctuary cities are communities that have passed rules barring law enforcement from asking people their immigration status or reporting people living in the country illegally to the federal government.

Evers said making Wisconsin a "sanctuary state" wasn't a priority for him and that communities should be allowed to determine their own policies.

"My priority is to return local control to municipalities," he said.

Walker didn't weigh in on the issue during the debate, but in the past has said he was "just fine" with the failure of a GOP-backed proposal that would prohibit sanctuary cities in Wisconsin.

The candidates also continued to spar over health care, which has been a major issue in the race.

Evers pushed for accepting a federal expansion of Medicaid dollars — which Walker has declined — and argued for guaranteed insurance coverage for people with pre-existing conditions in Wisconsin.

Evers criticized Walker for not calling for state Attorney General Brad Schimel to drop out of a federal lawsuit challenging the Affordable Care Act.

"The people need to know why you won't drop that lawsuit," Evers said. "This is an issue that isn't a Democrat or Republican issue. It's a Wisconsin value issue."

Walker argued a state-based solution for guaranteeing insurance coverage for people with pre-existing conditions is the way to go, rather than the current guarantee provided under the federal Affordable Care Act.

"We can protect (consumers) without protecting the failure of Obamacare," Walker said.

In response to questions about education funding and student success, Walker and Evers offered differing views, with the governor touting apprenticeship programs and his Democratic rival calling for larger state investments in things like early childhood education.

Walker has proposed an expansion of apprenticeships as a way to spur student engagement and cure lagging test scores.

Walker also touted his changes to collective bargaining in Wisconsin as a money-saving measure for schools, allowing them to send more money into classrooms.

Evers criticized Walker for education cuts he put in place after taking office in 2011. He said his own budget proposal, released in September, would provide solutions to lagging test scores and achievement gaps in the form of increased spending on early childhood education, mental health programs, and special education.

Regarding higher education, Walker touted a tuition freeze that’s been in place for six years.

"I think tuition is too high — I believe we can push it even lower than what it is," Evers said, arguing state aid should be increased in order to do so.

The candidates also differed over the familiar issue of road funding, with Walker accusing Evers of backing steep tax increases to pay for roads.

"I think you should be troubled any time (someone) from Madison tells you they're not going to tell you how much they're going to raise your taxes until after the election," Walker said. "Ladies and gentlemen, you should hold on to your purses and to your wallets."

"If I'm a taxpayer, I'm worried about Tony Evers being the governor," he said.

Walker has criticized Evers for saying "everything is on the table" regarding road funding.

"My gut level is that I wouldn't want to increase the gas tax at all," Evers said, but argued he didn't walk to chill potential compromise on the issue by coming to the table with his own line in the sand.

"'My way or the highway' — that's not the way we're going to solve this problem," he said.

The election is set for Tuesday, Nov. 6.