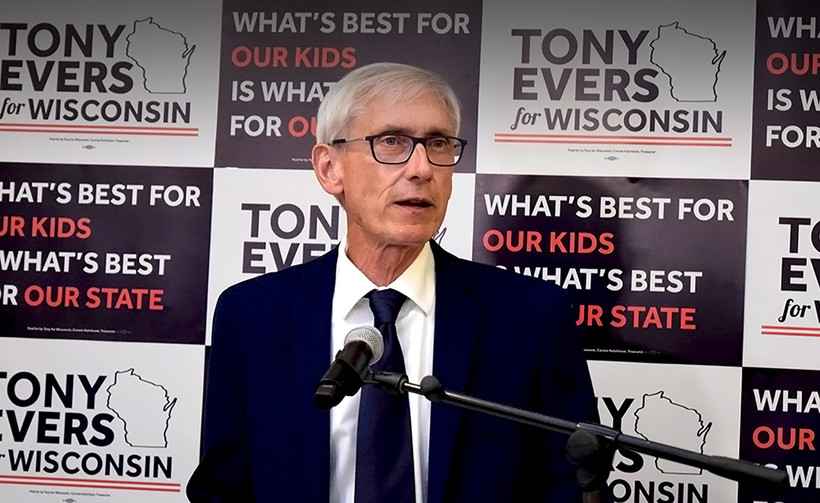 Democratic candidate for governor and state schools superintendent Tony Evers used his annual State of Education address Thursday to push for a change in budget priorities in Wisconsin.

The move came as Republicans warned against possible tax increases under Evers’ leadership, arguing those would harm the state economy.

"Right now, Wisconsin priorities are out of whack," Evers said in his address. "The pendulum is swinging back to a time when we value an investment in our kids’ futures and we demand our leaders do the same."

Overall, the proposal represents a 10 percent increase in state spending on K-12 education.

As the Democratic gubernatorial candidate, Evers said he could pay for the proposal without raising taxes, by making cuts elsewhere.

"It’s always about priorities — we found $4.5 billion for Foxconn suddenly out of thin air," he said. "We will work with the Legislature to make sure taxes remain low in the state of Wisconsin, but we will have different priorities than the present governor."

Evers said he may consider "shifting" income taxes to do away with policies that benefit high earners, including the manufacturing and agriculture tax credit.

"We’ll be looking at questionable practices," he said. "I think we need to prioritize the working men and women in Wisconsin."

Evers said he "rejects the notion" that he’s a "tax-and-spender."

"Taxes have gone up under Scott Walker, all those millions of people who voted for school referenda — they did it because Scott Walker has decided not to fund their public schools," Evers said.

He also pointed out many communities have passed wheel taxes to cover road repair work in response to insufficient state allocations.

Evers’ comments came just hours after the Walker campaign released a new ad saying Evers may raise the gas tax by $1 a gallon to pay for road work.

"Tony Evers, well, he’ll raise property taxes, raise income taxes and raise gas taxes by as much as a dollar a gallon," Walker says in the ad. "And that would put our jobs at risk."

Sen. Tom Tiffany, R-Hazelhurst, also expressed concern over Evers’ potential rearrangement of the state tax code, including an elimination of the manufacturing and agriculture tax credit.

"I’ve talked to many manufacturers since we instituted that credit and one of the big reasons why they’ve expanded here in Wisconsin is because of that manufacturing credit," he said. "It has done exactly what we wanted, which was to grow our economy."

Tiffany also argued a gas tax increase would have a disproportionately negative effect on rural and northern Wisconsin residents.