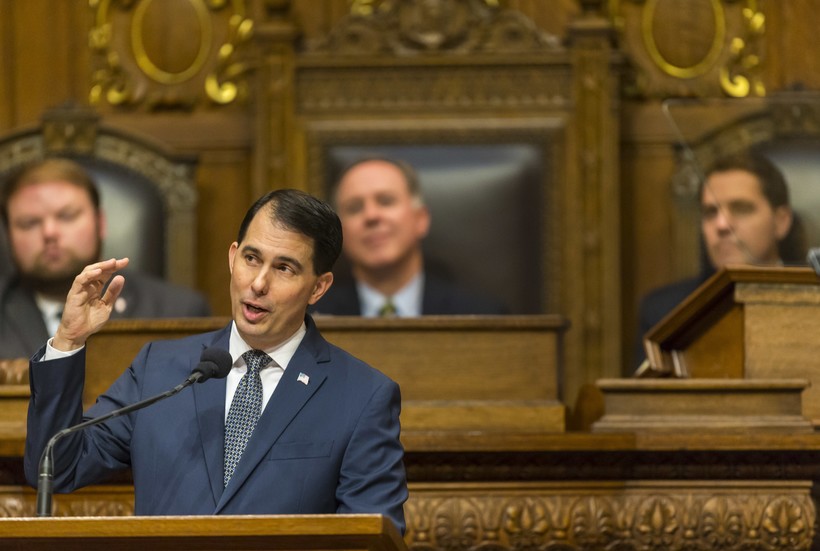 Wisconsin Gov. Scott Walker addresses a joint session of the Legislature in the Assembly chambers during the Governor's 2017 state of the state speech.

Gov. Scott Walker said he wants to cut undergraduate tuition for Wisconsin residents at University of Wisonsin System schools in his annual State of the State address Tuesday.

The governor didn't offer further details on the tuition cut, including how large it would be or if it would be accompanied by increased state aid for the UW System. Those details are expected to be included in the governor’s budget address next month.

Walker said his proposal was inspired by listening sessions around the state.

"It wasn't just students who are concerned about the cost of higher education – it is parents, grandparents, educators and many others," Walker said. "That's why I am pleased to announce that our 2017-2019 state budget will do more than just freeze tuition. We will actually cut tuition for all Wisconsin undergraduates throughout the UW system."

There has been a freeze on undergraduate tuition for Wisconsin residents attending UW System schools for four years.

"I definitely will take a look at Gov. Walker’s position, but considering the fact that we are one of the lowest in the Big Ten for tuition, my focus is on making sure that we have access, so students get to graduate in four years and that we have a reasonable price for tuition," Vos said.

Vos added he's "open-minded" about the proposal, but has yet to be persuaded the tuition cut should be a priority for the state Legislature.

A spokeswoman for Senate Majority Leader Scott Fitzgerald, R-Juneau, who missed the governor’s speech due to illness, said the senator "has been a strong proponent of the UW tuition freeze and looks forward to reviewing the governor’s UW System budget."

UW-Madison Chancellor Rebecca Blank also weighed in on the governor’s proposal, saying she hopes a tuition cut would come with additional state funding to compensate, as well as approval of the UW System's request for a $42.5 million funding increase in the upcoming budget.

"It is our hope that the governor and Legislature will not only fully fund the proposed tuition reduction but also provide additional investment in the UW System in line with the modest request made by the Board of Regents, which is critical if we are to continue providing an outstanding educational experience to our students," Blank said in a prepared statement.

Democratic leader Peter Barca, D-Kenosha, questioned whether the governor would allocate such funding to compensate for the freeze.

"The problem has been that he’s never funded the freeze, so I can’t imagine he’s going to fund a decrease in tuition," Barca said. "I mean certainly we support a freeze, we support even cutting tuition, but you have to fund it."

Walker's last budget cut $250 million in funding from the System.

In his speech, the governor also said he wants to provide a "significant increase" for public schools in the 2017-19 budget.

"It is a moral imperative that every child has access to a great education," Walker said. "But it is also an economic imperative as we need to grow the workforce in Wisconsin."

The funding increase will include aid for rural schools for things such as transportation and broadband access, as well as compensation for declining enrollment in some rural districts, Walker said.

"(Democrats) have been staunch advocates for public education and dollars going into our public schools for instruction, but we haven’t seen that," Shilling said. "The governor has chosen not to support public schools in that way."

Walker also said the next budget will include "the largest increase in transportation aids since the 1990s," including a 25 percent annual increase for the Local Road Improvement Program and $65 million more for local governments to use on road projects.

The governor’s speech was short on other legislative priorities, instead focusing on his administration’s accomplishments over the past six years. Those accomplishments included the state’s roughly 4 percent unemployment rate, the UW System’s tuition freeze and enrollment in the state’s Food Share Employment Training program.

That food share program requires individuals receiving food stamps to be employed or enroll in worker training programs. Walker said more than 21,000 people have gone through the program and are now employed in the state.

Roughly 64,000 people have lost their food stamp benefits because of the program, according to numbers from the state Department of Health Services.

The governor also spoke about Wisconsin’s worker shortage, saying workforce issues and job training programs will be his "top priority" in 2017.

"Our biggest challenge is not creating jobs, but finding people to fill them," Walker said.

The governor often repeated the line, "We are working and winning for Wisconsin" in his remarks.

"Are the people of Wisconsin – you, me, us – better off than we were six years ago? The answer is a resounding 'yes,'" he said.

The governor will give his annual budget address sometime in February. That speech is expected to include more detailed legislative priorities.

Related Links:
Coverage Of 2017 State Of The State Address