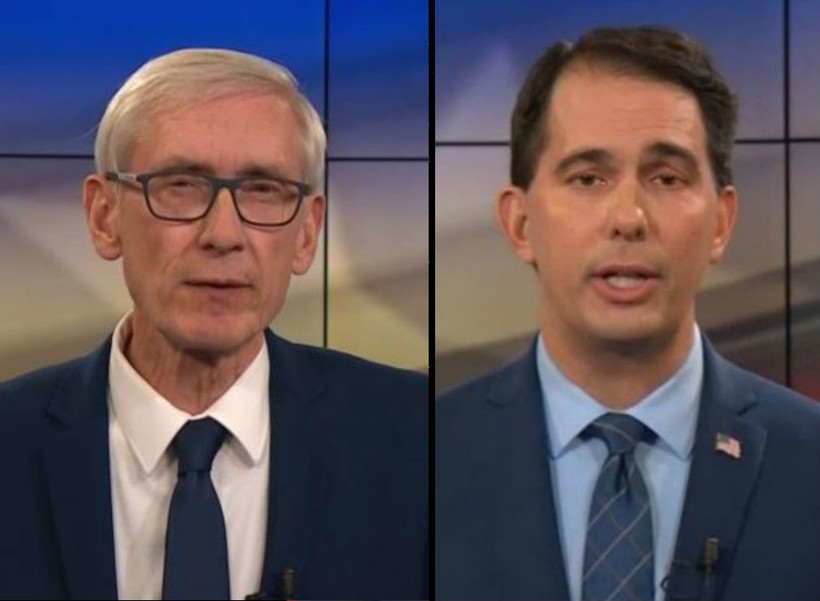 But the two gubernatorial candidates also covered less familiar ground, weighing in on whether the state should legalize marijuana, criminalize a first drunken driving offense and offer driver's licenses to immigrants living in the country illegally.

The first gubernatorial debate, hosted by the Wisconsin Broadcasters Association, also gave both candidates a chance to trade one-liners over attacks that were in the news this week, one involving former Walker cabinet secretaries and another involving a case of plagiarism at Evers' state Department of Public Instruction.

Walker was asked immediately about four former cabinet secretaries who've publicly criticized him during the campaign, including most recently this week.

During the debate, Walker was asked how the charges affect his credibility.

"I'm not afraid to have people with diverse opinions in my cabinet," Walker said, before alluding to Gottlieb. "For years I had a cabinet member who wanted to raise the gas tax, and I told the voters clearly I would never raise the gas tax without an equal or greater reduction elsewhere in their tax burden overall."

"You put your political agenda ahead of the people of Wisconsin," Evers said. "Now that is something that frankly is very frightening to me as a citizen, and I will change that going forward."

The very next question involved a story first reported by Politico about four plagiarized passages in a budget document released by the DPI, which Evers leads.

"I don't know of a teacher out there that would allow a student to hand in a term paper that plagiarized major portions of a document without attributing it," Walker said.

Ever called it a mistake not to cite the passages, but he said he'd talked to the people involved, and it was fixed.

He later came back to the theme when talking about Walker's latest education budget, which Evers has praised.

"My definition of plagiarism is when Scott Walker takes my budget and calls it his own," Evers said.

Both candidates were asked about polling that shows a significant number of Wisconsin residents are concerned about the quality of their roads and bridges.

Walker disputed that, slicing numbers from the most recent Marquette University Law School poll another way.

"Our roads are crumbling," Evers said. "We have people in northern Wisconsin who are scraping the asphalt off the roads and they're driving on gravel roads."

When it came to how they'd fund roads, Walker attacked Evers for saying everything should be on the table to pay for transportation without specifying a number.

"He's not telling us what it is," Walker said. "If you don't have a plan until after the election, ladies and gentlemen, you need to be ready for a massive gas tax increase. A dollar-a-gallon would be $1,200 for a typical family."

Evers has said flatly he won't support a dollar-per-gallon increase in the gas tax. He repeated that again Friday.

"Holy mackerel," Evers said. "Of course, the people of Wisconsin understand — except for Scott Walker, who keeps repeating it — a dollar-a-gallon is ridiculous. It's never going to happen."

Evers said he would work with Republicans and Democrats to come up with a long-term solution to transportation funding. He didn't specify any particulars.

The candidates were asked whether the state should drop out of a lawsuit Walker approved that seeks to overturn the Affordable Care Act, including its protections for people with pre-existing conditions.

They were also asked how they can guarantee the state will provide affordable coverage for preexisting conditions if the ACA goes away.

"We can protect people with pre-existing conditions in the state without protecting the failure that is Obamacare," Walker said. "The difference between Obamacare."

Walker supports a state bill that would require coverage for people with pre-existing conditions, although that legislation would let insurance companies impose lifetime limits on coverage, something they can't do under the ACA.

"Scott Walker is talking out of both sides of his mouth," Evers said. "He wants to save pre-existing conditions, but he's in federal court to get rid of the Affordable Care Act, which will get rid of those protections."

The candidates were asked their thoughts on the legalization of marijuana, an issue voters in several counties will weigh in on through advisory referendums next month.

"I'm willing to take a look at those referenda and possibly support legalization," Evers said.

Walker said he would listen to public health officials and law enforcement.

"They're concerned it's a gateway drug," Walker said. "Outright legalization — I think from the folks in law enforcement and public health — they've said that would be a big problem."

Wisconsin is the only state in the nation where a first operating-while-intoxicated arrest isn't a crime. Evers said he was open to changing that.

"I would look at making it criminal," Evers said. "But … it would have to be tied to ways to not just incarcerate people but to help them return to society."

Walker focused on repeat drunken drivers in his answer.

"We need to make it a taboo for anyone to be driving under the influence," Walker said.

When pressed twice on whether that meant criminalizing a first drunken driving offense, the governor eventually responded "no."

On two questions about immigration, Evers said he was open to changing state laws to accommodate immigrants while Walker said he wasn't.

Specifically, both candidates were asked whether they would support a state driver's license for immigrants living in the country illegally.

"The answer is yes," Evers said. "Undocumented folks are working hard at jobs all across the state of Wisconsin, paying taxes, paying into Social Security. They should have the opportunity … to have permits."

"We need to make sure that we're in compliance with federal law," Evers said. "And that means to address issues like this, we need the federal government to make those changes."

Evers also said yes when asked whether he would support in-state tuition for DACA students, or students who were brought into the United States illegally as children.

"I would propose or support legislation that allowed DACA students to be part of, to have in-state tuition," Evers said. "We have to make sure that we recognize how important our young people are."

On this issue, Walker also referenced the need for federal changes.

"We've got to make sure folks in Washington change the laws so we can adjust things going forward," Walker said.

Walker was asked twice more for a "yes" or "no" answer about whether DACA students should be entitled to in-state tuition as they are in other states. He said the state couldn't do it because of federal law.

Walker and Evers will debate next Friday at Marquette University.