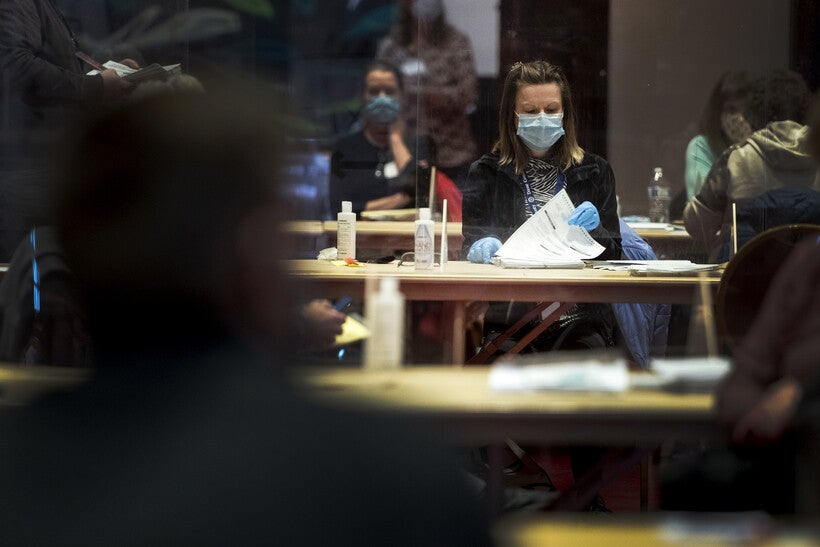 Biden picked up 193 votes in the recount and Trump gained 119 votes, according to numbers released by the Dane and Milwaukee County clerks.

Biden went into the recount with a margin of victory of about 20,600 votes statewide.

The vote total changes from the recount were in large part due to the discovery of 386 previously unopened ballots in Milwaukee County last week. In Dane County, 137 ballots were thrown out because their absentee ballot envelopes lacked a required signature or address from a voter or witness.

Shortly after Dane County certified its recount results Sunday morning, county clerk Scott McDonell said the re-tallying showed "there was absolutely no evidence of voter fraud in this election."

"This incredible level of transparency should provide reassurance to the public that the election was run properly and accurately and there was no fraud," he said. "I said this from day one that these (vote totals) were not going to change much at all, and that's exactly what happened."

President Trump’s campaign requested the partial recount in Wisconsin’s two Democratic strongholds on Nov. 18, citing “illegally altered” and “illegally issued” ballots. In its filing, the campaign said those illegal acts happened across the state, but that they were particularly prevalent in Dane and Milwaukee counties.

State election officials have said for weeks there is no evidence of fraud or irregularities in the election.

The recount began on Nov. 20, and the Trump campaign immediately lodged complaints, pushing for large categories of ballots to be thrown out.

Trump tweeted Saturday afternoon that his campaign plans to file a lawsuit over those ballots, aiming to have a court throw them out.

The campaign argues ballots cast during in-person early voting shouldn’t count because clerks don’t require voters to fill out a paper application before being issued a ballot in that setting. That procedure has been in place for years. In-person early voters are still required to be registered to vote and to show a valid ID before being issued a ballot.

According to numbers released by the Wisconsin Elections Commission, 61,149 voters cast ballots during in-person early voting in Dane County, and 109,002 voters did so in Milwaukee County.

The campaign objects to ballots from indefinitely confined voters because voters who identify themselves as "indefinitely confined" on an absentee ballot application don’t have to include a copy of a valid ID in order to be issued a ballot. This procedure, which is written into state law, has also been in place for years.

Two lawsuits have already been filed before the Wisconsin Supreme Court attempting to have the state’s presidential election results thrown out. The first case argues tens of thousands of "illegal" votes were cast in Wisconsin's election. The second case alleges election results were "tainted" by the use of ballot drop boxes throughout the state.

Editor's note: This story was updated after Dane County corrected two entry errors in its final recount certification on Monday morning, which affected the final totals for both candidates.