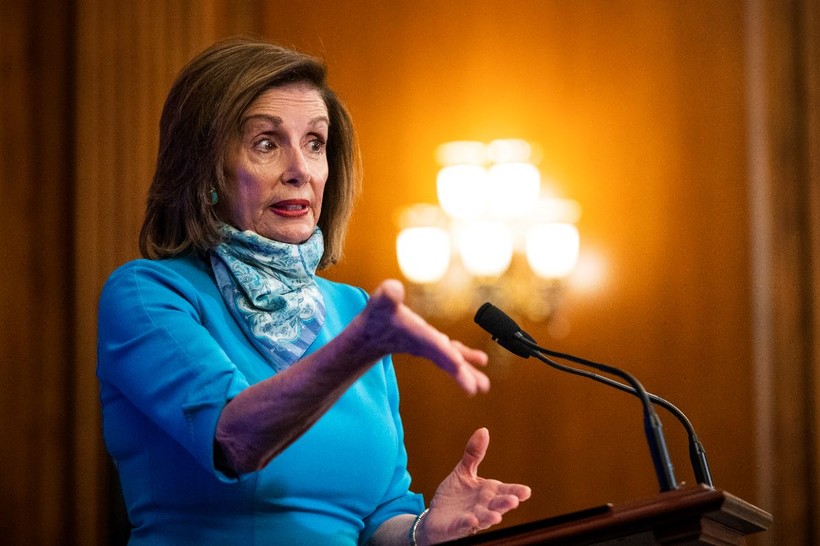 Pelosi To Democrats: 'It's All Riding On Wisconsin'

U.S. House Speaker Nancy Pelosi used a Zoom call with Wisconsin Democrats Thursday to lay out the stakes of the November election in the starkest of terms.

"No pressure," Pelosi said casually. "It's all riding on Wisconsin."

Pelosi is hardly the first person to play up Wisconsin's pivotal role in the 2020 election after President Donald Trump narrowly won the state four years ago in his successful bid for the White House.

But Pelosi's latest call to action came during a week when the Democratic Party is holding its national convention virtually instead of in Wisconsin as originally planned.

Pelosi alluded to the missed opportunity for Wisconsin, telling state party activists she had talked to Democratic National Committee Chairman Tom Perez about holding a victory celebration in Wisconsin after November.

"I told Tom Perez, I said 'Tom, we're not going for the convention, but can we go for a celebration — to Milwaukee — for a celebration after we win all of this in November when we elect Biden president of the United States?'" Pelosi said.

"But there's a lot to do between now and then," she said. "We can convince everyone, but unless we get out our vote, we're just having a conversation."

Like Pelosi, Holder said Wisconsin was the key to the 2020 presidential election.

"The fate of the United States, the fate of the western world is on your shoulders," Holder said. "Joe Biden carries Wisconsin, it's going to be incredibly hard for Trump to win reelection. So not too much pressure."

At the same time, Holder stressed the importance of races for the state Legislature, where Wisconsin Republicans are vying for a two-thirds supermajority that would let them override any vetoes by Democratic Gov. Tony Evers.

"This is an existential presidential election. I get that. But so are the races happening down the ballot in Wisconsin," Holder said. "On a day-to-day basis, our lives are really more impacted by state legislators, by governors, than we are by the person who is the president of the United States."

Evers told Democrats that he had focused his fundraising this year on helping Democrats prevent a veto-proof Republican majority, which he said would let GOP lawmakers draw gerrymandered political maps for the next decade.

"That's what this year's election is all about for me," Evers said. "Sure it's about defeating 'the Trumpster' and making sure his brand of nonsense comes nowhere near the White House again. And I know Joe is going to win in November. But it's also about the maps."

While Biden has consistently polled ahead of Trump in Wisconsin since the COVID-19 pandemic began, his lead in Marquette University's latest poll was 5 points, well within the survey's margin of error. Other recent polls have shown similar Biden leads.