In this April 5, 2016, file photo, Wisconsin voters cast their ballots in the state's primary at the South Shore Park Pavilion in Milwaukee. Charles Rex Arbogast/AP Photo

The place Hillary Clinton didn't campaign in 2016, the place the Democratic National Committee has anointed its quadrennial epicenter, the place that could decide it all.

It's the kind of talk the most skeptical among us — or those most wary of political punditry and prognostication, at least — may brush off as an echo of the same thing we hear every four years about any number of swing states: "We're important — the most important, in fact!"

But in Wisconsin in 2020, it could really be true. 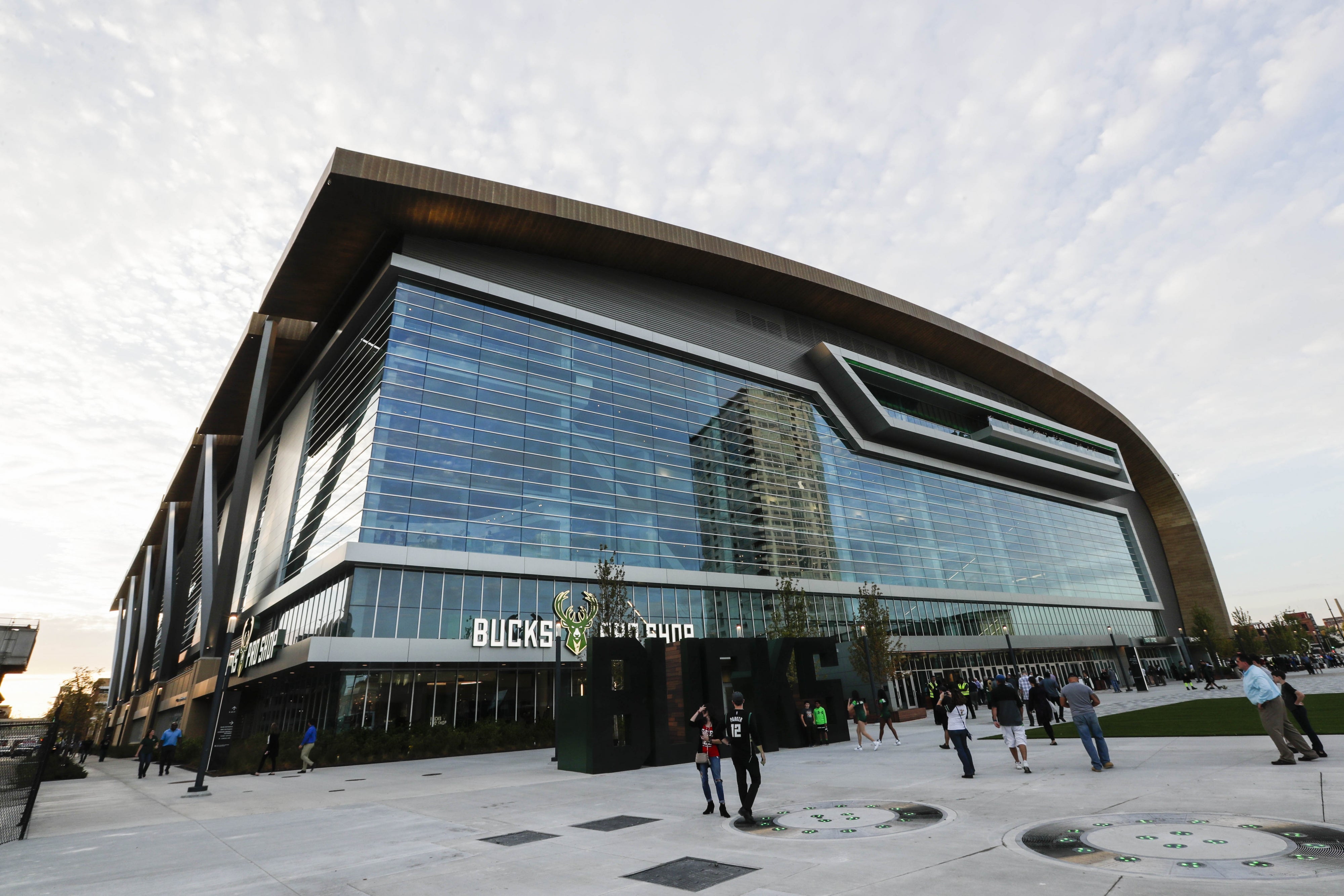 "Wisconsin could very much be the state that determines the election," said Amber Wichowsky, political science professor at Marquette University. "All eyes will be on Wisconsin."

All eyes and, once our April 7 presidential primary is over and the general election campaign in full swing, lots of campaign stops.

How did we end up here?

The short answer: We have a tendency, especially over the past four years, to decide elections by razor-thin margins. Neither party can take us for granted, and both very likely need us to win.

The longer answer is more complicated.

It comes down to the electoral college, increasing political polarization across the country and experts' best guesses about which way the political winds are blowing in the few states still considered toss-ups in 2020.

The Swing State: An Endangered Species?

According to Wichowsky, there are several reasons the number of swing states — states that have very narrow margins between their voters' political affiliation — has been steadily winnowing over the past few decades.

"Part of it is a reflection of the demographic changes that are happening across the country," she said. "The state electorates are just more reflective of one of the two parties' constituencies."

States like Colorado and Virginia, which used to be bigger toss-ups, have gained more young, college-educated, urban voters in recent years. Both states have voted increasingly for Democratic candidates.

Other states that were once considered more pivotal, like Ohio, Iowa and Indiana, are seen as situated more firmly in the Republican camp in 2020, in part because of their large populations of rural, white voters who didn't go to college.

A number of recent studies, including a 2018 analysis by the nonpartisan Pew Research Center, show those voters lining up more firmly behind Republican candidates in recent years.

When those trends are taken into account, most experts wipe the vast majority of states off the 2020 board, deeming them safely in the camp of one party.

When those "safe" electoral votes are doled out, President Donald Trump would have 205 of the 270 votes needed to win re-election. The Democratic nominee would have 232.

The remaining states with unallocated votes would be:

This collection of toss-up states tracks with lists compiled by The Cook Political Report, Politico, 270ToWin and Sabato's Crystal Ball, a political analysis website run out of the University of Virginia's Center for Politics.

Seth Moskowitz, who works for 270ToWin and Sabato's Crystal Ball, points out how political experts allocate electoral college votes from this point should be considered with a grain of salt. It's guesswork, to a certain extent — but educated guesswork.

"There are wild things that could happen," Moskowitz said. "But I think it's important to note that what you're doing is looking at the most plausible scenarios."

So, if there are a handful of 2020 toss-ups, why is Wisconsin getting an inordinate amount of attention?

It comes down to a plausible scenario in which Wisconsin is the final step in a Democratic plan to defeat the president.

The scenario has been raised and played out by many experts, including Moskowitz for Sabato's Crystal Ball and in articles in The New York Times, The Washington Post and The New Yorker.

"If you're just looking at where the president is positioned, the path of least resistance for Democrats is to win Wisconsin," reporter Nate Cohn said in a July episode of "The Daily," a podcast from The New York Times.

Under the scenario, the president wins the toss-up states of Arizona, Florida and North Carolina (where he does have positive approval ratings, after all), bringing his electoral college vote total to 260, compared to the Democratic nominee's 232.

Then the election would come down to three toss-up states, the fabled "blue wall"' from 2016: Michigan, Pennsylvania and Wisconsin. 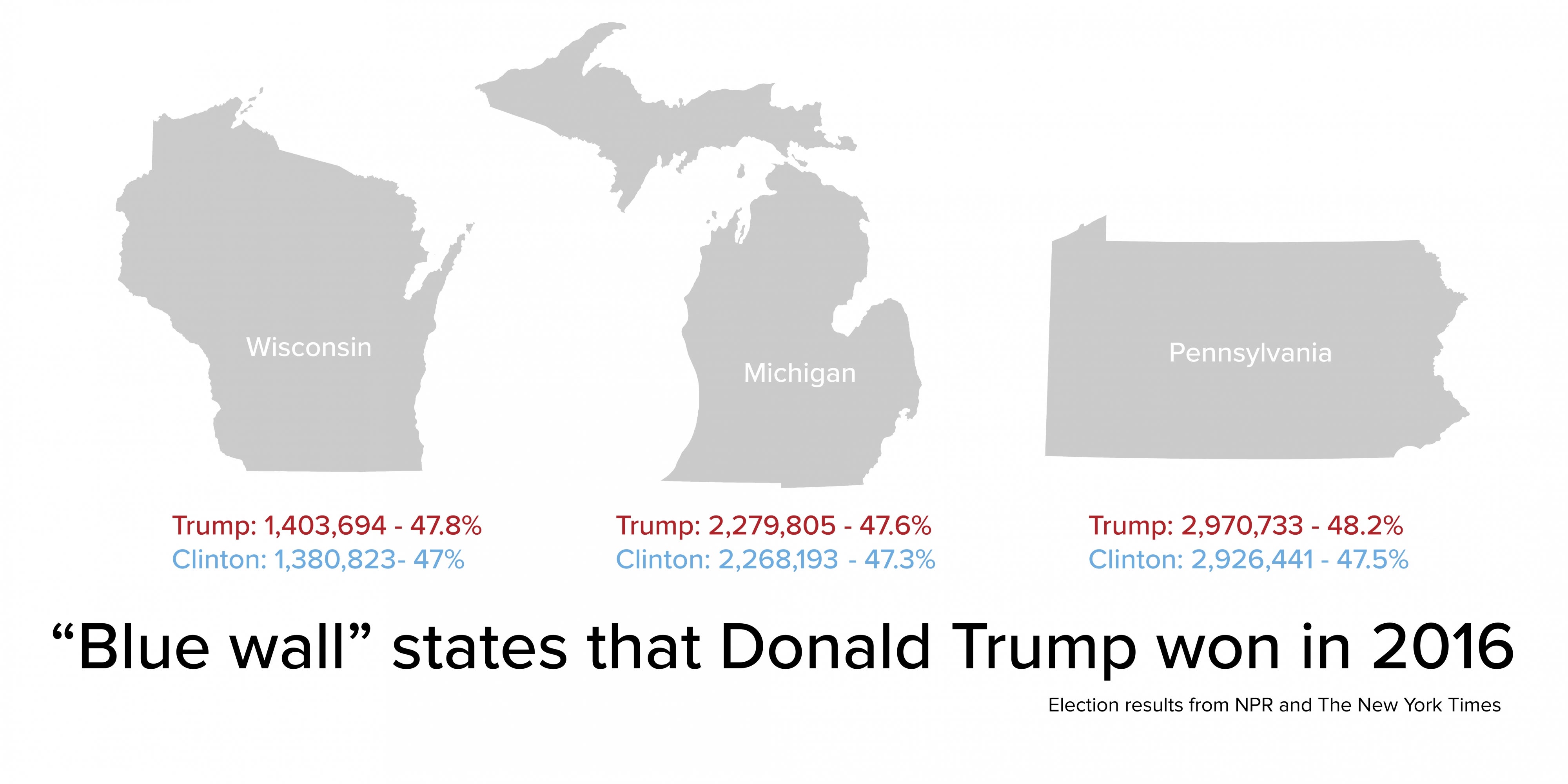 In order for the Democratic nominee to win the election, he would have to win all three. And experts believe Wisconsin would be the most difficult.

"It's looking like, in 2020, if the Democratic nominee is going to win Wisconsin, they will have already won Michigan and Pennsylvania," Moskowitz said.

Experts also argue especially lackluster 2016 turnout numbers in Michigan could rebound for Democrats in 2020 and several Pennsylvania Democrats have won recent races, including a 2019 election for a state Senate seat outside Pittsburgh long held by Republicans.

Michigan and Pennsylvania Democrats also won 2018 gubernatorial races by 9.6- and 17-point margins, respectively. A Wisconsin Democrat also won the governor's office in 2018, but by just 1.1 percent.

With Pennsylvania and Michigan's electoral votes allotted to Democrats, the president would have 260 and the Democratic nominee would have 268. Both short of the 270 votes needed, with one state remaining.

One state with 10 electoral votes to hand out.

You know the one.

"Neither party can fully take Wisconsin for granted. It's all up for grabs," said Amber Wichowsky, political science professor at Marquette University.

Yes, It Will Be Close

Wichowsky is quick to echo what many have been saying earnestly for months.

"Neither party can fully take Wisconsin for granted. It's all up for grabs," she said.

"We're talking about an election that's going to be decided by a few thousand, a few tens of thousand votes," Wichowsky said.

And so as politicians from across the country descend on Milwaukee in July and candidates crow about the importance of Wisconsin voters, rest assured they're not doing it in the spirit of some superficial, once-every-four-years appeal.

They mean it. They really, really mean it.