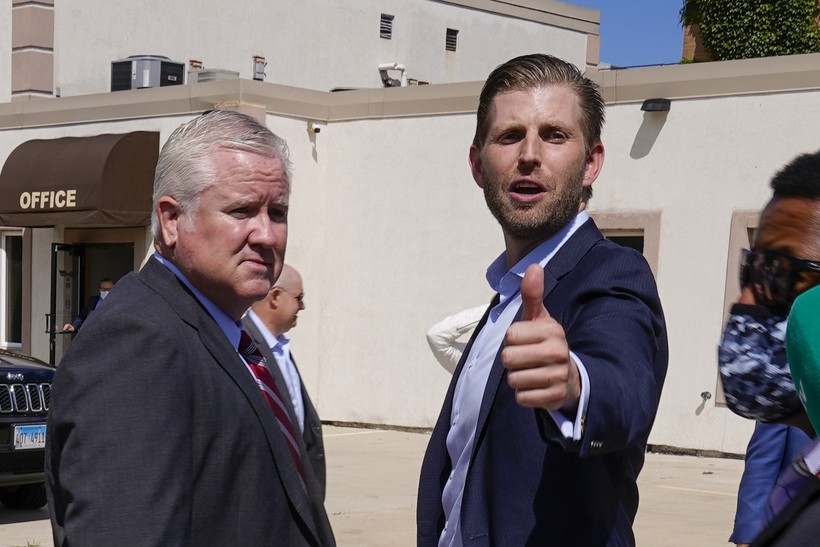 Eric Trump, son of President Donald Trump, gives a thumbs up to a few supporters after speaking at the Milwaukee Police Association, Tuesday, Aug. 18, 2020, in Milwaukee. Morry Gash/AP Photo

Eric Trump, son of President Donald Trump, spoke to law enforcement officers and their families at the Milwaukee Police Association on Tuesday. His appearance was one of several Trump campaign events scheduled in Wisconsin this week in response to the now mostly virtual Democratic National Convention that was supposed to take place in Milwaukee. The president himself was in Oshkosh on Monday afternoon.

Eric Trump's remarks were brief, but focused mostly on the protests against police brutality since the death of George Floyd in Minneapolis in May. He decried efforts to reduce or eliminate funding to local police departments.

He name-checked several cities where he felt protesters' actions had gotten particularly out of hand, and noted that he hadn't heard any of the DNC's speakers address those protests in the first night of the event, which he called, "pretty hard to watch."

Scott Hanna, a Trump supporter who wasn't able to get into the closed event but did swing by the building on Milwaukee's West Side, also cited protests in those three cities, plus New York, as cause for concern.

Hanna said that while he voted for Trump and has generally supported the Republican Party, he and his wife try to attend political events put on by both parties — but with DNC speeches and events being delivered virtually, he said Eric Trump was their only real opportunity to see a campaign representative in person in Milwaukee this week.

Trump's event also attracted some protesters. Bruce Fealk and his friend Tom Moran drove a rented truck carrying a papier-mache Trump head and flying "Ridin' for Biden" flags from their homes in Michigan to protest at Trump campaign events this week. They were in Oshkosh yesterday. 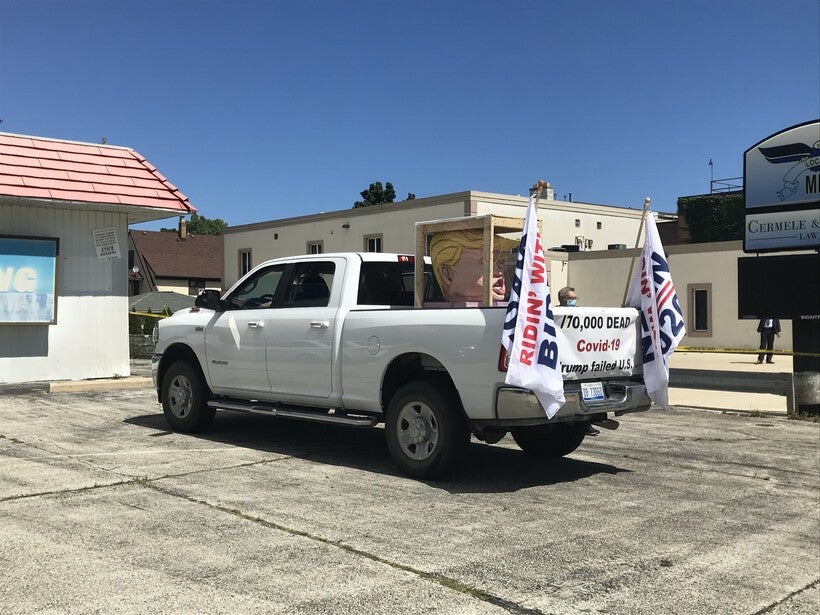 Bruce Fealk and Tom Moran of Michigan rented a pickup truck to carry a papier-mache Trump head and "Ridin' for Biden" flags to Trump campaign events around Wisconsin. The two men said they were distressed by the president's handling of the COVID-19 pandemic. Madeline Fox/WPR

Fealk said his grandchildren live in Madison, but the COVID-19 pandemic has made it impossible to visit as much as he'd like.

"Because of Donald Trump's incompetence, I wasn't able to see my grandchildren for five months — and I normally see them every six weeks," he said. "And so, to me, this is the most important election ever."

Eric Trump also used his speech to criticize the Obama administration, especially in how it handled relations with countries like Iran, China and Mexico, and international organizations like NATO and the European Union. He also took aim at the health care plans proposed by Joe Biden and other contenders for the Democratic presidential nomination, as well as their immigration proposals.

In keeping with his audience, though, he repeatedly returned to his father's support for law enforcement officers.

"You are the bravest, most incredible men and women. You're not thanked nearly often enough, but our nation does appreciate you, and we as a family love you," he said. "You've always been there for us, and I promise my father will always be there for the brave men and women."