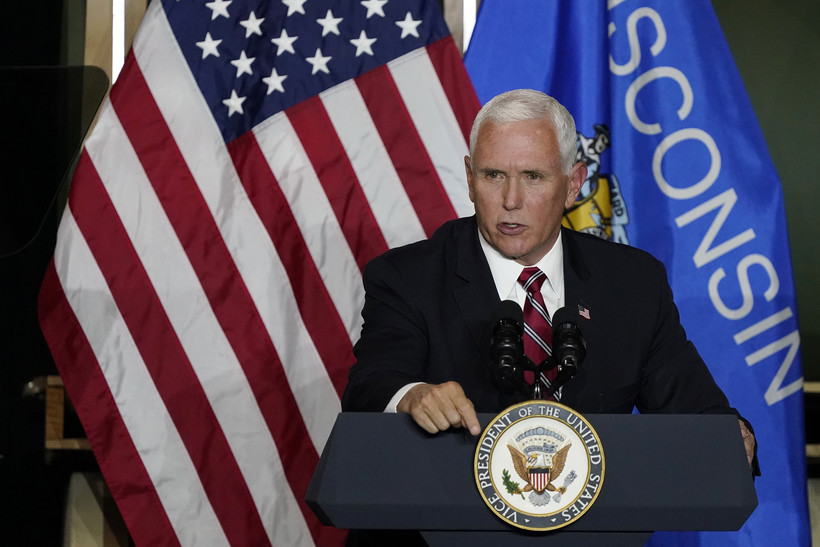 Vice President Mike Pence lauded the Trump administration’s response to the COVID-19 pandemic and how it will spur economic recovery at a campaign rally in southeastern Wisconsin on Wednesday, even as the virus continues to spread across the country.

Pence’s speech before several hundred people inside a manufacturing facility in Darien comes as a mostly virtual Democratic National Convention, which was initially expected to bring 50,000 people to Milwaukee, continues this week. The visit also comes just two days after President Donald Trump campaigned in Oshkosh. The president spoke before a crowd of about 1,000 at an airplane hangar at the Wittman Regional Airport, focusing mostly on the economy.

"I know the president was in Wisconsin on Monday, his son Eric was here yesterday and I’m here today," Pence told the crowd. "And I do hear the Democrats were supposed to have their national convention in Wisconsin, but they couldn’t make it. Of course, that’s really nothing new."

Democrats, including Gov. Tony Evers, have been critical of the in-person campaign events in Wisconsin because they fly in the face of public health guidance during the COVID-19 pandemic. Evers urged the president and vice president to "wear a freakin' mask" during their visits. Pence did not wear a mask during his remarks, but spent several minutes directly addressing the pandemic.

"From early in this pandemic, the American people saw the leadership of this president shine through," Pence said. He also predicted the country is, "well on our way to having our first coronavirus vaccine before the end of this year."

According to the latest Marquette University Law School poll, about 40 percent of Wisconsin residents think Trump has handled the pandemic well.

Attendees at Pence's event had to pass a temperature check at the door in order to be admitted into the building. They were also offered a free mask and hand sanitizer upon entry, but many chose to forgo the mask and didn’t follow social distancing guidelines once situated in front of the stage.

Metal folding chairs in front of the vice president’s podium were not spaced out and standing members of the crowd stood in close quarters, chatting and waving bookmark-sized campaign handouts and red signs that said "Jobs! Jobs! Jobs!" to move air around. 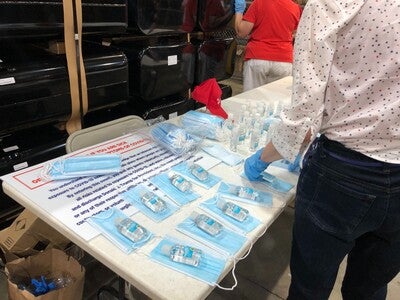 The vice president spoke at Tankcraft Corp., a metal fabricator in the southeastern Wisconsin community of Darien, about 20 miles from Janesville. His visit is the latest of several campaign stops for the vice president in Wisconsin this year, including events in Madison in April, Waukesha in June and Ripon last month. Trump also visited Green Bay in June.

Like the president’s visit earlier in the week, Pence focused on the economy.

Southeastern Wisconsin is seen as a solidly conservative part of the state. It is represented in Congress by Republican U.S. Rep. Bryan Steil, who succeeded former House Speaker Paul Ryan.

Steil addressed the crowd before Pence took the stage.

"We know the vice president knows Wisconsin, he knows our values," Steil said. "Unlike Joe Biden and national Democrats who won’t even come to Wisconsin for their own national convention."

Wisconsin is seen as a key swing state in the 2020 presidential race, if not the most important state.

Much like their virtual convention, Democrats have opted for online campaign events in Wisconsin instead of in-person speeches or rallies. Democratic presidential nominee Joe Biden spoke at virtual events targeting La Crosse and Milwaukee-area voters in May.

"His chaotic trade wars have led to financial ruin for farmers," Bewley said. "Forced to dump milk, dispose of their herds, and destroy their crops, hundreds of family farms have shut down during the course of these three and a half years."

According to the latest Marquette University Law School poll, Biden leads Trump by 5 points among likely voters in Wisconsin. That is within the poll’s margin of error.