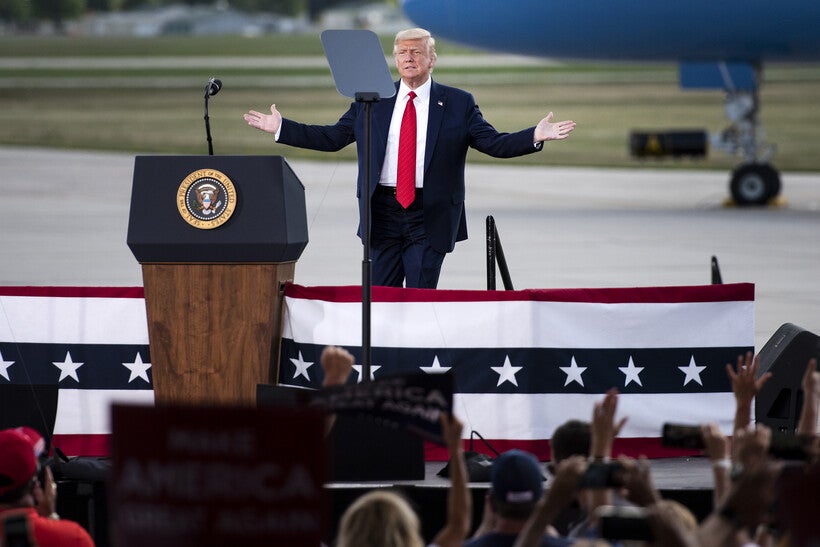 President Donald Trump approaches the lectern during a rally in Oshkosh on Monday, Aug. 17, 2020. Angela Major/WPR

He spoke to an enthusiastic audience of around a thousand at Wittman Regional Airport, focusing on jobs and the economy. Trump joked repeatedly that the event wasn’t a rally, but a "peaceful protest" — a more acceptable format amid the pandemic.

"We’re not allowed to do rallies, right, because of rules and regulations, which we want to adhere to," he said.

Trump promised to deliver the country its best economy in history if he’s reelected, touting the support his administration has provided families amid the coronavirus pandemic.

The president specifically cited the Paycheck Protection Program, which he credited with saving a million jobs in Wisconsin, and his recent executive order to suspend payroll taxes for many U.S. workers, promising to forgive the payments if he’s reelected. The latter could face legal challenges.

The NASDAQ reached an all-time high Monday despite the pandemic, Trump noted.

"I took the greatest economy and closed it up and saved millions of lives," he said.

The president told his supporters they should expect some good news in terms of coronavirus therapies and a vaccine. 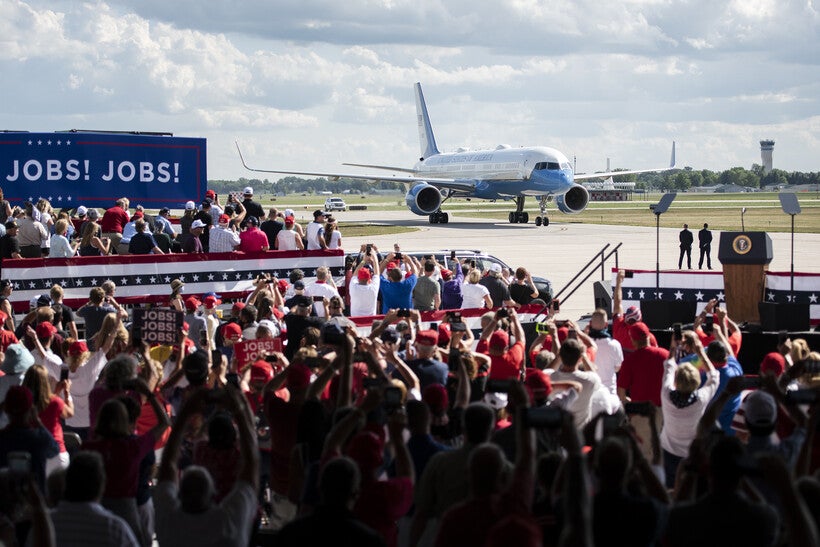 Air Force One lands in Oshkosh before a speech from President Donald Trump on Monday, Aug. 17, 2020. Angela Major/WPR

It’s the most important election in American history, Trump said, calling presumptive Democratic presidential nominee Joe Biden a "puppet" of the radical left and a "Trojan horse for socialism," garnering cheers from the crowd.

Supporters also gathered outside the event, some hoping to get a glimpse of Air Force One, they said. Oshkosh native Jennifer Magargle, 27, set up chairs under a shade tree with family members including her daughter and mother-in-law.

"I think it's a great thing that he's coming out here, and it kind of gives us a little bit of encouragement during these times," she said.

The event marked Trump’s second visit to northeast Wisconsin this year. In June, the president visited Green Bay, where he recorded a town hall meeting broadcast on Fox News, and Marinette, where he spoke to workers at Fincantieri Marinette Marine.

On Monday, Trump said it’s been an incredible experience getting to know the people of Wisconsin.

The events coincide with the start of the Democratic National Convention, which began Monday. The event was originally expected to bring 50,000 visitors to Milwaukee. That was before the DNC opted to go almost entirely virtual due to the COVID-19 pandemic.

In a statement, the Biden campaign condemned Trump for holding an in-person event as Wisconsin’s coronavirus case count continues to rise.

"The only reason Trump should be coming here during the pandemic would be to deliver desperately needed testing supplies, which his administration has reportedly and inexplicably diverted away from the state," the statement said.

Biden will not travel to Wisconsin to accept the Democratic nomination, he announced earlier this month. The Trump campaign launched billboards this week in Milwaukee that read, "Where’s Joe?" Magargle said it speaks volumes about the president that he’s visiting Wisconsin in person.

"As President Trump comes to Oshkosh, Wisconsin, today, we are reminded of his failures of leadership," U.S. Sen. Tammy Baldwin said on a Monday morning call organized by the Democratic Party of Wisconsin, citing the federal government’s lack of a national coronavirus testing and contact tracing program.

She also noted that the administration has diverted over $100 million in defense spending from Oshkosh Corp., a Wisconsin-based heavy machinery company, toward the border wall between the U.S. and Mexico.

"When the president ran, he promised Mexico would pay for this wall, not Oshkosh," she said.

Northeast Wisconsin is set to play an important role in the November election. A Marquette poll released last week showed Biden holds a 5-point lead over Trump in the region, but pollster Charles Franklin said the candidates have traded the advantage there in recent months.

On Monday, Trump thanked Wisconsinites for voting for him in 2016 and vowed to win the state again.