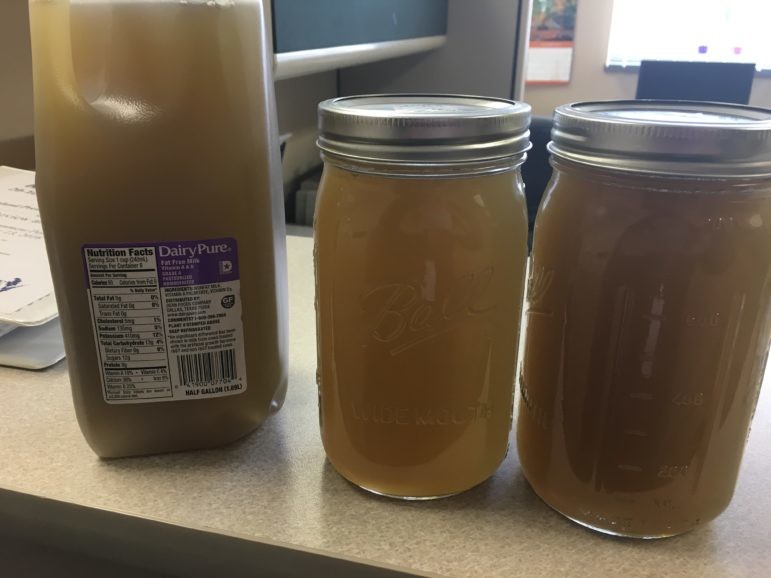 Some Cancers, Adverse Birth Outcomes May Be Tied To Nitrate Exposure
By Danielle Kaeding
Share:

Nitrate pollution in drinking water is linked to negative health outcomes that are costing people in Wisconsin anywhere between $23 million and $80 million each year in medical expenses. That's according to a new report published this week in the journal Environmental Monitoring and Assessment.

The report analyzed nitrate exposure using test results from public and private water supplies. The report's lead author, Paul Mathewson, a staff scientist at Clean Wisconsin, said they applied a previous study's model to Wisconsin data to get an idea of the health impacts linked to nitrate in drinking water.

The report found 111 to 298 cases of colorectal, ovarian, thyroid, bladder and kidney cancer may be caused by nitrate contamination each year. The findings also showed between 26 and 149 cases of adverse birth outcomes, including low birth weight or very pre-term birth, may also be tied to nitrate exposure.

"The most susceptible population is probably pregnant women because not only is it for them that potential cancer risk increase, but then also developmental impacts on the developing fetus," said Mathewson. "But, it's important to recognize that nitrate does affect all segments of the population. It's not just the infants."

Researchers acknowledged limitations with determining health impacts linked to nitrate. The epidemiological studies underlying the report's findings can't account for all factors that may cause disease, said Olga Naidenko, the report's co-author and researcher with the Environmental Working Group.

"There are many reasons why a child may be born with very low birth weight or why a child would be born very pre-term, but what we see is that there are studies showing that for populations that have more nitrate in their water, these types of adverse health effects are more frequent," said Naidenko.

Groundwater is the primary source of drinking water for more than two-thirds of Wisconsin residents. Around 28 percent of people get their drinking water from private wells, which aren't required to be tested for contaminants like nitrate.

The report found nitrate contamination was more often growing worse than improving in Wisconsin among nearly a quarter of roughly 3,800 public wells from systems that serve restaurants, taverns and churches. Around 76 percent showed no significant trends in nitrate contamination.

Researchers hope the study will aid policymakers when they're making decisions regarding farming practices that may contribute to nitrate contamination in drinking water, said Scott Laeser, water program director for Clean Wisconsin.

The report found a 40 percent reduction in nitrates statewide would reduce associated medical costs by 22 percent.

Mark Borchardt, a U.S. Department of Agriculture research microbiologist, is among researchers who reviewed the report's findings. Borchardt has studied contamination of private wells in northeastern and southwestern Wisconsin.

"This is a good first stab at trying to estimate the health effects," said Borchardt. "Subsequent work will, I'm sure, improve upon that."

Concern over the safety of drinking water has grown as recent studies have shown groundwater contaminated with nitrates or fecal matter in wells across northeastern and southwestern Wisconsin.

In 2018, the DNR imposed restrictions on manure-spreading across 15 counties in northeastern Wisconsin in response to drinking water that was contaminated with nitrates and other bacteria. The agency is in the process of crafting rules in areas with soils that are vulnerable to groundwater contamination.

The Wisconsin Dairy Business Association has said the state should focus on standards that are reasonable for farmers to achieve, as well as enforce existing standards for all farms. The group has also pointed to farmer-led watershed groups that have worked to preserve soil health and reduce farm runoff by encouraging conservation practices.

Gov. Tony Evers dubbed 2019 the "Year of Clean Drinking Water," and Assembly Speaker Robin Vos, R-Rochester, convened a task force that held meetings throughout the year that produced more than a dozen bills. That legislation was introduced in January to address a variety of issues, including groundwater pollution from manure runoff and contaminated wells. Many of the bills passed the Assembly with bipartisan support, but they died in the Senate.

Lawmakers from both parties have said they want to reintroduce that legislation in the next session.