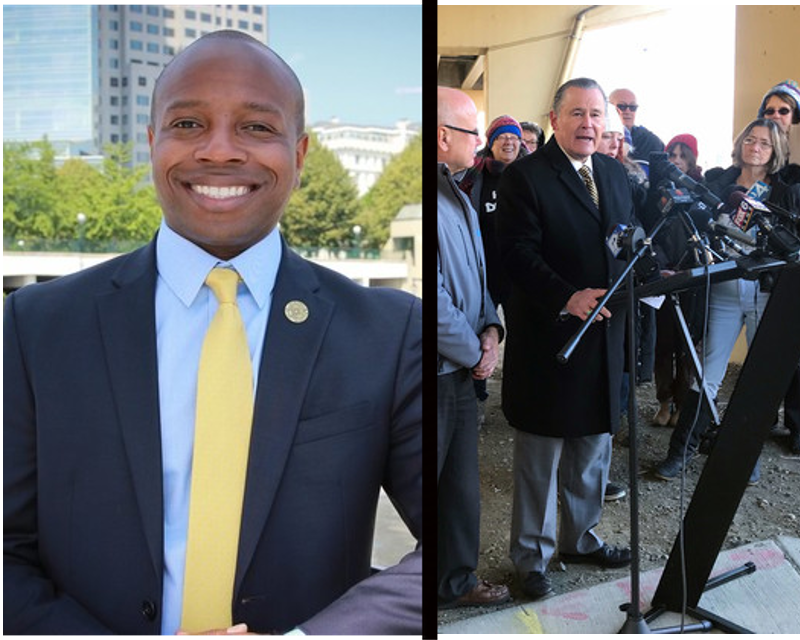 Milwaukee's relationship with state government was one of the numerous topics up for discussion at a mayoral debate on Monday as the city's April 5 election to select a new mayor approaches.

The nonpartisan Wisconsin Policy Forum hosted the debate, which featured the two candidates who advanced out of the Feb. 15 primary.

Both Acting Mayor Cavalier Johnson and former Alder Bob Donovan said the city needs to rebuild its connections with Madison. Milwaukee has faced years of declining shared revenue, a form of state funding for local governments.

Johnson said federal stimulus money would help cover budget shortfalls, but he said in the long term, the city needs more ways to sustainably raise money for its budget.

"I'm going to continue working with folks in Madison because I'm a political realist and understand that Republicans are in charge of the Legislature," Johnson said. "We have to work with them to move things forward."

Johnson said he also wanted to work with the state to transfer new city and county employees to the Wisconsin Retirement System and slowly phase out the city's pension system.

"I think that puts us in a position where we have greater ability to control our financial future," he said. "Everything, I think, has to be on the table to make sure that the city is able to survive, and that we're able to provide services to the people who both expect them and quite frankly, deserve them."

Donovan agreed that "everything needs to be on the table to explore the best way to move forward." Donovan, a self-proclaimed conservative in the nonpartisan election, said if he became mayor, he would support an audit of city departments to ensure they're operating effectively and efficiently.

"I look at this challenge as an opportunity for us to re-imagine how we deliver our services to our citizens, how we do local government and how we pay for it," Donovan said. "This opportunity, we need to capitalize on and move the city forward in that direction so that we are not limping every year from one budget to the next."

"I don't want to see cuts to the police department," Johnson said. "The reality is that we have to be able to pay for it and we have to level with the people in this community in order for them to know that. And we've got to encourage not just our citizens, but also folks in the business community to be our partners as well."

"The city of Milwaukee is faced with a public safety crisis," he said. "We cannot expect our police department to adequately address those problems without the appropriate level of manpower."

Donovan echoed his rhetoric on crime from a February debate, saying criminals need to be held accountable.

"I believe the policies that have been enacted in many of the last years are soft on crime and have created an atmosphere in this community where the criminal element feels they will not be held accountable," Donovan said.

Johnson showed his support for the city's Office of Violence Prevention.

"We have issues in this community, right, where we need to rebuild relationships with the police in the neighborhoods, that certainly is true," Johnson said. "The Office of Violence Prevention is a partner to help to do that."

The candidates differed on their assessments of local government's performance during the COVID-19 pandemic.

Johnson noted the pandemic's disproportionate impacts on the city's Black and Latino communities.

"These are areas where we have to be more nimble and we have to have new approaches to make sure that we're getting information and also vaccinations out to those communities that need them," Johnson said. "Overall, I think the health department has done work that they never probably would have thought that they would have done reaching out to community and being on the ground being essentially sort of like a COVID first-responder."

Johnson said that approach needs to continue beyond the pandemic.

"There are certainly other diseases and other health issues that we have in the city, and we could really use our health department to be at the forefront to help us to mitigate those effects in our community as well," Johnson said.

Donovan mentioned his support for mobile health clinics that would work in underserved neighborhoods. He also said he wants to create a medical advisory board to work with the health department and advise the mayor on the various health concerns facing the community.

"Over the last two years, people's trust in government has been challenged," Donovan said.

The future of K-12 education

The candidates also focused on the role the mayor plays in the city's schools, along with what lies ahead for Milwaukee Public Schools.

"(Education) is absolutely critical to the well-being of this city," Donovan said. "We cannot have a great city without great schools."

Donovan voiced his support for school choice, saying "it's critical that we empower our parents to make the best possible choices for their kids." He expressed skepticism over a plan in the Legislature that would break up MPS into multiple smaller districts.

"I am however, encouraged that there are members, powerful members of the state legislature that are willing to work with us to explore every way possible that we can improve our schools," Donovan said. "It is the only ticket out of poverty, and we need to provide the absolute best education for our kids in a variety of ways and opportunities."

Johnson mentioned he hadn't been contacted regarding the breakup proposal.

"I would think that if legislators in Madison are really concerned about education in Milwaukee, then they should be working to fix those root cause problems that we've talked about."

Johnson said while the mayor's role is limited with the existence of a democratically elected school board, there are still ways for the mayor to make a difference.

"If a kid is going to school and they're hungry, well, that's something that a mayor can do something about," Johnson said. "That's where my time and my energy will be focused as mayor, is on those things on the outside so that kids are prepared to go in to learn in the classrooms."

As the debate continued, the candidates also discussed issues such as Milwaukee's streetcar system, which remains free to ride.

Donovan said he would want referendums on potential expansions to the system.

"The citizens are the ones who have been left holding the bag paying for this huge public works project that, in my opinion, never enjoyed the support of the majority of our residents," Donovan said.

Johnson said he saw the system as an economic development tool.

The candidates were also asked about the city's lead pipes, which both candidates said they support removing, and the city's approach to affordable housing.

Donovan said he wanted to help people get to a point where they no longer need to rely on low-income housing.

"That's what our city needs, to move forward toward helping our people succeed in life, and not keep them down," Donovan said.

"But Bob's right, we got to work to make sure that people have higher wages here so that they can support themselves and support their family and have some financial breathing room in this city," said Johnson.

Donovan and Johnson will debate again at a forum held by the Milwaukee Press Club on Wednesday night. That event is set to be livestreamed.

The winner of the April 5 election will serve out the remaining two years of former Mayor Tom Barrett's term. Depending on the results, Milwaukee could have either its first elected Black mayor or its first conservative mayor.