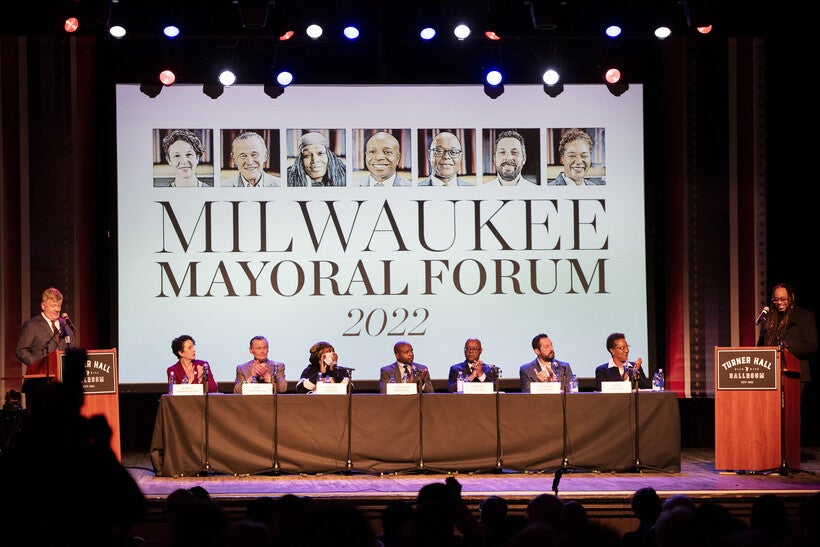 Milwaukee mayoral candidates sit on stage before taking questions from attendees during a forum Wednesday, Feb. 9, 2022, at the Turner Hall Ballroom in Milwaukee, Wis. Angela Major/WPR

Early voting continues in city's first mayoral election without an incumbent since 2004
By Christine Hatfield
Share:

The seven candidates competing in Milwaukee's mayoral primary focused on topics including reckless driving and housing at a forum on Wednesday night.

All of the candidates in the race were at the event at the Turner Hall Ballroom in the city's downtown. The impending primary will be the city's first mayoral election without an incumbent since 2004.

Early in the forum, the candidates were asked to share plans for reducing reckless driving in the city. According to Milwaukee police data, 66 people died last year as a result of car crashes. More than 350 people suffered serious injuries. At the same time, according to police data, more than 1,000 instances of auto theft have been reported in the city so far in 2022. 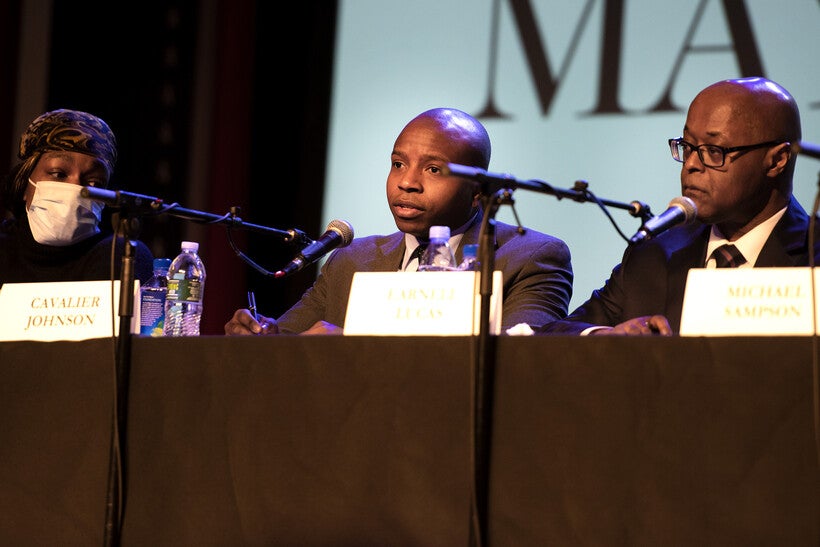 "I think about a child that would get in a car, perhaps a stolen car, and crash into anyone or anything," Dimitrijevic said. "That's a failure of the city and society, and we need to look in the mirror and make sure we're providing support and resources."

Alderman Bob Donovan said an "atmosphere of lawlessness" has taken hold in Milwaukee. He said he supports stepped-up law enforcement in the city.

"There apparently seems to be no consequences for people's criminal behavior, and that needs to change," Donovan said. "Steps need to be made to restore (the Milwaukee Police Department) to the appropriate level of manpower to do their job effectively and proactively."

"There are a number of things that we can do to address reckless driving," Johnson said. "We're already working on those, we'll continue to do it because this is an issue that's a concern all throughout the entire city of Milwaukee." 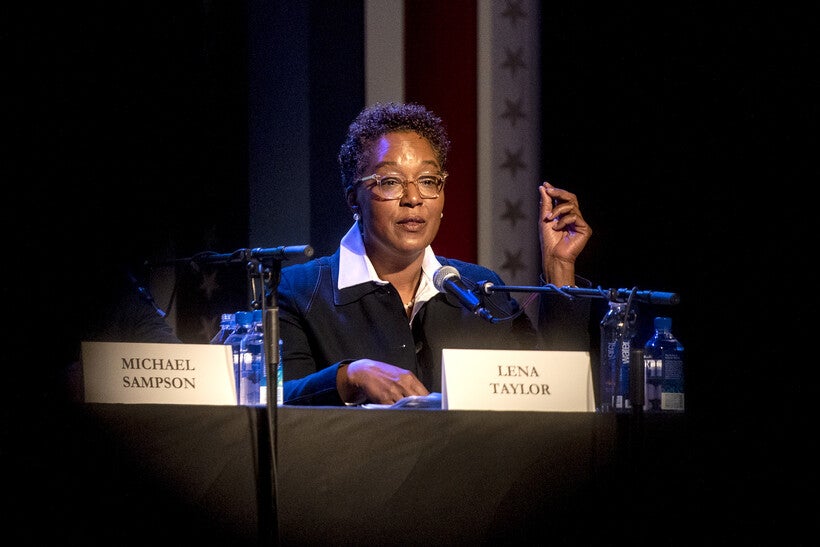 Community activist Ieshuh Griffin said problems with reckless driving also include drunken driving. She said she was the victim of a drunken driver as a child.

Business owner Michael Sampson advocated for focusing on specific areas of the city, and said red light cameras would bring in revenue for the city.

"They'll send tickets in the mail and you'll stop speeding around the city," Sampson said. 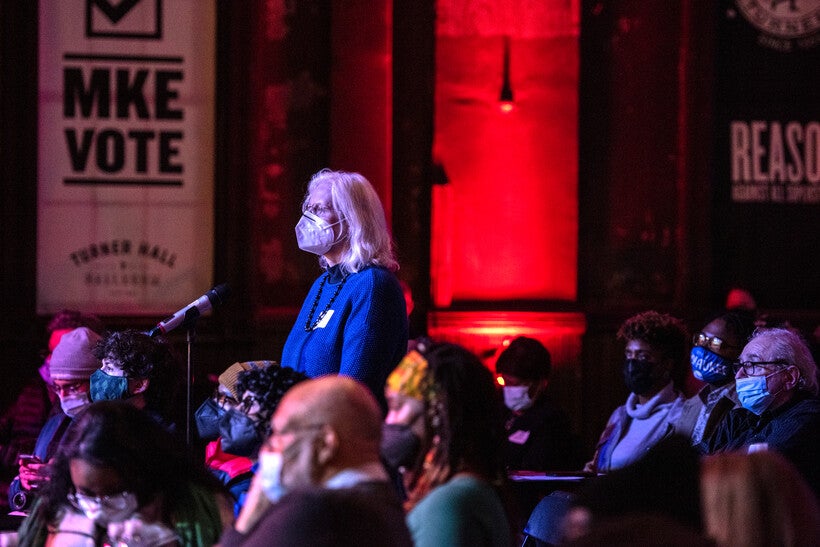 A forum attendee asks the Milwaukee mayoral candidates a question about reckless driving during a forum Wednesday, Feb. 9, 2022, at the Turner Hall Ballroom in Milwaukee, Wis. Angela Major/WPR

It's currently illegal to install cameras at intersections in Wisconsin, although state lawmakers have attempted to pass legislation to allow red light cameras.

Milwaukee County Sheriff Earnell Lucas said solutions to reckless driving depend on education, engineering of roads and enforcement. He called for asking automakers to do more about the designs of their cars.

"This is our 1960s seatbelt problem," Lucas said. "Unless and until we get all of the entities in the city working together to bring pressure to bear on the automakers, we won't see no immediate remedy in Washington."

Johnson said plans to fix up homes owned by the city before selling those homes to owner-occupants would bring stability to Milwaukee's neighborhoods.

Donovan said he supports working with Habitat for Humanity and creating a rent-to-own program. He said there are programs from other communities the new mayor could bring to the city.

"I have always been a believer that we don't have to reinvent the wheel," said Donovan.

The candidates also debated subjects ranging from the state of the city's finances to Milwaukee Public Schools. The full debate is available to view on YouTube.

Early voting began Feb. 1, and continues until Saturday. The two candidates who receive the most votes after the Feb. 15 primary will move forward to the general election on April 5.