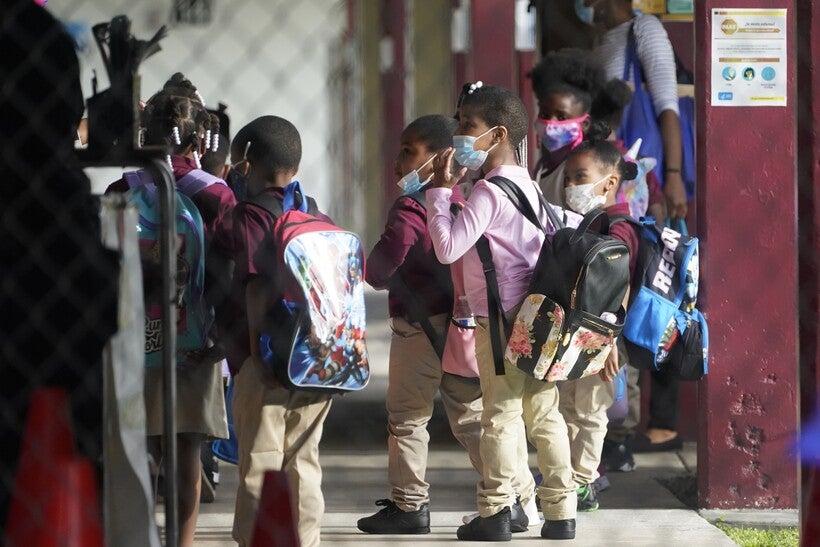 As Enrollment Declines, Some School Districts Feel The Effect More Than Others

Virtual Charter Enrollment Is Up, Some Districts Saw More New Faces, And Others Are Facing Uncertain Financial Futures
By Madeline Fox
Share:

This school year has thrown an unprecedented number of curveballs at Wisconsin school districts.

Districts have had to put together virtual learning programs. They've had to shrink class sizes or rotate students in and out of classrooms in smaller groups, and pivot quickly to distance learning when COVID-19 triggered quarantines or staff shortages. They've had to reassess staffing plans as teachers retired early or quit. And all the while, they've tried to provide as much normalcy for children as possible.

For many districts, the annual enrollment data released last week by the state Department of Public Instruction brought yet another challenge.

Statewide, Wisconsin saw a drop in the number of students enrolled in 4- and 5-year-old public kindergarten, two grades that aren't mandatory under state attendance laws and can be more difficult to wrangle via virtual learning. That contributed to a 3 percent drop in enrollment statewide from the prior year.

At a district level, those changes in enrollment were felt differently. Some districts actually saw enrollment gains — in some cases, after several years of modest declines. The state's two largest urban districts in Milwaukee and Madison fell in line with the state average, with enrollments decreasing by just over 3 percent. In comparison, their 2018 and 2019 declines over the prior year didn't even crack 1 percent.

Schools with bigger declines than usual are particularly nervous. Their September student count helps determine how much funding they get from the state, which makes up the largest part of many schools' budgets. With the unprecedented costs of COVID-19, and possible threats to future state and local funding on the horizon, a drop in enrollment is one more piece of bad news.

'It's Obviously Better To Have The Bodies In Seats'

Several districts that saw massive increases — such as the McFarland School District, with a 20 percent jump — didn't actually have more students enrolled in their traditional classrooms, but in the virtual charter schools housed within their district. McFarland business director Jeff Mahoney said traditional district schools actually saw a slight decrease in enrollment of 2.9 percent, while Wisconsin Virtual Academy accounted for more than 1,000 new students. The Gilman School District, home to eSucceed Virtual Academy, similarly, had a 40 percent increase in enrollment driven by new virtual charter students.

Other districts with enrollment increases did see more students in traditional classrooms. The School District of Milton, just north of Janesville, gained 13 new kindergartners and 54 students across grades 1 through 12. Even after a decrease in pre-K enrollment, that amounted to an almost 2 percent increase for the district of around 3,500 students.

Milton superintendent Richard Dahman said his district was expecting a slight decline, on par with previous years. He said the unexpected increase came thanks to around 50 new students arriving from other districts via open enrollment, and another handful of students from Milton-area families who had previously open-enrolled in other districts.

"We know that those aren't necessarily a headcount that we can rely on moving forward, so we're going to be really cautious with our long-term planning," he said. "But it's obviously better to have the bodies in seats than to be facing the difficulties that come with declining enrollment."

Dahman said he can't be sure what appealed to families joining the district this year, though he noted Milton's COVID-19 plan has been working relatively well. About 20 percent of students are all-virtual. The others either attend in-person classes every day in a small cohort, or do a mix of in-person and virtual instruction, depending on grade level.

As of Friday, Dahman said they hadn't had to change their plans because of possible or confirmed cases of COVID-19, although Dahman said one classroom did briefly have to go all-virtual while quarantining.

The COVID-19 safety measures have not come cheap. Having an enrollment increase will net Milton more in per-pupil aid and other income based on its number of students, but Dahman said it won't offset the staffing increases, additional bus routes and other measures his district has taken in response to COVID-19, in part with the help of CARES Act funding.

"Doing education well is harder than it has ever been right now," he said. "We can do that in the short term with the funding we have available, but it isn't something that we'd be able to continue without increased funding from the state or federal government."

Milton is still in a better position than schools that saw declining enrollment. Smaller districts, for whom a loss of 40 or 50 students amounts to around 10 percent of their student body, are facing many of the same mounting COVID-19 expenses as Milton. At the same time, the enrollment decline will mean less funding to cover them down the road.

Tim Raymond is the superintendent of the Cambria-Friesland school district, and its elementary school principal (He is also the guardian to what might be the district's most beloved staff member, Bernie the therapy dog). His district lost 44 students, marking a nearly 11 percent decrease in enrollment from the year before — compared to 1 and 4 percent drops in 2019 and 2018, respectively.

Raymond said the decline happened due to increased homeschooling and families moving away, trends that he attributes the pandemic, "and family situations that arose because of the pandemic."

The latest data shows 329 students enrolled in the district, down from 369. It's a small-enough district that Raymond knows each family well enough to have a good grasp of why they left.

He said that because his district is a rural one in what he describes as the "south-central, southeast" area of the state, it's accustomed to losing families to larger districts, particularly in the Madison area, as their families seek more job opportunities. He said that may have been exacerbated by a COVID-19-induced recession.

Raymond said it's hard to project what this year's decline means for Cambria-Friesland down the road, and whether there will be enough students to support the district 10 or 20 years in the future.

"In a district like ours, two families that move in with five children each, or two families that move out with five children each, that's a huge swing," he said. "If you have a school district of 1,500, 1,700, 2,000, you really get strong trends — you know your industry that supports that community, you know the future of the economic development of that community. Whereas the smaller you are, those numbers make it much more difficult to project."

Summer School Declines Are Key Concern For Some Districts

The School District of Cadott Community near Eau Claire is double Cambria-Friesland's size, but still small enough that superintendent Jenny Starck also knows her district's families well. The district lost 55 students in the 2020 count, nearly four times as many as in 2019.

That drop didn't come as much from changes to kindergarten enrollment, where Cadott Community actually gained students. Starck said they had far more families opt to homeschool this year than in previous years, likely because of COVID-19. Pandemic pressures also bumped up against a pre-pandemic problem of limited housing in the district, she said.

"In general, developers are looking more to the Chippewa Falls-Eau Claire area than to our area," she said.

Starck said she's also accustomed to families moving between neighboring Stanley-Boyd and Cornell and her district. As in Cambria-Friesland, those small changes sometimes have a large impact on the district.

A district's enrollment numbers are used to determine how much money schools can pull in through a combination of state aid money and property taxes. Those revenue limits are based on a three-year "rolling" average of September enrollment and 40 percent of summer full-time enrollment.

Statewide, summer school enrollment was down by more than 50 percent from 2019, with 11,388 fewer students taking summer classes. Though summer school makes up a smaller part of the revenue limit formula, the drop was so substantial that many districts are particularly worried about what will happen when it's factored in. Many are asking lawmakers to adjust the formula, or hold districts harmless for their summer school drops — and, in some cases, for school year enrollment during the pandemic.

"One of the things that helps us, and I imagine a lot of other schools, are usually you have summer music lessons, you have summer weight training — things like that that kids come in for," said Starck said. "Because of COVID, we didn't have that."

For Cadott, said Starck, the summer school enrollment number used in state calculations — typically lower than the actual head count of students, since summer schools don’t operate full-time or for the entire season — is usually around 18. This year, with many children and families burnt out on virtual schooling, it was zero.

"That will have a big impact on us, going forward," she said.